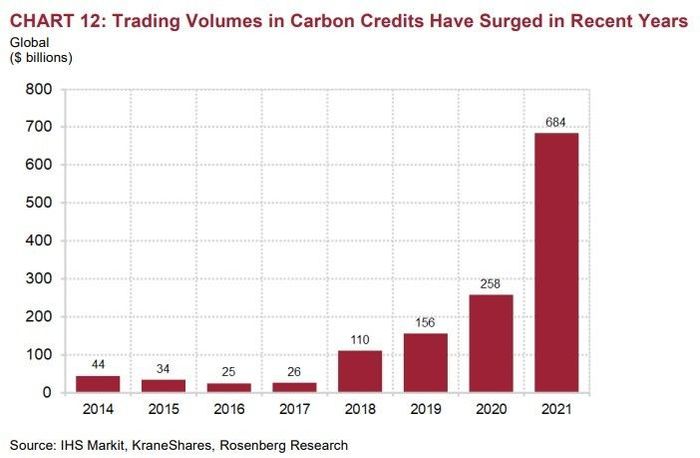 Instead of stocks and bonds, perhaps a slice of a portfolio should go to carbon credits, says this strategist. Read More...

So far, 2021 hasn’t been a great year for either side of the conventional 60/40 portfolio.

Stocks, as measured by the S&P 500 SPX, +0.43%, have dropped 6% this year. Bonds, as measured by the S&P U.S. government bond index, also have dropped 6% this year. And looking at the longer term, future stock-market returns may be lower due to elevated valuations and slowing growth, and bond returns could struggle in a new inflationary environment, making the historical roughly 8% annual return for the 60/40 portfolio tough to achieve.

David Rosenberg, the longtime Wall Street veteran and chief economist and strategist at Rosenberg Research, offers an interesting way to spice up that portfolio: carbon credits. While the global volumes of nearly $700 billion are still relatively small, they have been growing rapidly as the world tries to meet the climate objectives in the Paris Agreement. Europe has the largest marketplace, but there are others, including in California as well as a group of Eastern U.S. states.

Rosenberg says there is still plenty of growth left, as just 20% of global emissions are covered by some sort of carbon price, whether that is a tax or a cap-and-trade system. “With 2030 fast approaching, the chance that further cap-and-trade systems come online for portions of the remaining 80% of unregulated emissions is non-trivial in our opinion (though, admittedly, some governments will likely go the tax route),” he says. China just launched its trading program, and while it so far only covers coal and gas-fired power plants, the country plans to expand it to other industries.

He adds that the cost of carbon credits are less than that of decarbonizing technology. “While eventually R&D breakthroughs will get to a point where the economics will switch, it does not appear that we are there just yet,” he says.

The IHS Markit global carbon index, which tracks the most liquid segments of the carbon credit futures market, has delivered an annualized return of 29% since its inception in 2014, far better than the 10% return for stocks, 1% return for bonds and fractionally higher gain for commodities over this time frame. However, its annualized volatility is twice that of stocks, and there have been four separate 30%+ drawdowns since the middle of 2014.

For a portfolio, Rosenberg points out not only are carbon credits favorable on a risk-adjusted basis, they also have a low correlation to other asset classes. He says allocating a 10% weight to carbon futures in a portfolio would have generated an 8% return, against 6.4% for the traditional 60/40, on slightly lower volatility. “We are not recommending investors indiscriminately shift 10% of their portfolio into carbon credits. But, given the fact that this asset has offered favorable risk-adjusted returns in the past, and led to an improved Sharpe ratio in a theoretical portfolio, we believe it is worth considering as a potential investment,” he says.

The simplest way to add carbon credits, he says, is via the KraneShares Global Carbon Strategy ETF KRBN, +2.40%, which is benchmarked to the IHS Markit global carbon index. It should be noted that ETF’s year-to-date performance is….also a 6% decline.

French President Emmanuel Macron is overwhelmingly the favorite to win re-election, but his lead in polls is narrowing, ahead of Sunday’s first round of elections. Expectations are that Macron will face the far-right politician Marine Le Pen in two weeks’ time. Philippe Gudin, chief European economist at Barclays, say Macron’s pledge to increase the retirement age to 65 is one factor in his recent unpopularity, as well as the news about the nearly €900 million spent on consultancy firms by the French government. The top two finishers will hold a debate on April 21.

The U.S. economics calendar is thin after a busy week of Fedspeak, as attention already is turning to next week’s inflation report. Expectations are building for the European Central Bank to lift interest rates, with two banks forecasting a first increase in September.

The latest deadly attack from Russia was on rail stations in eastern Ukraine, where officials said at least 30 civilians died.

Tesla TSLA, +1.10% CEO Elon Musk said there would be 2023 deliveries of the Cybertruck pickup and Tesla Semi at a nighttime event at the Texas gigafactory.

The euro EURUSD, -0.02% was trading under $1.09 ahead of Sunday’s first round of French elections.

Here were the most active stock-market tickers as of 6 a.m. Eastern.

TV’s Dr. Oz — Mehmet Oz, running for the U.S. Senate in Pennsylvania — is worth more than $100 million, campaign disclosures show.

Nissan 7201, -0.04% and NASA are working on a new type of battery, that will avoid the use of rare metals currently needed for lithium-ion batteries.

A shock result in an experiment could spark a physics revolution.