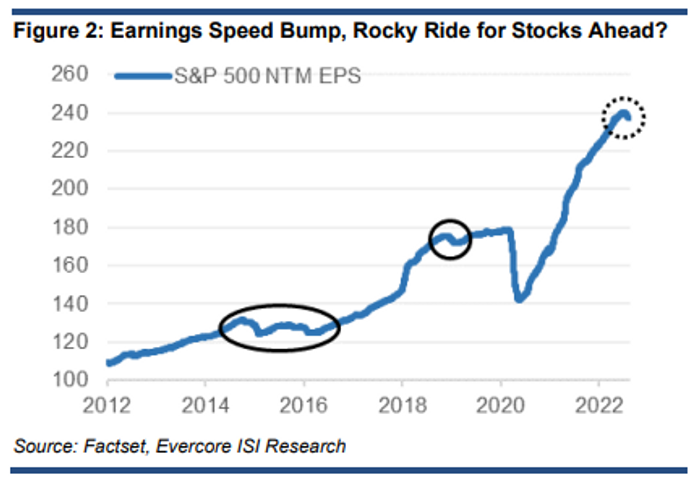 A technical indicator suggests a bottom is in but fundamental forecasts sow concern Read More...

The stock market has all but stalled this week. The S&P 500’s 200-day moving average has seemingly morphed from magnet to resistor. It’s the summer: NYSE composite volume was the lowest of the year on Thursday, according to Dow Jones data.

The rally, we are told, has been powered by hopes that peak U.S. inflation can help the Federal Reserve be more gentle in its monetary spanking. It has also been propelled by a generally well-received second quarter company earnings season. Oh, and falling oil prices too.

This week’s consolidation thus feels like bulls and bears have battled to an equilibrium. So let’s look quickly at an example of each; the first fundamentals-focused, the second of a more technical bent.

Ultimately, it is corporate earnings, and the multiple applied to them, that should determine the trajectory of stocks. By the middle of the week, companies representing 95% of the S&P 500’s market capitalization had reported, notes Julian Emanuel, strategist at Evercore ISI. Both earnings and sales growth came in ahead of forecsat.

Doubtless that helped underpin the summer stock surge as “top and bottom line results cleared a low sentiment bar into the quarter”.

Unfortunately, there may be trouble ahead. Emanuel reckons waning global economic growth means next 12-month earnings per share estimates have peaked. They forecast an S&P 500 EPS of $232, compared to current consensus of $244.

“An earnings ‘speed bump’ sets the stage for renewed market volatility, as observed even in non-recession years like 2015 when China weakness was the predominant global headwind, and notably heading into typical [negative] fall seasonality,” warns Emanuel.

Fundstrat’s Tom Lee, meanwhile, is typically bullish. Among a number of positive factors he uses to counter bearish fretting in his latest note is this rebuttal of the view that the market may be vulnerable because it never experienced “capitulation.”

The chart below shows the percentage of S&P 500 stocks that were more than 20% off their 52-week high at various times since 1995, in other words stocks in their own bear market. Lee notes that the figure surged to 73% on June 17th this year.

“This was only exceeded three times in the past 30 years. Each of the three prior instances was the market bottom. We think this is the fourth instance.” he writes.

“And stocks have the best forward returns when this figure exceeds 54% as shown below: in 3M, 6M and 12M the best decile for returns is when this figure is oversold more than 54% hence, buy the dip regime is in force,” Lee concludes.

About $2 trillion worth of options are due to expire on Friday, including $975 billion of S&P 500-linked contracts and $430 billion linked to individual stocks, according to Bloomberg. Thin summer trading may make this hard for Wall Street to digest.

Shares in Bed Bath & Beyond BBBY, -19.63% are down another 40% or so in pre-market action after it was confirmed late on Thursday that investor Ryan Cohen had dumped his whole stake in the struggling retailer.

Foot Locker FL, -1.45% stock jumped 19% after the sports retailer said Mary Dillon would replace Richard Johnson as CEO at the start of September, while Deere shares DE, +0.90% are down 5.8% after the tractor-maker delivered an earnings miss.

Peak inflation? Not at the factory gate in Germany. Data released on Friday showed producer prices in the world’s fourth biggest economy surged to a record 37.2% over the year to July, compared to 32.7% in June, as surging energy costs took their toll.

Awks! Indonesia says Xi and Putin will attend the G20 summit in Bali in November.

The Fed is not getting dovish. Deal with it.
Mark Wahlberg’s gym chain feels the burn.
Odessa is defiant.

The market appears to be enduring another bout of meme stock mania. Stories about 20 year-olds swiftly making $110 million on corporate strugglers like Bed Bath & Beyond BBBY, -19.63% are so hot right now. So, as a public service announcement, and with emphasis that the following should certainly NOT be taken as investment advice, here is a chart published this week from S&P Global Market Intelligence showing the most shorted companies in the U.S.