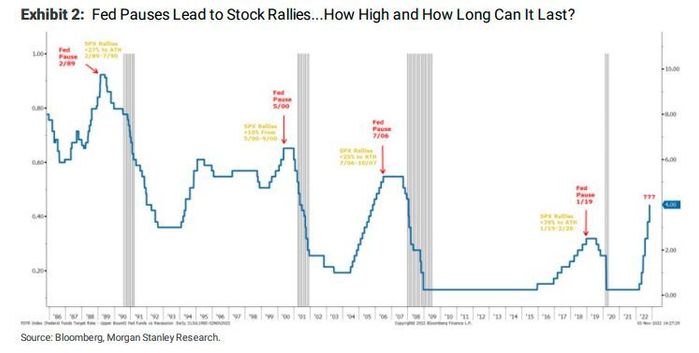 Our call of the day comes from Morgan Stanley where a team led by top U.S. strategist Mike Wilson sees the S&P 500 finishing next year almost on par with where it is now, at 3,900. Read More...

According to Fed Reserve Gov. Christopher Waller and several strategists, last week’s softer-than-expected October CPI that sent the S&P 500 to its best level in five months was overdone.

His words may be getting through as stock futures point to a softer start as the last full week before Thanksgiving kicks off. We’ll also get retail sales data this week.

And it’s that time of the year when Wall Street starts rolling out its 2023 market forecasts, an unenviable task for sure. Our call of the day comes from Morgan Stanley where a team led by top U.S. strategist Mike Wilson sees the S&P 500 SPX, +0.92% finishing next year almost on par with where it is now, at 3,900.

While that might look a little uneventful, the in-between period will be anything but, once Wall Street gets a wakeup call over earnings hopes that are still far too optimistic, the bank says.

“We remain highly convicted that 2023 bottom up consensus earnings are
materially too high,” said Wilson and the team, who revised their 2023 earnings per share forecast down another 8% to $195, which is 16% below consensus and 11% lower annually.

“After what’s left of this current tactical rally, we see the S&P 500 discounting the ’23 earnings risk sometime in Q123 via a ~3,000-3,300 price trough. We think this occurs in advance of the eventual trough in EPS, which is typical for earnings recessions,” said Wilson.

“Equities should begin to process that growth reacceleration well in advance, and rebound sharply to finish the year at 3,900 in our base case,” he said.

As for portfolio moves, Wilson said they remain defensive until those estimates “reflect the bust.” They upgraded staples to overweight and cut real estate to equalweight, leaving overweights also in healthcare, utilities, and defensively
oriented energy stocks. Consumer discretionary and tech hardware are unchanged as underweights.

The eventual silver lining is that a turbulent 2023 may give way to a better 2024, where Wilson and co. see a strong rebound as positive operating leverage growth —- revenue growing faster than expenses — “i.e., the next boom.”

“After a 12-month period when being stubbornly bearish paid off handsomely, we think we will now enter the final stages of the bear market where two-way risk must be respected,” he said.

He sees a “window of opportunity when long-term interest rates typically fall prior to the magnitude of the slowdown being reflected in earnings estimates and the economy,” defining it as a late cycle period between the Fed’s last hike and recession.

But remember that they are talking pause here only. “So, while we think there is a window for stocks to run into year-end as the markets dream of a pause,a Fed that is cutting is probably a bad sign that the recession has arrived (negative payrolls),” said Wilson. His chart shows that stocks do not react well to that:

Retail sales, the state of manufacturing in New York and some data on the housing market are in the data spotlight this week. The New York Fed’s 1- and 5-year inflation expectations are due for Monday.

“Fix your companies. Or Congress will,” Sen. Ed Markey fires back at Tesla TSLA, +2.75% chief Elon Musk over Twitter owner’s insult. Musk, meanwhile, told a G20 forum that he has “too much work” on his plate.

On the midterm front, Nevada and Arizona wins mean Democrats will hang onto the Senate, with Republicans fewer than 10 wins away from House control.

Former FTX chief executive Sam Bankman-Fried has been sending some puzzling tweets as investors continue to watch for more fallout from his bankrupt crypto exchange. Bitcoin BTCUSD, +1.86% is slightly higher at $16,775.

And: You need to understand what’s going on at FTX, even if you don’t have crypto

U.S. President Joe Biden is holding his first in-person meeting with Chinese President Xi Jinping Monday on the sidelines of the G20. And shares of Chinese property stocks soared Monday after Beijing signed off on aid measures for the embattled sector.

Concerns are growing about the health impact of puberty blockers.

Older workers need to stop complaining about your younger colleagues.

Tesla finds a loophole in states where dealerships are forbidden: Tribal lands.

Does the stock market rally have further to go? Watch the 200-daily moving average on the S&P 500, say some.

“That provided very tough resistance in March and August. Therefore, if it can break meaningfully above that line, it will signal that the Q4 rally could/should last through the end of the year,” said Matt Maley, Miller + Tabak.’s chief market strategist.

Diver got a rare octopus hug.