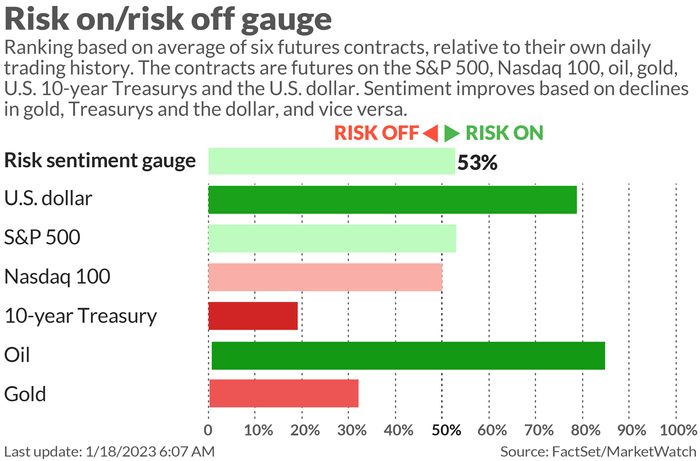 The JPMorgan team that was bullish on equities last year isn't in the mood to chase the rally. Read More...

The young new year has been all about reversion to the mean. Take the ARK Innovation ETF ARKK, +2.92% — Cathie Wood’s flagship fund of mostly unprofitable tech companies has stormed 19% higher in 2023, after last year’s 67% nose dive. The broader S&P 500 has gained 4% this year.

JPMorgan strategists led by Marko Kolanovic aren’t buying it. “We believe that the current equity market rally will start fading as we move through [the first quarter]. The positive catalysts (peak in bond yields, in inflation and in USD, China reopening, and more benign European gas prices), which helped drive a rebound are now in the open,” the team says in a new note.

What could mess things up? “Potential curveballs could come from the Fed, politics, disinflation phase not progressing smoothly, weaker earnings, weaker capex and renewed rollover in activity momentum,” they say. On the Fed in particular, the strength of the labor market suggests the central bank may keep tightening rates even after March.

Kolanovic was a bull on the stock market for much of 2022, with an overweight equities call for nine months. But JPMorgan maintains its model portfolio actually outperformed the benchmark by 3.4 percentage points, owing to calls to underweight government bonds and overweight commodities. Its long dollar position and underweight on credit also helped.

“Looking back, we believe the lessons from 2022 are 1) to take more risk on cross asset rather than within asset class themes in a fast-evolving macro environment, and 2) to be more tactical and to not hesitate to even reverse recommendations if macro trends justify such change,” says the team.

U.S. stock futures ES00, +0.29% NQ00, +0.34% edged higher. The dollar USDJPY, +0.75% soared against the Japanese yen, and the Nikkei 225 NIK, +2.50% rallied, after the Bank of Japan opted not to make any changes to its monetary policy, even given the difficulties it’s been facing with its yield-curve control program.

The U.S. economics calendar includes retail sales and producer price data, both at 8:30 a.m.. Eastern, followed by industrial production. Shortly after the open, the NAHB housing market index and business inventories data will be released, and at 2 p.m., the Fed’s Beige Book will be released.

U.S. Treasury Secretary Janet Yellen met with China Vice Premier Liu He in Zurich. “During the candid, substantive, and constructive conversation, they exchanged views on macroeconomic and financial developments,” the U.S. Treasury said. The two said they planned to meet next in their home countries.

Here’s the latest from Davos, including the downbeat message from the United Nations chief.

Alcoa AA, +0.46% after the close is the highlight of the day’s scheduled earnings releases. PNC Financial PNC, -1.31% declined after missing earnings estimates.

Moderna MRNA, -0.68% shares climbed after a positive trial for an RSV virus vaccine.

Coinbase COIN, +8.32% says it is closing its Japanese operations. FTX for the first time disclosed there was a shortfall of funds at its U.S. exchange.

Microsoft MSFT, +0.47% may cut about 5% of its workforce, according to a report.

New York magazine takes a look at Elon Musk’s Twitter — and one of the reporters subsequently tweeted that the company’s revenue dropped 40% year-over-year.

So for, only rough plans on Washington and Wall Street to deal with a potential debt ceiling violation.

A little-known Arizona nonprofit access gives law enforcement without court oversight to a database of more than 150 million money transfers between people in the U.S. and in more than 20 countries.

There were the most active stock-market tickers on MarketWatch as of 6 a.m. Eastern.

It’s very early days for fourth-quarter earnings, but FactSet’s John Butters looked at what executives have been discussing on conference calls so far. Right now, the biggest drawback to earnings have been been currency moves and labor costs. The impact from COVID, interest rates, transport costs and oil prices also have been among the negative factors.

A plane with a wingspan longer than a football field has completed a record-breaking flight.