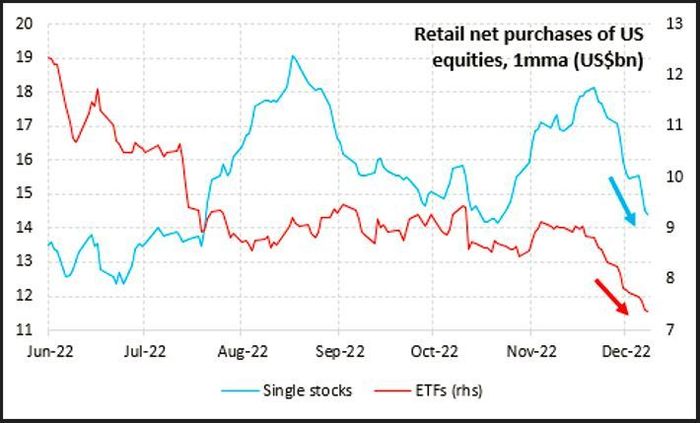 Retail investors are skittish about this market, and understandably. Our call of the day says that may only help lure back influential investors in the new year. Read More...

If any week is going to move the bar for investors, it might be this one.

Ahead of a Fed decision, which holds a risk of more hawkish chatter from Fed Chairman Jerome Powell, we’ll get a closely watched CPI report in a hefty week for data, as the clock ticks down on 2022.

What normally happens around this time of year is selling of losing stocks by investors to help offset capital gains elsewhere, points out Eric Liu, co-founder and head of research at Vanda Research. The proceeds are then reinvested, with exchange-traded funds being a vehicle of choice for investors to keep up their exposure.

But not so much this year, Liu notes:

It’s all about “retail capitulation,” which is actually a positive development for markets, says Liu. It puts retail positioning for U.S. stocks at a low for 2022 — about as attractive as it’s been the whole year.

But what Liu sees as crucial to the next leg higher for stocks is the so-called fast-money community — hedge funds and systematic or quant investors — who have been sitting on the sidelines for much of the past seven months:

What could change this? A market-supportive Fed meeting and CPI data that doesn’t raise the hackles for one, said Liu. Even that may not be enough to lure those managers back in just seven trading days before the Christmas break.

But he says the first quarter of 2023 could be a different ballgame, based on history that shows big bullish build-ups often take place in the first three months of the year. Morgan Stanley’s Mike Wilson also sees a “terrific buying opportunity” in that period, though a mostly sideways S&P 500 by end next year.

Markets are also nearing some major momentum signals that would be triggered even if markets stabilized around current levels, said Liu.

Liu notes that of the 10 CPI prints seen so far this year, nine have turned into tail events, low-probably events that took investors and markets by surprise. That means expectations for Tuesday’s core CPI to land between 0.3% and 0.4% may be a tall order.

Even so, he says the “balance of probable outcomes” for interest rates, positioning and macro still “continue to favor a bullish view on equities (and risk more broadly) here…time is on bulls’ side as we creep into 2023.”

Read:  These two small-cap stocks could make you the most bank in 2023

Apart from Wednesday’s Fed decision, New York Fed’s inflation expectations are due later, with Tuesday’s CPI data a major focus, followed by retail sales on Thursday and manufacturing updates throughout the week.

Microsoft MSFT, -0.80% will take a 4% stake in the London Stock Exchange  LSEG, +2.65%, which will spend billion on the tech giant’s cloud services and data.

Meanwhile, three months after agreeing on a deal to make electric vans with Mercedes-Benz MBG, -1.11% Rivian RIVN, -4.51% is bailing, while Zeekr, an upmarket China EV brand from Geely 175, -4.15% is reportedly eyeing a $1 billion U.S. IPO.

China will stop using a travel tracing app as it keeps backing away from zero COVID rules, as the country sets up more ICUs and tries to strengthen hospitals amid surging cases.

One company could determine whether U.S. corporate profits rise to a record next year

The safety of Ukraine’s Zaporizhzhia nuclear plant — dubbed the most dangerous place in the world — hangs in the balance.

U.S. scientists have just made a breakthrough in nuclear fusion technology

Dogged by the collapse of exchange FTX, investors withdrew a record 91,363 bitcoin BTCUSD, -1.04%, worth around $1.5 billion, in November from crypto exchanges including Binance, Kraken and Coinbase, according to CryptoCompare data compiled by the FT.

These were the top-searched tickers on MarketWatch as of 6 a.m. :

A $100K quinceañera celebration…for a dog.