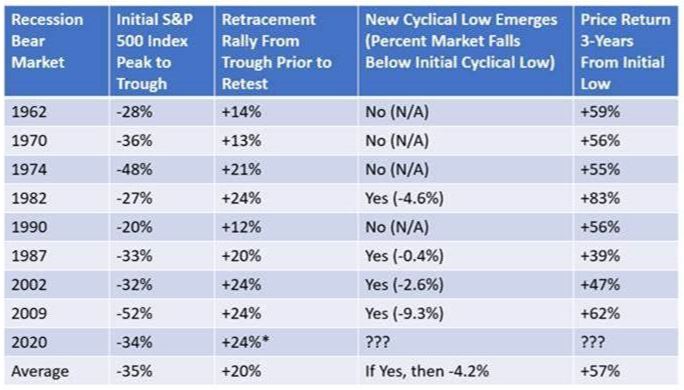 Our call of the day comes from a top financial planner in the U.S., who is keeping her cool, hoping for the best and offering this advice for those who still have some ways to go before retiring. Read More...

For Thursday, we’ve got earnings news ahead from Apple, Amazon and Gilead, the latter of which has been fueling optimism with its own COVID-19 treatment.

After that it is goodbye April, which is set to deliver the best gains for the S&P 500 SPX, -0.73% since 1974. Equities have been looking past the bad news — more than 3 million coronavirus infections worldwide and tanking global economies for starters — to hopes for a treatment and the reopening of economies.

There are lots of gloomsters out there, but a few optimists as well, like Ameriprise private wealth adviser Kimberlee Orth, who was ranked No. 2 in the U.S. among her female peers in 2019 by Barrons. Our call of the day is packed with her advice for those 10 to 20 years away from retirement, and who might be feeling uneasy about pandemic damage to their investments.

“If you were already in the stock market on Feb. 1 or March 1 or April 1, and you watched the market go down and those resources are allocated to a long-term goal and your risk tolerance is still suitable, there’s no need to change that because the market is eventually going to go back up,” says Orth.

Orth says she likes stocks right now and thinks prices look good relative to where they were three months ago. “Sectors we like are technology, consumer cyclicals, pharma, and sectors where it may be a little early are airlines, cruises, hotels and restaurants. All of this is going to be wrapped around changing consumer behavior,” she says.

Among other strategies she is discussing with clients are dollar-cost averaging, the practice of investing a set amount into stocks at regular intervals, thereby spreading out risk. “This could be a real opportunity with the volatility in the market,” she says.

Orth says Ameriprise started preparing clients for a downturn last fall, selling out of positions and making sure they had enough cash on hand for any near-term purchases. For example if you need a car on May 30, start getting the cash ready, she says.

“We’re going to get through this eventually. The market will go back up at some point, when the economy and the world start to recover. It’ll change, but it will get better,” Orth says.

Europe stocks SXXP, -1.43% edged lower, with the European Central Bank leaving key interest rates unchanged, and President Christine Lagarde warning that the eurozone economy could fall by as much as 12% in 2020, with French and GDP numbers out earlier worse than expected. Asia markets tracked Wall Street gains.

Will stocks retest those March lows? Maybe not, says our chart of the day from Invesco’s global market strategist Brian Levitt. Out of eight recession bear markets, Invesco found not only did that not happen on four occasions, but stocks were on average 57% higher three years later.

The number of Americans filing for jobless claims amid the pandemic rose another 3.8 million to a a cumulative 30 million. Personal income and consumer spending also tumbled. Still to come is the Chicago purchasing managers index.

Opinion:Musk vs. Zuck: A tale of two CEOs acting much differently during a pandemic

The Trump administration has reportedly set up “Operation Warp Speed” to fast-track a coronavirus vaccine and President Donald Trump has lashed out against China over the pandemic. Los Angeles will offer free virus tests, but forget about California’s beaches.

Some die-hard New Yorkers now say they may never go back.

Cronos Group (CRON) Stock Moves -0.99%: What You Should Know

The Moneyist: My ex-husband moved in. He pays $150 for cable, his only expense, and gives me the silent treatment if I ask him to pay for dinner