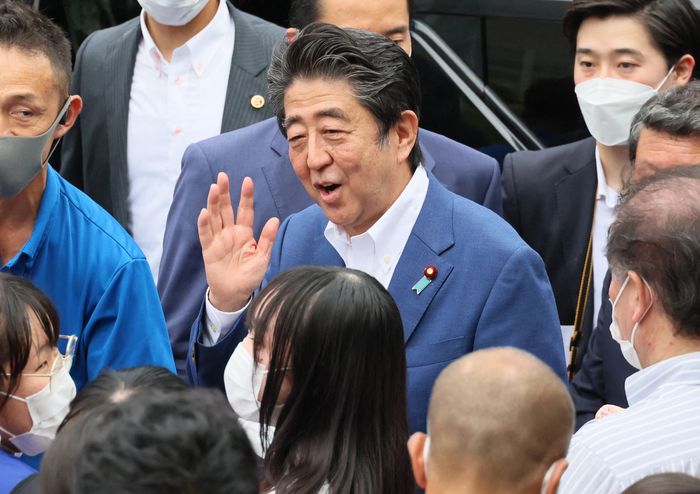 A market that is constantly shifting around isn't for everyone, says our call of the day, who offers up an idea for those with longer-term goals. Read More...

On jobs day, investors find themselves looking to the Far East, where the shocking assassination of Japan’s former prime minister, Shinzo “Abenomics” Abe, has rocked the country.

Japanese markets also fell on the news of Abe’s shooting. More below.

For U.S. investors, data are expected to show the weakest jobs growth in 18-months, and we’ll see where that takes stocks, which have been gaining this week, notably tech, as some look toward an end to Federal Reserve hikes.

What to do in this shifting market? Some fresh advice comes from the founder and CEO of Prometheus Alternative Investments, Michael Wang, a former senior analyst at S.A.C. Capital Advisors, a now defunct hedge fun run by Mets owner and investor Steven Cohen.

Answering questions via email late Thursday for MarketWatch, Wang had insight into how investors should proceed as the discussion lurches from inflation to recession talk. He said markets are pricing in a “possible recession.”

It isn’t a market for everyone, he admits. “If you’re a short-term investor, it may be best to stay away from all this volatility. However, if your time frame is over a year, good companies with strong fundamentals are out there making this is an attractive market,” said Wang in our call of the day.

Some may already be taking that advice, as the Nasdaq Composite COMP, +2.28% is up 4% for the week thus far, beating other indexes, though still down 25% year to date. Tech has been hit hard this year by investors taking another look at valuations in light of rate increases, noted Wang.

“As we wade through this uncertainty, I do think we’ll see more software companies get acquired, like Zendesk just recently. There’s a lot of dry powder in PE [private equity] right now, so this is the time when investors are looking for alternatives and reassessing their strategies,” said Wang.

“If the public markets don’t value these companies properly, then we’ll see a rush of M&A. Strong companies with recurring, subscription based revenue models and strong fundamentals have significantly derated, giving investors with a long-term time horizon an opportunity,” he added.

As for where markets are headed, he thinks a lot of recession concerns are priced in. He notes big institutional investors are getting more defensive and running high cash levels, hedge funds with the “lowest net exposures since the GFC,” and individual investors increasingly aware of macro shifts.

” I tell people not to conflate the current state of the economy with where the market is currently. The market does not reflect the economy today, but rather the economy three to nine months from now. I expect the market to recover well before the economy has,” said Wang.

The last word from Wang is a warning over U.S. politics. “With investors focused on macro data, central bank statements, and geopolitics, the midterm elections this year could impact both economic policy and investor sentiment until the next presidential race in 2024,” he said.

Read: Why the stock market and bonds may be at the mercy of oil prices the next 6 months

Economists predict 250,000 new jobs were created in June, with average hourly earnings and the employment rate also due ahead of the market open. A revision to wholesale inventories and consumer credit are expected later.

Amid reports Tesla TSLA, +5.53% CEO Elon Musk’s $44 billion deal for Twitter TWTR, +1.52% may be troubled, the social-media group is axing just under 100 people, part of a reconstruction plan, a source tells MarketWatch. Shares are falling.

GameStop GME, +15.06% fell late Thursday, after the meme-stock favorite revealed that its chief financial officer has been fired amid reports of job cuts.

Upstart UPST, +1.96% is off 50%, after the lending company said it won’t hit a disappointing forecast.

With the war in Ukraine in its fifth month and global leaders struggling to stay united, Russian President Vladimir Putin warned Kyiv to accept Moscow’s terms or brace for the worst.

President Joe Biden is expected to sign an executive order on Friday to protect abortion access, after the Supreme Court ended a constitutional right to the procedure two weeks ago.

“This is a profanity against democracy.” That was Nobuo Kishi, Japanese defense minister and brother of 67-year old Shinzo Abe, who was shot earlier Friday. A suspected gunman is in custody. Among the tributes, New Zealand Prime Minister Jacinda Ardern recalled how Abe once asked her about the loss of a family pet.

From the Market Ear blog, a few words about copper HG00, -1.48% — down over 2% for Friday and off 3% this week — it is setting up as one of the worst metal performers this year.

“Yesterday we reminded our readers about just how oversold copper was. We wrote: ‘Copper is down so much you almost get tempted to buy some for a bounce…even if you are bearish this entire space. Do we see a short-term hammer candle here? We got the hammer candle yesterday and the huge up candle today. Powerful moves…’

In a downbeat market, some nonfungible token companies are looking for a “Chief Vibes Officer” or “Director of Vibes.”