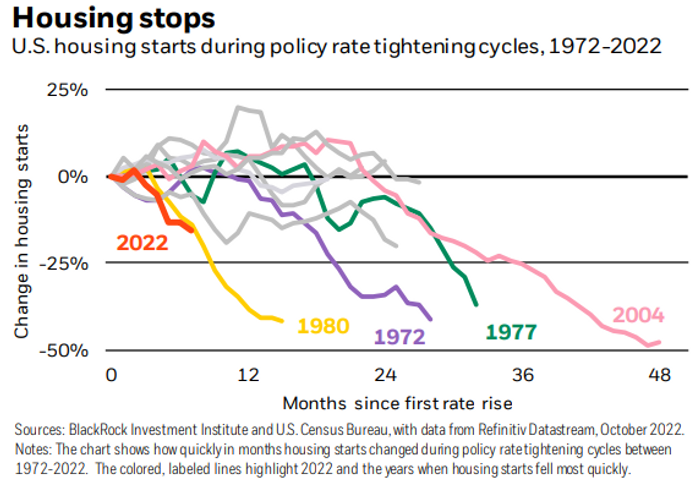 Watch out as politics increasingly focuses on the Fed's rate hikes rather than inflation. Read More...

So much for the safety of the tech behemoths, those supposedly friendly giants who may be relatively richly valued but you could still count on to buttress your portfolio.

Forlorn equity investors have seen TINA turn to TIN. From There Is No Alternative to stocks, we now seemingly have There Is Nobody you can rely on.

But at least with the U.S. midterm elections fast approaching on Nov. 8, surely we have the politicians to help us. Well, not this time says the team of analysts at BlackRock led by Wei Li, global chief investment strategist.

Stocks tend to do well after the U.S. midterms, they note, because gridlock is a common result, and this prevents policy changes that could rattle the market.

However: “We see a bigger problem for stocks than any potential positives from the midterm election outcome: a looming recession. We have argued how central banks rushing to hike policy rates to get inflation back to target would need to crush interest rate-sensitive parts of the economy first,” says BlackRock’s team.

They point to clear signs of damage already inflicted on housing, for example.

“As mortgage rates soar along with the Fed’s aggressive rate hikes, the number of
new housing starts is falling quickly. The slide in housing starts this year (see
orange line in the chart below) is already steeper than past mega Fed rate-hike
cycles such as in the 1970s and early 1980s – as well as the unwind of the mid2000s U.S. housing boom (other colored lines),” they write in a note published this week.

Any fiscal stimulus that may follow the midterms could be counterproductive for markets, BlackRock reckons, because it would operate at cross purposes to the Federal Reserve’s battle against inflation. It would come as debt levels are high and interest rates are rising, a combination that may revive the bond market vigilantes, just like it did recently in the U.K.

BlackRock says that following the midterms the political focus will shift to the economy, and in particular lawmakers will start to express that they see greater danger in the Fed’s tightening than they do in the impact of inflation.

“We see the politics of rates creeping into the politicization of everything with more voices beginning to decry the aggressive rise in interest rates that is causing recession. We see the Fed stopping its hikes amid the economic damage and pressure to ease up on tightening, but price pressures will persist. That’s why we think it will eventually have to live with some inflation,” says BlackRock.

Still, the Fed will only pause “only after the economic damage of rate rises is clear. All this outweighs any expected boost for stocks after the midterms, in our view…We’re underweight developed market equities,” BlackRock concludes.

Amazon stock AMZN, -4.06% is down about 13% in premarket action and in line to trade at its lowest level since April 2020 after the company forecast weak holiday sales following Thursday’s closing bell.

Apple shares AAPL, -3.05% are inching up 0.5% or so after its post-close results contained no shockers, though it did warn it was facing headwinds from a strong U.S. dollar DXY, +0.30%.

Big oil dominates the earnings calendar on Friday, with Chevron CVX, +0.46% and Exxon Mobil XOM, +0.38% presenting their figures. Both offerings were well received by traders and shares are up about 2%.

Elon Musk has finalized his $44 billion purchase of Twitter. According to reports he has swiftly fired CEO Parag Agrawal and will take over the role on an interim basis. Tesla shares TSLA, +0.20% are down 1% before the opening bell.

The euro EURUSD, -0.12% traded back below parity with the dollar after the European Central Bank on Thursday suggested the pace of future rate rises would likely slow. The buck also gained against the pound GBPUSD, -0.15% as traders waited for next Wednesday’s Federal Reserve decision on interest rates.

With that in mind there’s a big batch of data coming on Friday, which may color the Fed’s thinking. Arguably the most important is the bunch of personal consumption expenditure, or PCE, figures for September, due at 8:30 a.m. Eastern. At the same time the employment cost index for the third quarter will be published and the September real disposable income and real consumer spending reports.

Then at 10 a.m. traders get the University of Michigan consumer sentiment index and inflation expectations for October, alongside pending home sales for September.

Inside the secret prisoner swap that splintered the U.S. and China.

The cloud boom has hit a plateau, and it’s costing investors billions.

Wall Street analysts and investors may not be overtly declaring stagflation, probably because the condition -– high inflation during a recession – -is stock market kryptonite. But as the two charts below from Bank of America show, consumers certainly seem to be of a stagflationary mindset. Forty-five percent of respondents reckon a recession has already begun, while 75% thought that inflation would be elevated over the next 12 months.

“Over the last month, the BofA US Consumer Confidence Indicator retreated from a five-month high of 33.7% to a two-month low of 31.3% as of October 23. Consumers are concerned about the economy as inflation is yet to be tamed and recession fears grow,” wrote the data analytics team at BofA.

The real benefit of twitter – how bird song improves your mental health.

On the other hand….there is Derek the Menace, the dive bombing jackdaw.