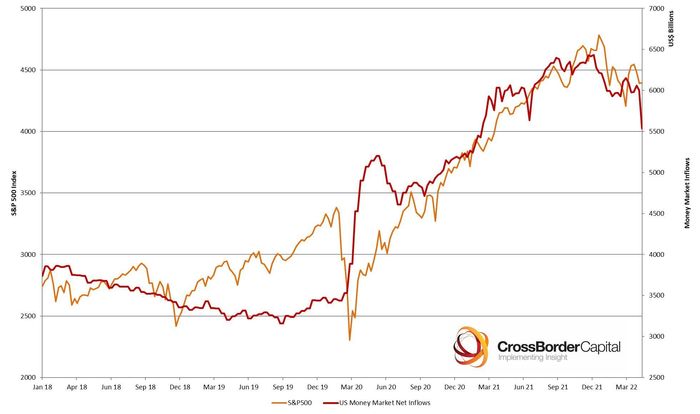 As the meat of earnings season begins, it’s worth noting what investors have learned so far. The short version is, apart from a few isolated companies (cough, Netflix, cough), not a whole lot: the projected rise in S&P 500 earnings per share this year stands at 8.9%, compared with 8.1% at end of March, according to S&P Global Market Intelligence.

But even as expectations toward earnings have improved, the market has struggled, with the S&P 500 SPX, -2.77% down 6% this month so far. So what’s going on?

Well, reserves at the Fed fell by $460 billion last week, which according to Citigroup was the biggest weekly drop ever. So let’s hear what that means from Michael Howell, dubbed the godfather of global liquidity, and the chief executive of CrossBorder Capital, a boutique he formed in 1996 after heading the research teams at Baring Securities and Salomon Brothers. Howell explained to Jack Farley of Blockworks Macro that, by global liquidity as opposed to market liquidity, he means the ability to change investment positions relatively easily. “If you put more liquidity into a financial system, what’s happening is you are decreasing systemic risks, because it’s much easier for any particular entity to get funding, and if funding is easy, people will move along the risk curve into higher risk instruments,” he said.

The central banks, through monetary operations, control a large part of liquidity. He also monitors the actions of commercial banks, shadow banks, big corporations such as Microsoft and Alphabet and cross-border investors. And in response to surging inflation, some 95% of central banks around the world are tightening. The Federal Reserve, in the minutes from the last Federal Open Market Committee meeting, outlined a plan to reduce its balance sheet by some $2 trillion.

Howell says a normal tightening cycle would lead the S&P 500 down by around 15%, if a recession is thrown on top that’s a 30% drop, and if there’s a banking crisis on top of that, there’s a 50% slide. “I don’t think we’re going to get the third, I think we’re getting more than the first, so I’m plumbing for the middle which is about a 30% correction from the peak to the low,” he said.

Since there’s already about 10% of the decline from the peak, Howell says there’s another 20% drop to come.

That declining liquidity has already been seen with the collapse in the Japanese yen USDJPY, -0.32%, soaring Treasury bond yields, and spiking commodity prices. The increased volatility makes it more difficult for people to borrow against that collateral as lenders will require more margin. Howell says his index of liquidity is on the verge of entering the “turbulence investment zone”

Howell also said that market leadership — utilities and brand names outperforming cyclicals and techs — and the yield curve are saying that investors want safety and that a recession is increasingly likely.

Twitter’s TWTR, +3.93% board has suddenly warmed to Elon Musk’s bid now that it has financing, The Wall Street Journal reported, citing people familiar with the matter. Bloomberg News said talks are in the final stretch.

China’s capital of Beijing appears to be moving toward the strict lockdowns seen in the financial hub of Shanghai in response to a new COVID-19 outbreak.

The European Parliament and European Union member states over the weekend agreed on a proposed Digital Services Act, that will force tech companies to take more responsibility for the content on their platforms.

The People’s Bank of China said it’s cutting foreign exchange reserve requirements by a full point, after a recent surge in the dollar vs. the yuan USDCNY, +0.76%.

There’s now a bar that only shows women’s sports.