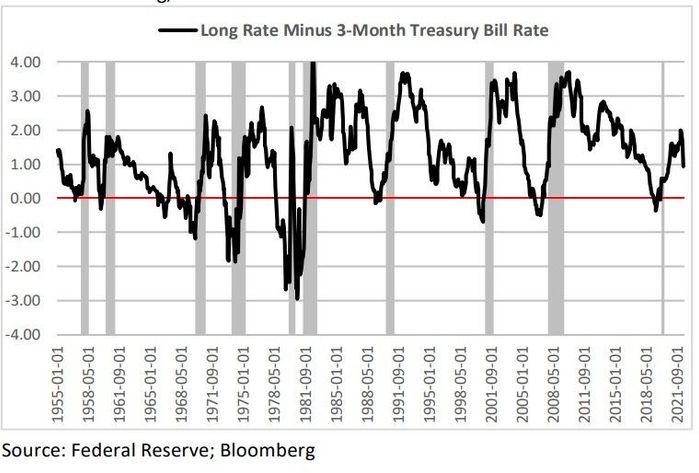 Michael Darda, chief economist and market strategist at MKM Partners, was no fan of the stock market when it was registering record highs. “Blinded by liquidity and false expectations of the proverbial Fed put, we fear that some investors are chasing momentum into the graveyard,” he warned in early December, when the Nasdaq Composite COMP, +0.35% was some 28% higher.

So it’s worth noting that Darda is far more optimistic now. He points out market-based indicators of inflation risk have rolled over hard. Industrial metals are down more than 25% from their highs, energy is on the edge of a bear market, and the dollar DXY, -0.18% has risen by double-digits year-to-date. The gap between the 10-year Treasury yield and the 3-month Treasury bill rate has compressed to just under 90 basis points. “This is a sign that a previously behind-the-curve Fed is catching up. Yet, the focus seems to have suddenly shifted from open-ended inflationary overshooting to hard landing/recession,” he says.

A monetarist model is also suggesting tighter monetary conditions, he says, noting the growth in broad money has essentially flat lined, and commercial bank deposits are meandering in a sideways trajectory.

The stock market, he adds, has essentially priced in more than two-thirds of a recessionary/bear market outcome already, with the S&P 500 down as much as 24% from its highs, and the forward multiple down nearly five points over a six-month span. When the multiple has contracted by four points or more over a six-month span, the S&P 500 climbed by double digits in the next 12 to 24 months.

”Our point here is that markets have already priced in a significant risk of recession/earnings declines and there may not be a recession this year. Even if there is a recession, markets move first and investors are highly unlikely to be able to time the bottom,” he says. So even though markets could fall further, a downturn is now the consensus call, so “why not be a bit of contrarian here.”

Weekly jobless claims are due for release. The scheduled ADP employment survey isn’t going to be released while the methodology is being updated.

Meme stock GameStop GME, -2.33% rallied 7% in premarket trade after it announced a 4-for-1 stock split.

Tesla TSLA, -0.57% CEO and Twitter TWTR, -0.44% suitor Elon Musk fathered twins with a top executive at Neurolink, one of his many companies, Business Insider reported, citing a court document.

U.K. Prime Minister Boris Johnson is resigning, finally bowing to the demands of scores of ministers who resigned over his handling of a sexual assault case.

Johnson’s resignation put an end to the mass exodus from his cabinet. The U.K. Institute for Government found that the number of ministerial resignations, outside of reshuffles, was the most since at least 1979.

Here were the most active stock-market tickers at 6 a.m. Eastern.

A mysterious granite monument in Georgia, target of conspiracy theorists, has been blown up.