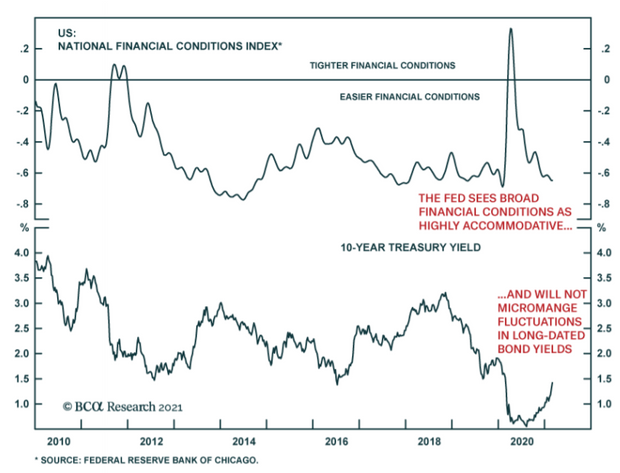 The head of the U.S. central bank isn’t alarmed by the rise in bond yields — so here's what analysts expect to happen now. Read More...

The idea that the Federal Reserve will spring into action if the stock market suffers too much pain was initially called the Greenspan put, after then-chairman Alan Greenspan, and gets renamed with each successive leader of the U.S. central bank.

But how much pain is always the question, and so far, Federal Reserve Chair Jerome Powell isn’t howling. That is the clear conclusion that can be reached from Thursday’s interview with Powell, in which he repeatedly was asked by The Wall Street Journal’s Nick Timiraos about the rise in bond yields and offered no suggestion the central bank would take action against it. “You know, it was something that was notable and caught my attention,” Powell said, using similar language to that employed by Gov. Lael Brainard on Tuesday. “But again, it’s a broad range of financial conditions that we’re looking at, and that’s really the key. It’s many things.”

Powell is still dovish by any conventional metric. The Fed won’t reduce the rate of bond purchases anytime soon, he said. “I think the guidance for tapering asset purchases has an element of judgment in it. But I’ve also said that we will, well in advance of any decision to consider tapering asset purchases, we’ll communicate about our sense of progress toward substantial further progress toward our goals. So we’re not looking to surprise people with that,” he said. As for hiking interest rates, Powell said it would take “some time” to get there and emphasized what’s been weak job-creation data rather than strong spending data.

Strategists at ING say upside risks to U.S. yields will dominate into the next Fed meeting, which ends Mar. 17, “leaving both risk assets and short dollar positions vulnerable.” Next week’s 10- and 30-year Treasury auctions are “exactly the tenors into which U.S. overheating risks can be priced.”

Strategists at BCA Research led by Mathieu Savary say the takeaway is that the Fed won’t try to micromanage fluctuations in long-dated bond yields. For now, expect more of the same — technology stocks COMP, -2.11% struggling while value-focused sectors, such as financials BKX, -1.09%, are advancing. “Within the equity space, short-duration stocks are likely to outperform, implying that an overweight position in value versus growth is appropriate, and in cyclical sectors over defensive ones,” they said.

In a note written ahead of the Powell talk, Goldman Sachs strategists hiked their U.S. 10-year Treasury yield forecast for the end of the year to 1.90%, citing the “sizable fiscal stimulus and an accelerated mass vaccination schedule will turbocharge growth and inflation in the coming months.”

The nonfarm payrolls report due at 8:30 a.m. Eastern will provide another marker of just how much progress the economy is making toward the Fed’s goals. Economists are forecasting 210,000 new nonfarm jobs were added in February, with the unemployment rate staying at 6.3%.

Clothing retailer Gap GPS, -1.44% forecast sales growth in the mid- to high-teens this year, which was slightly ahead of analyst estimates.

In the long run, stocks outperform bonds, which outperform bills. That is the conclusion from looking at inflation-adjusted returns in 21 countries and five regions. “This overall pattern, of equities outperforming bonds and bonds beating bills, is what we would expect over the long haul, since equities are riskier than bonds, while bonds are riskier than cash,” said financial historians Elroy Dimson, Paul Marsh and Mike Staunton in the Credit Suisse global investment returns yearbook. That is the good news.

The bad news is, they plotted returns against interest rates across 2,445 country years, and the current low rates mean future returns aren’t likely to be great. “There is a clear relationship between the current real interest rate and subsequent real returns for both equities and bonds,” they said.

A bill making its way through the Kentucky General Assembly would strip the power of the governor to appoint a replacement to a senator who doesn’t serve out a full term — leading to speculation that Senate Minority Leader Mitch McConnell might exit early.

A startup is building tiny injectable robots to attack tumors.

Is Salesforce a Buy After the Tech Stock Sell-Off?
: U.S. suspends tariffs on these U.K. goods and eases Airbus–Boeing trade tensions
Comment

Target will take a bite out of its grocery competition with Good & Gather, experts say

Outside the Box: ‘Wildly out of context’ — Navarro on his own words, and the markets in relation to the economy