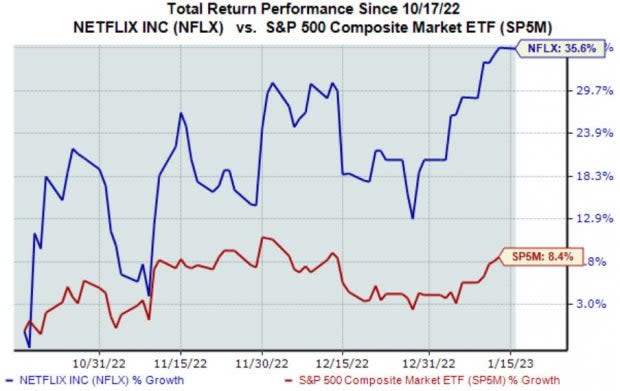 After providing investors with a multitude of gains over the last several years, the music was shut off for Netflix NFLX shares in 2022, sending them tumbling for the greater part of the year.

A slowdown in subscriber growth was the primary driving force behind the sell-off, with a hawkish Federal Reserve also being a thorn in the company’s side.

However, in a quick turn of events, Netflix shares have crushed the S&P 500’s performance over the last three months, as shown in the chart below.

In addition, the company is slated to reveal quarterly results this Thursday, January 19th.

It raises a valid question: how does the company stack up heading into the release? Let’s take a closer look.

The most critical metric investors will be tracking is the number of subscriber adds throughout the quarter.

After all, a declining user base is certainly not what investors want to see.

For the quarter, the Zacks Consensus Estimate for net subscriber adds stands at 4.47 million, a nice increase from the prior quarter’s 2.4 million figure. Still, the value reflects a more than 40% decrease from year-ago subscriber adds of 8.3 million in Q4 2021.

However, it’s worth mentioning that Netflix has positively surprised on this metric in back-to-back quarters.

Analysts have had mixed reactions for the quarter to be reported, with two downward and upward earnings estimate revisions hitting the tape. The Zacks Consensus EPS Estimate of $0.45 suggests a Y/Y decline of roughly 66% in earnings.

The company’s top-line is in better shape; the Zacks Consensus Sales Estimate of $7.8 billion suggests a marginal 1.7% Y/Y uptick in revenue.

Top line results have primarily been mixed; NFLX has fallen short of revenue estimates in three of its last six quarterly releases. Below is a chart illustrating the company’s revenue on a quarterly basis.

Following the rough stretch of price action over the last year, Netflix’s valuation multiples have pulled back extensively; NFLX shares currently trade at a 31.4X forward earnings multiple, a fraction of the 71.1X five-year median.

In addition, the company’s forward price-to-sales ratio has come down to 4.4X, well off the 7.6X five-year median.

After a rough showing throughout the majority of 2022, Netflix NFLX shares have rebounded over the last three months, up more than 30%.

In addition, the company’s valuation multiples have cratered, perhaps enticing those with a long-term horizon.

Of course, net subscriber adds will be the most closely watched aspect of the entire earnings release, a metric that the company has positively surprised on in back-to-back quarters.

Further, analysts have primarily been mixed in their earnings outlook, with estimates indicating a sizable Y/Y pullback in earnings and a slight uptick in revenue.

Currently, Netflix is a Zacks Rank #3 (Hold) with an Earnings ESP Score of 21%.