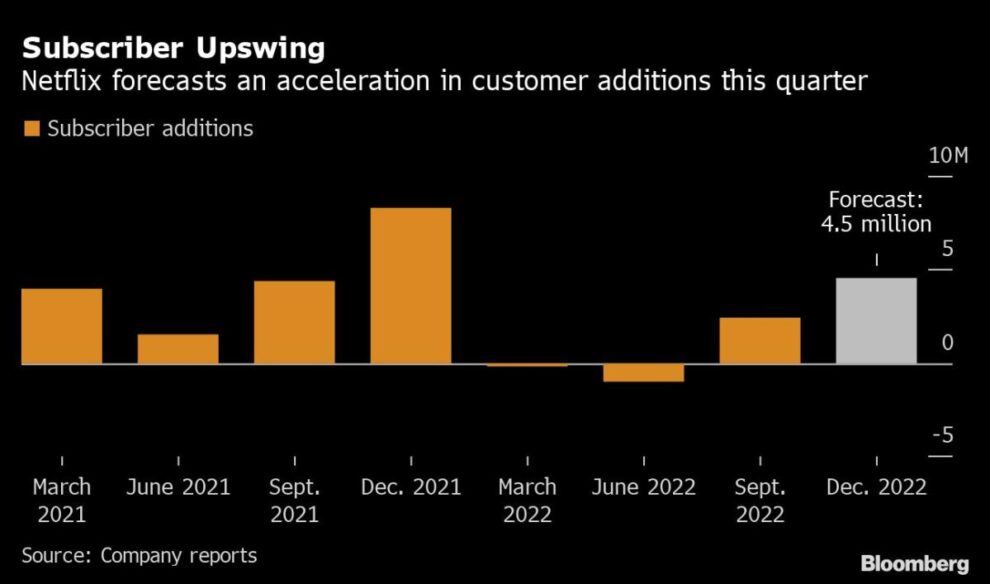 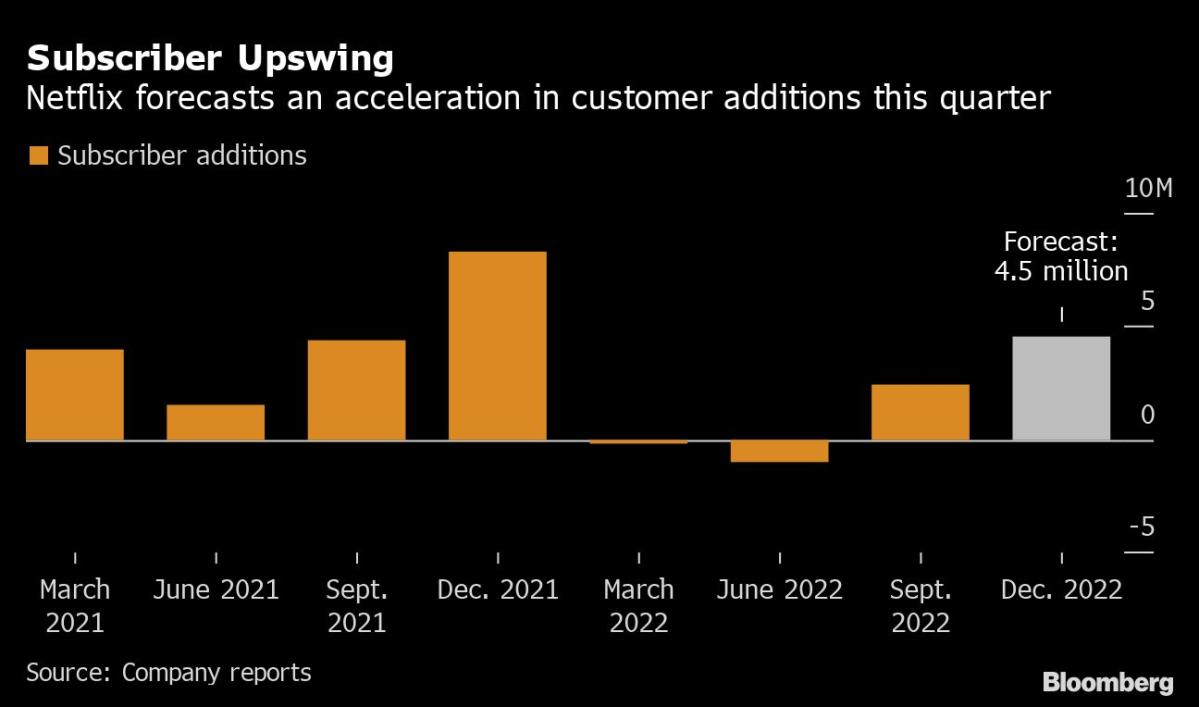 (Bloomberg) — Netflix Inc. is growing again, and Hollywood can breathe a sigh of relief.

The streaming leader added 2.41 million customers in the third quarter, exceeding internal forecasts as well as expectations on Wall Street. Netflix grew in all regions of the world and said in a shareholder letter on Tuesday that it expects to sign up another 4.5 million globally this period.

While Netflix isn’t growing as quickly it was a couple years ago, the world’s most popular TV network is back on a positive trajectory. More customers are signing up than earlier in the year, the company said Tuesday. That’s good news for investors in Netflix and its peers who suffered steep stock-market losses earlier in the year.

Shares of Netflix rose as much as 16% to $278.94 in extended trading after the results were out. The stock was down 60% this year through the close Tuesday in New York. Other streaming companies, such as Roku Inc. and Walt Disney Co., also rose.

A strong slate of fresh programs attracted millions of new viewers in the third quarter. The period started with new episodes of Stranger Things, one of the most popular TV series in the world. Netflix also released the Korean smash hit Extraordinary Attorney Woo, the movies The Gray Man and Purple Hearts, and the true crime drama Monster: The Jeffrey Dahmer Story, its second-most-popular English-language original series.

Revenue for the quarter grew 5.9% to $7.93 billion, beating analysts’ projections. Profit of $3.10 a share also topped estimates, and the number of paying customers increased to 223.1 million.

It won’t be all rosy going forward. Netflix is still on pace for the slowest growth in years. The company lost 1.2 million customers during the first half of the year — a decline that led investors and peers to reconsider their streaming investments. Its customer base has shrunk in the US this year.

The soaring dollar is taking a bite out of revenue and earnings. While Netflix said it can adjust content spending and pricing accordingly, its forecast for fourth-quarter sales and profit fell short of Wall Street estimates. The company estimates sales of $7.78 billion this quarter, below the $7.98 billion forecast by analysts. Earnings are expected to come in at 36 cents a share, a fraction of the $1.20 estimated on Wall Street.

“We’re still not growing a fast as we’d like,” Chief Financial Officer Spencer Neumann said in the same interview.

Nonetheless, Hastings and Ted Sarandos, the company’s co-chief executive officers, argue Netflix has plenty of room to grow. The service accounts for about 8% of TV viewing in the US and UK, two of its largest markets, and is adding market share every year, the company said in the letter. Netflix is also profitable, unlike the streaming services operated by most rivals.

Management plans to increase sales by introducing an advertising-supported version of the streaming service in November and charging for password sharing next year. Customers willing to watch Netflix with five minutes of advertising per hour can pay $7 a month, less than half of the cost of the most-popular plan.

A lower-priced tier could help Netflix reduce the number of people canceling service or appeal to new customers in markets where growth has slowed. As viewership of linear TV falls off a cliff, Netflix also argued it would capture billions of dollars in sales once earmarked for live TV channels.

While investors have long judged Netflix based on the number of customers it adds every quarter, the company is trying to get them to consider more traditional financial metrics like revenue and operating income. As a result, Netflix said it will no longer provide subscriber forecasts.