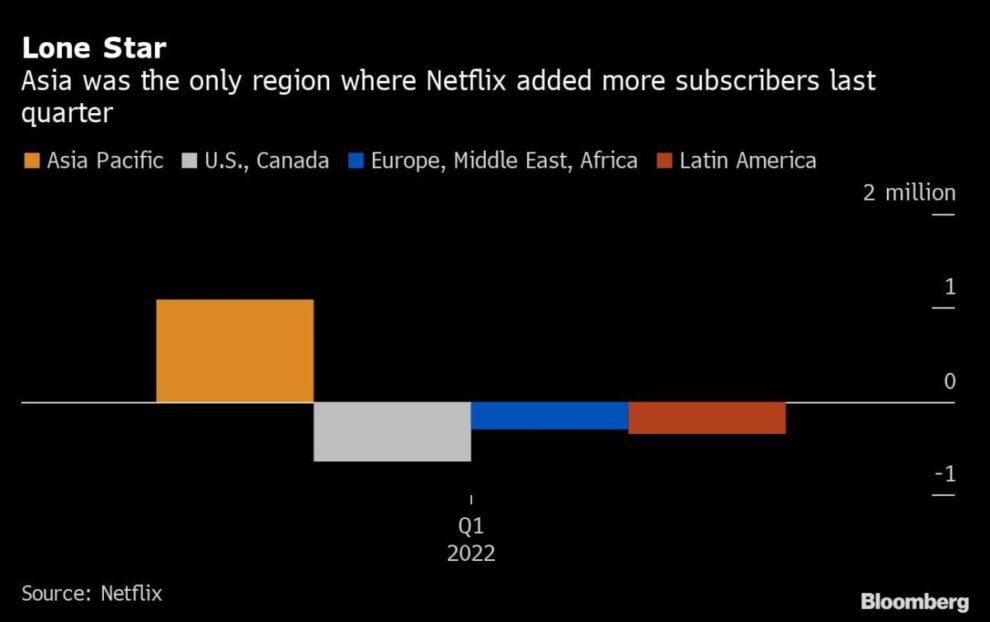 (Bloomberg) -- Netflix Inc. is looking to Asia after its shock first-quarter slowdown, seeking to both maintain growth in the one region where it’s still adding subscribers and replicate its success there in other parts of the world.Most Read from BloombergRussia Slips Into Historic Default as Sanctions Muddy Next StepsA $2 Trillion Free-Fall Rattles Crypto to the CoreHyundai Quietly Climbs the EV Sales Charts and Elon Musk NoticesRep. Mary Miller Calls Roe Decision ‘Victory for White Life’Russi Read More... 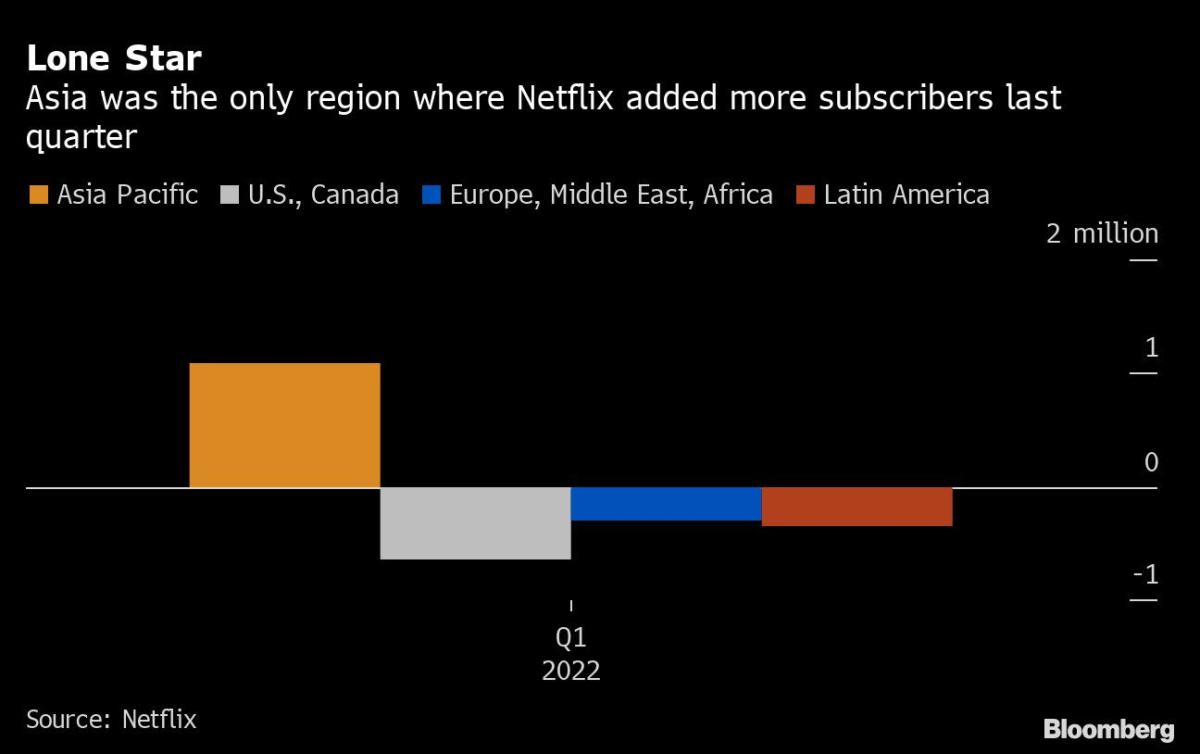 (Bloomberg) — Netflix Inc. is looking to Asia after its shock first-quarter slowdown, seeking to both maintain growth in the one region where it’s still adding subscribers and replicate its success there in other parts of the world.

Despite plans to curb overall spending, investment in Asia will keep growing, including financing for the production of local films and series, Tony Zameczkowski, vice president of business development for Asia Pacific, said in an interview.

While Netflix will continue to offer low-price, mobile-only membership across Asia, it’s also seeking more partnerships with wireless operators and digital payment companies to reach more potential customers in a region where credit card use is less common, he said. The company’s Asia strategy is informing moves in other emerging markets, where the platform must also grow to balance out saturation in North America and Europe.

“Asia is a great proxy for other markets in the world,” said Zameczkowski. “There are similarities between emerging Asia and other emerging markets like Africa and Latin America. Learnings here can be easily replicated or leveraged by those regions.”

The world’s biggest streaming platform is at a critical juncture. Shares surged in recent years as subscriber counts boomed, but the company reported its first loss of customers in more than a decade in April and forecasts another contraction this quarter amid fierce competition from rivals. With two-thirds of its market value wiped out since mid-November, Netflix is under pressure to renew a content pipeline that’s lost shine, while cutting costs.

Read more: Netflix Has Finally Hit a Wall. Where Does it Go From Here?

The company has already made inroads in the Asia Pacific but the broader slowdown gives added impetus to build on the success of South Korean mega-hits like “Squid Game” and “Hellbound,” which boosted subscriptions.

The Asia Pacific region accounts for 15% of Netflix’s 221.6 million global subscribers and is forecast to be the biggest driver of further expansion. After a disappointing start to the year, analysts expect a rebound in the second half will see the company add about 6.8 million members for the whole year, with 79% coming from the Asia Pacific.

Still, the region’s widely differing audiences, preferences and operating environments pose risks. New users in the Asia Pacific totaled 1.1 million in the first quarter, down 20% from a year earlier, and the company has faced cultural and political challenges in penetrating some markets. The series “A Suitable Boy” triggered controversy in India in 2020 over a scene showing its Hindu female protagonist kissing a Muslim man, while the company removed a show for Vietnamese audiences after the government said a map in it violated sovereignty laws.

Netflix’s customers in Asia are also some of its lowest-value ones, which means many more subscriptions are required to juice revenue. The pace of revenue growth is already the slowest since records began in 2017 after low-priced mobile-only plans were introduced across Asia and prices slashed in India. Average revenue per membership fell 5% to $9.21 per month in the Asia Pacific, compared with a 5% increase to $14.91 in the U.S. and Canada.

“They are trying to create a deeper funnel of customers,” said Vivek Couto, executive director of Media Partners Asia. “You can’t increase prices unless you’ve got a significant customer base.”

Netflix also faces keen competition from streaming giants such as Amazon.com Inc. and Walt Disney Co., as well as local companies that have made headway into Asian markets. In Southeast Asia, Viu, owned by billionaire Richard Li, overtook Netflix to become the region’s second-largest streamer last year due to its extensive library of Korean content and a free subscription tier.

To make up for the steep pricing discounts, Netflix must concentrate on expanding the user base, both in high-revenue countries like Japan and Korea as well as emerging markets such as Thailand and Indonesia, said Couto.

This will likely be an uphill challenge. Many people in the country still prefer to watch movies at cinemas and dramas on traditional TV, with streaming services relying heavily on live programming to draw customers. Even Disney, whose Disney + Hotstar is one of the dominant players in the market, is facing a potential subscriber drain after losing the rights to stream the lucrative Indian Premier League cricket matches.

Read more: Netflix’s Bet on India Has Yet to Pay Off Six Years After Launch

While major competitors have all introduced tiered pricing such as mobile-only plans, Netflix is going beyond that to attract sign-ups through innovative payment methods, like allowing users to include their subscription fees in their monthly phone bills or pay via digital wallets.

Netflix offers a wider range of payment choices in Asia than competitors, Couto said. The number of new members signing up last year using alternative payment methods more than tripled from the previous year, and these measures have been adopted in other markets after their successful launch in Asia, according to Netflix.

Asia could also be part of Netflix’s latest plan to raise revenue via introducing advertising. While Zameczkowski said it’s too early to tell in which markets the company will launch the new model, he believes it would make the platform more accessible to customers.

“Even though the company is entering a new phase of slower growth, Asia is very exciting and presents a lot of opportunities,” said Zameczkowski. “We are just getting started.”