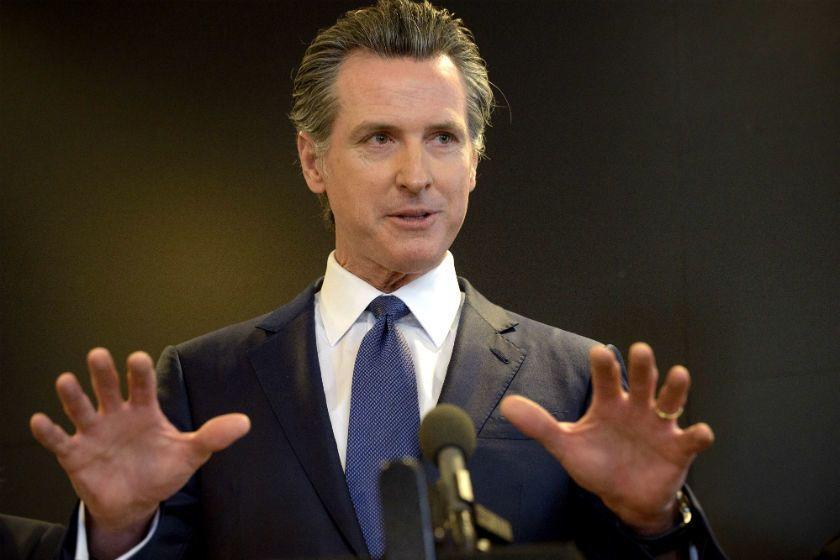 Gov. Gavin Newsom is pushing back on claims that he interfered with a state lawsuit against Activision. A lawyer who quit the agency in protest suggested his actions reflected "political influence." Read More...

Gov. Gavin Newsom is pushing back on claims that he unduly interfered with a discrimination case being brought against Activision Blizzard Inc. after an attorney at the state agency handling the lawsuit suggested Newsom was doing the bidding of the video game giant.

Melanie Proctor resigned from her position as assistant chief counsel for the state’s Department of Fair Employment and Housing on Wednesday in protest of the governor’s recent firing of her boss, Chief Counsel Janette Wipper. In an email to colleagues, Proctor wrote that over the last few weeks Newsom’s office “began to interfere” with a suit the agency was bringing against Activision, pushing for early notice of the agency’s legal strategies and “mimicking the interests of Activision’s counsel.”

Proctor and Wipper stopped working on the Activision case earlier this month.

Mellon said that the governor’s administration “supports the effective work DFEH has done … and will continue to support DFEH in their efforts to fight all forms of discrimination.”

The DFEH suit accuses Activision, a Santa Monica-based company that recently agreed to be acquired by Microsoft in a $69-billion deal, of operating a workplace awash with sexual harassment, wage discrimination and misogynist management.

Alexis Ronickher, the lawyer who’s now representing both Proctor and Wipper, said in a statement that Wipper is now “evaluating all avenues of legal recourse,” including a state law that protects whistleblowers.

Ronickher wrote that Newsom’s office fired Wipper on March 29, “in the midst of her success in pursuing DFEH’s sex discrimination and sexual harassment case against Activision.” On Wednesday, Wipper’s last day with the agency, Proctor resigned in protest of her boss’ dismissal, she said.

“For there to be justice, those with political influence must be forced to play by the same set of laws and rules,” Ronickher wrote.

It’s not clear what might be the basis of Activision’s alleged political influence. The Times was unable to identify any members of Newsom’s administration who have professional ties to the video game company, or vice versa. Nor have executives at Activision Blizzard made any notable donations in support of Newsom’s recent political endeavors.

However, one member of the company’s board of directors, Casey Wasserman, put forward $40,200 for Newsom’s 2018 gubernatorial campaign, and an additional $100,000 to counter the campaign last year to recall Newsom. Activision did not respond to a request for comment from Wasserman.

Activision is also a member of the Entertainment Software Assn., a trade group of the video game industry comprising the 31 top game publishers in the U.S. that has long lobbied the government against video game regulation. The organization contributed more than $48,000 to Newsom’s 2018 campaign for governor and, so far, $20,000 to his 2022 campaign. It also donated $50,000 against the recall.

Approximately $40,000 of Activision’s group dues were used for political contributions or expenditures during fiscal year 2020, Activision wrote in a political activities disclosure report.

Microsoft has been more active in California politics.

As a company, Microsoft donated more than $45,000 to Newsom’s 2018 and 2022 election campaigns, and an additional $15,000 through a political action committee. A member of its board of directors, Reid Hoffman, has donated over $57,000 to Newsom’s campaigns.

Proctor’s and Wipper’s exits come less than two weeks after another government agency, the federal Equal Employment Opportunity Commission, settled its own, similar lawsuit against Activision for $18 million. The decision included a proviso that any employees who take a payout from the fund have to waive their right to receive whatever damages that come out of the state-level DFEH suit.

The two agencies have been locked in a turf war over the case since last year. The DFEH strenuously objected to the EEOC’s federal settlement since it was filed, claiming it would hamper the state’s case. On the day the judge signed the consent decree, DFEH lawyer Jahan Sagafi reiterated the agency’s objections, claiming that “the EEOC never should have filed this case.”

The EEOC won the day, and got in some jabs against the California agency along the way. Last fall, as the DFEH was attempting to intervene in the federal case, the EEOC filed an objection alleging that two DFEH lawyers involved in the Activision case worked on the EEOC investigation before switching jobs — a conflict that could have run afoul of the State Bar of California’s rules of professional conduct. The judge denied the DFEH’s intervention on other grounds.

The two lawyers who allegedly moved from the EEOC to the DFEH went unnamed in the filings. Wipper worked for the California branch of the EEOC until she was appointed chief counsel at the DFEH in 2018. Proctor hasn’t worked for the EEOC in the last five years.

A former deputy attorney general said the governor’s involvement in the Activision case is not particularly unusual and did not constitute interference.

The agency works in tandem with the governor and attorney general’s offices and must get approval for its lawsuits and legal actions, the former deputy attorney general noted.

What is unusual, this person said, is the dispute between DFEH and EEOC — two agencies that often collaborate on cases and view each other as “partners.” The former deputy attorney general speculated that the conflict may have spurred Newsom’s office to pay closer attention to DFEH’s handling of the case.

Kevin Kish, director of the DFEH, said the agency continues to pursue its legacy of litigating “groundbreaking” civil rights cases with the “full support” of Newsom’s administration.

“Our cases will move forward based on the facts, the law, and our commitment to our mission to protect the civil rights of all Californians,” he said in a statement.