(Bloomberg) -- Another day, another hotter-than-expected inflation reading -- and the stock market is sitting at record highs.It wasn’t supposed to go like this. Rising consumer prices were assumed to act as a drag on the value of future earnings, particularly for the duration-heavy technology sector. But look below the S&P 500 Index’s top line and a different picture emerges: Megacap tech stocks are once again dominating and are accounting for nearly all the gains.Even the strongest price press Read More... 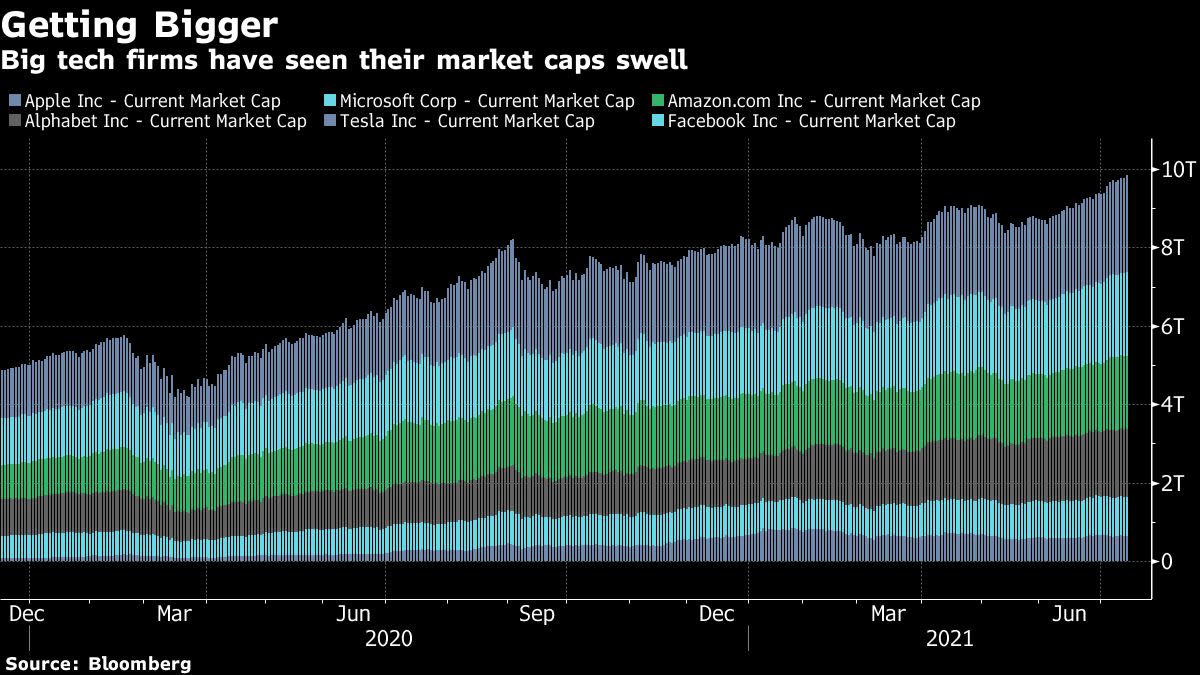 (Bloomberg) — Another day, another hotter-than-expected inflation reading — and the stock market is sitting at record highs.

It wasn’t supposed to go like this. Rising consumer prices were assumed to act as a drag on the value of future earnings, particularly for the duration-heavy technology sector. But look below the S&P 500 Index’s top line and a different picture emerges: Megacap tech stocks are once again dominating and are accounting for nearly all the gains.

Even the strongest price pressures in over a decade have been unable to shake the Faang fortress. On a day the core producer price index rose the most on record and one day after June’s inflation report showed consumer prices accelerated well past expectations, the S&P 500 Index managed to gain 0.1%.

Investors have been content to buy into the Federal Reserve’s party line that policy makers would look past what they view as transitory inflation. Central bank chief Jerome Powell hammered that message home again Wednesday, arguing that the “substantial further progress” needed to begin removing accommodation still hasn’t been met. That message gave the green light to the likes of Apple Inc., Alphabet Inc. and Netflix Inc. to power ahead, lifting the S&P 500 higher.

Tech was among the top-performing sectors Wednesday. And while 429 stocks in the S&P 500 fell on Tuesday, tech was the only sector to close in the green — cushioning the index’s 0.4% drop. That’s the S&P 500’s largest number of decliners for a drop that small since at least 1996, according to Callie Cox, senior investment strategist at Ally Invest.

“At this point, until there’s a better alternative or there’s some type of negative earnings news or a slowing in momentum of those stocks, I think they’ll continue to do well,” said Eric Diton, president and managing director of The Wealth Alliance.

Cyclical stocks had, for a few months at least, usurped tech’s hegemony amid the economic reopening — but megacaps have resurrected their leadership once again.

Just eight stocks — the Faamg group of Facebook Inc., Apple, Amazon.com Inc., Microsoft Corp. and Google parent Alphabet, alongside Netflix, Nvidia Corp. and Tesla Inc. — accounted for more than half the S&P 500’s 7.6% gain since May 12, according to data from Bespoke Investment Group. And their weighting in the index rose to more than 27%.

Signs of a weakening economy have rattled financial markets in recent weeks, putting steady growers, such as tech stocks, back in vogue. After second-quarter results finish rolling out, income growth for S&P 500 firms is forecast to slow in each of the next three quarters, and the pace of the economic expansion is set to slow too, meaning that the market’s currently in a so-called peak growth environment.

“We have a situation where we’re looking at really good numbers in terms of earnings at the same time that we are looking out into the future and wondering whether we can keep these high numbers — and certainly whether we can have even better numbers in the future,” said Stephen Dover, chief market strategist and head of Franklin Templeton Investment Institute. But, “in a lower growth environment, technology would tend to outperform.”

Others have also noted that it’s been a record run with record low participation. The S&P 500 has hit a record just about every three days this year, but few of its components are trading above their 50-day moving averages, Jason Goepfert, president and founder at Sundial Capital Research, wrote in a note.

“If you believe inflation is more than a temporary issue and will eventually lead to a steeper yield curve, you should favor those sectors with a higher shareholder yield,” said Adam Phillips, managing director of portfolio strategy at EP Wealth Advisors. “Based on this approach, it is not surprising to see tech shares outperforming after yesterday’s CPI report was seen by many as supporting the ‘transitory’ argument.”