(Bloomberg) -- Tesla Inc.’s ascent into the most exclusive of corporate clubs -- the $1 trillion capitalization set -- has investors guessing on which company will be the next to join.Most Read from BloombergInto the Metaverse: Where Crypto, Gaming and Capitalism CollideCan a New Mayor Fix Seattle’s Downtown?The Terrifying Rise of Haunted TourismIn Minneapolis Election, the Future of Policing Is at StakeThe Best New Restaurants in Washington, Chosen by Top ChefsThe technology industry represents Read More... 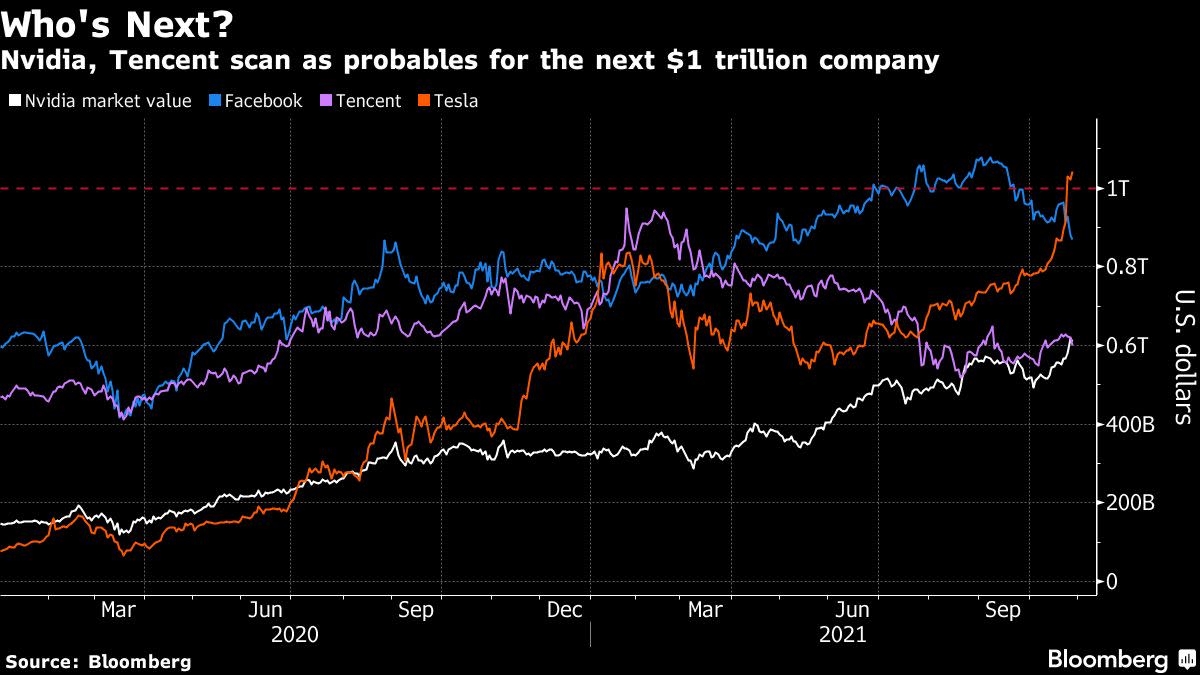 (Bloomberg) — Tesla Inc.’s ascent into the most exclusive of corporate clubs — the $1 trillion capitalization set — has investors guessing on which company will be the next to join.

The technology industry represents five of the six current members and may well be the spawning ground for the next. But there is competition. The commodity supercycle, the global push for clean energy and biotechnology developments could all produce candidates.

It’s an important issue. Membership of the club doesn’t just earn bragging rights for the likes of Elon Musk and Jeff Bezos, it also makes the companies hard to ignore for investors well beyond Wall Street. That could bring some welcome stability to shares such as Tesla, further boosting their attraction.

The most immediate competition is between Nvidia Corp. and Tencent Holdings Ltd. Chipmaker Nvidia is touted to as the big winner in the future of gaming and machine learning, thanks to its market-leading computer graphics card. Tencent, on the other hand, is a bet on China’s high-growth digital economy.

While both those stocks need to rise about 60% to make the club, it should be noted that Nvidia has risen more than 75% in four of the last five years. Tencent has been less successful.

“Regulation is an uncertainty, but China’s digital economy will continue to grow and Tencent will be part of it,” said Peter Garnry, head of equity strategy at Saxo Bank. He sees Nvidia, Tencent, PayPal Inc., ASML Holding NV and TSMC Ltd. as potential candidates in the next few years.

Tencent was at the cusp of hitting the milestone in January, but since then it’s been a downward slide for the WeChat owner due to Beijing’s crackdown on gaming and digital companies. Facebook Inc. saw a similar fate, with the social media giant losing its place in the club amid a slowdown in digital advertising and negative news about the platform.

ASML, which is the biggest equipment maker for the semiconductor industry, could spearhead Europe’s entry into the elite group in the next few years. The region’s drive for clean energy may spawn other candidates as the industry benefits from the push toward ESG investing.

“Cleantech will be massive as climate change and a cleaner world are stated political goals and the industry will solve some of the biggest problems this world is facing,” Garnry said.

Those signs are evident with Tesla’s rise this week.

“The overlay of important ESG/Climate related factors may also be a contributing influence where Tesla is seen by many as the ‘main event’ in renewables,” wrote Morgan Stanley analyst Adam Jonas.

For tech investor Ryan Jacob at Jacob Asset Management, the next trillion-dollar company could be a spin-off from the existing heavyweights. Though none of the tech elite have shown such intentions, he said YouTube spinning off from Alphabet Inc. and AWS being hived off from Amazon.com Inc. could well be the future trillion-dollar baby.

“Ebay did that with Paypal and PayPal went on to beat Ebay in size and growth,” Jacob said by phone.

Still, it may be a while before the market has another megaweight stock to celebrate. The possibility of higher interest rates in the U.S. as early as next year could damp demand for technology stocks as investors calculate that future earnings will be less valuable amid higher borrowing costs.