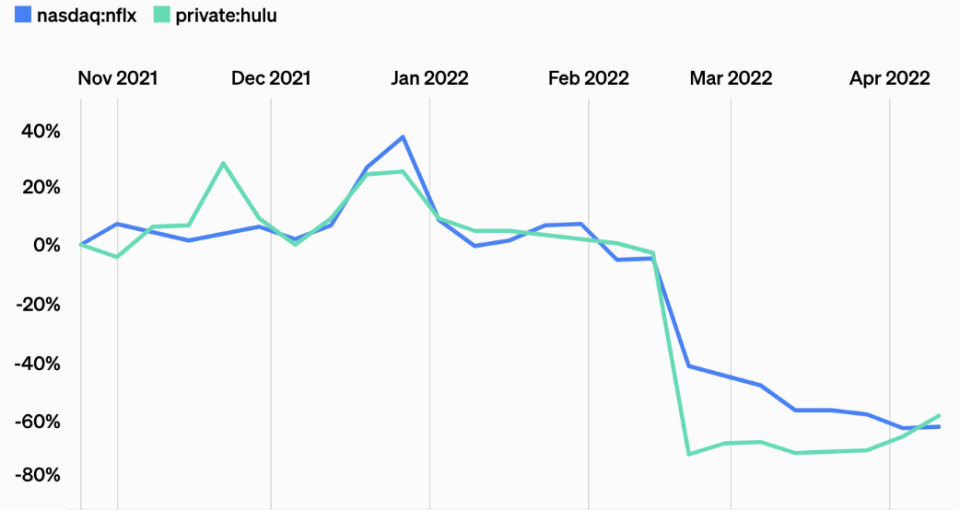 Netflix has fallen on un-Netflix like times. Read More...

Netflix has seen a 67.8% crash in daily page views per million in the last six months, according to data from researcher Thinknum.

Daily pageviews look to have hit a short-term peak in late December, as seen in the chart below:

“Warmer weather has arrived, along with a widespread return of in-person events — though this is good news for most, it may spell trouble for streamers,” the research team at Thinknum stated. “With Netflix’s April 19 announcement of a drop in subscribers, page views will continue to be a metric to watch.”

Shares of the streaming media giant crashed nearly 40% on Wednesday as the company delivered another disappointing quarter, sparking fresh worry on the Street about future growth potential. Netflix saw a decline of 200,000 in net subscribers in the first quarter. The company forecasts subscribers to decline by 2 million in the current quarter.

The stock tanked another 4% on Thursday on news billionaire investor Bill Ackman dumped his entire stake in Netflix, which he purchased back in January.

“I think its best days are behind it,” Macquarie Tech Analyst Tim Nollen said on Yahoo Finance Live (video above).

Nollen is one of the few Wall Street analysts to have downgraded Netflix shares months earlier. And in the wake of the stock’s destruction, the analyst is standing by his Sell rating on Netflix even

“We certainly are avoiding the stock and selling the stock for now,” Nollen said. “Eventually, if they can turn this around there is still a good growth opportunity for them — particularly internationally.”