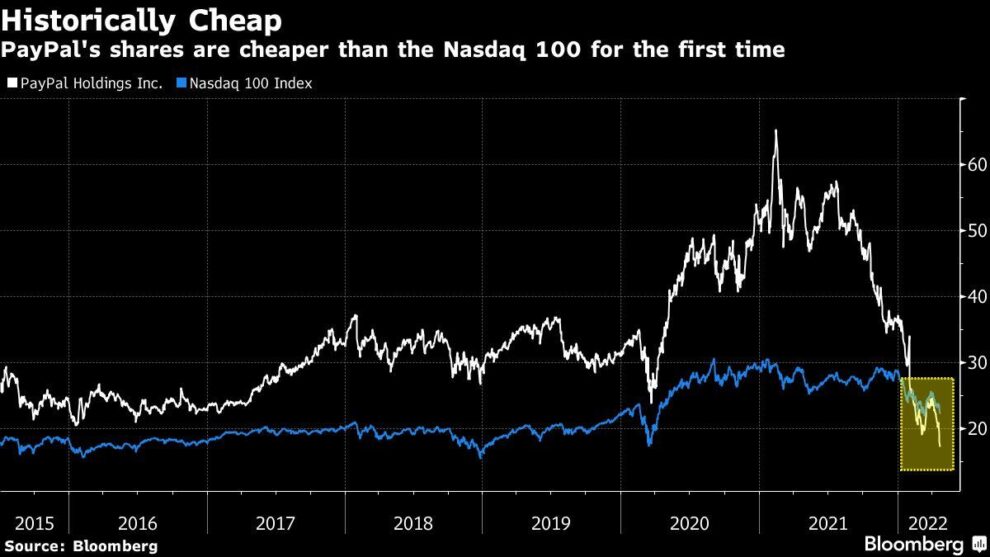 (Bloomberg) -- Even as PayPal Holdings Inc. has gotten swept up in the selloff in technology stocks, the investment case for the digital-payments company has only gotten stronger, in the view of analysts, given its record-low valuation and the trends in favor of e-commerce.Most Read from Bloomberg‘Weak Sauce’: Elon Musk’s 2018 Feud With Saudi Fund RevealedAnger in Japan as Ukraine Links Emperor Hirohito to Adolf HitlerUkraine Latest: U.S. Vows to Step Up Weapons for KyivUkraine Latest: Zelenskiy Read More... 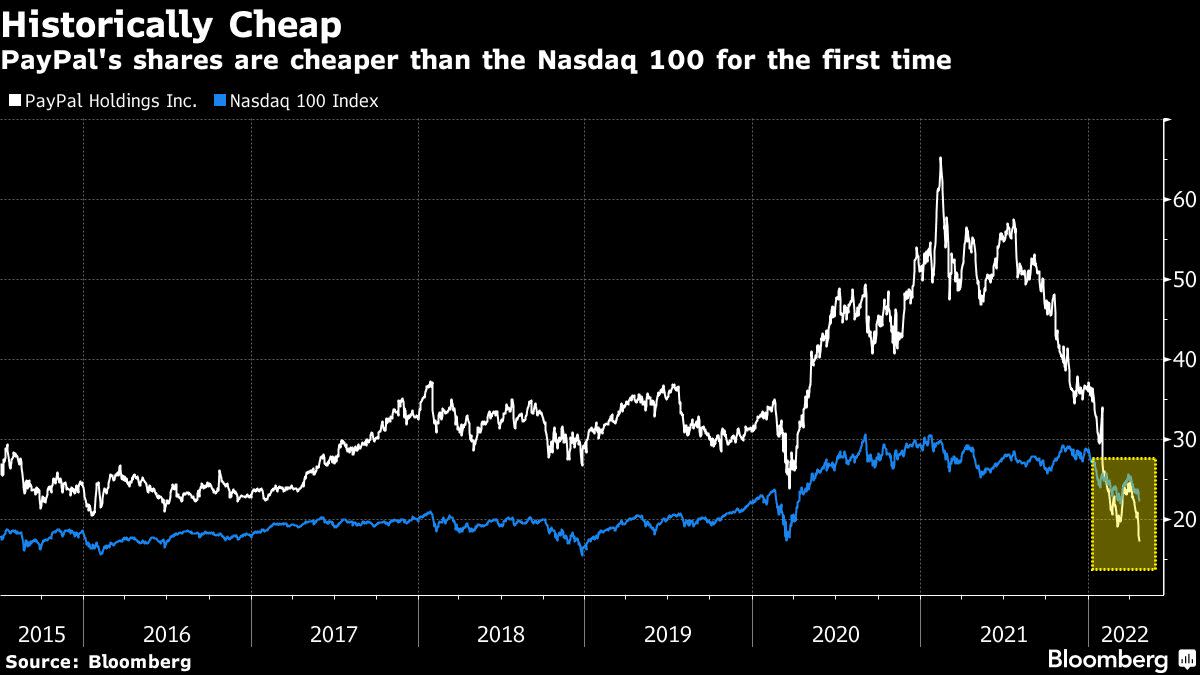 (Bloomberg) — Even as PayPal Holdings Inc. has gotten swept up in the selloff in technology stocks, the investment case for the digital-payments company has only gotten stronger, in the view of analysts, given its record-low valuation and the trends in favor of e-commerce.

Wall Street sees the company’s shares jumping 90% over the next year, according to data compiled by Bloomberg. Only Etsy Inc. has a stronger potential return among companies in the S&P 500. Paypal shares rose 0.5% in early trading on Monday.

Brokers are less optimistic in the short term, cutting their aggregate target for PayPal’s share price by half. Yet the stock has been declining even faster, making it a bargain at these levels, according to bullish investors.

“The PayPal story is still very strong longer term,” said Hans Albrecht, portfolio manager at Horizons ETFs Management. “At some point the tide will turn, as valuations are starting to look very interesting.”

PayPal’s stock has tumbled more than 70% since its July peak, erasing all its pandemic-driven gains. That’s because consumers are cutting back on online shopping as the waning pandemic sends them back to stores, and also because a once-in-a-generation level of inflation is pushing prices up.

For the first time, the shares are now cheaper than the Nasdaq 100 Index, at 17 times estimated earnings versus a multiple of 22 for the benchmark. Other payment stocks are even pricier, with Visa Inc. at a multiple of 27, Mastercard Inc. at 32 and Block Inc. at a whopping 71.

In February, PayPal flagged that growth in spending on its platform was slowing as in-store shopping made a comeback, and it forecast revenue growth that was below analyst expectations. Brokerages have since cut their sales growth outlook to 15.5%, the lower end of the firm’s forecast of 15% to 17%.

Paypal suffered a big stock decline in the wake of that report three months ago, as did megacaps Meta Platforms Inc. and Netflix Inc. when they announced disappointing fourth quarters. Last week, Netflix tumbled anew on its first-quarter results; investors now will be watching earnings from Paypal and Facebook owner Meta on Wednesday to see if they too disappoint again.

“This is particularly relevant given the recent step change in consumer behavior towards digital channels and its longer-term platform opportunity, which we believe has an ongoing multi-year impact on the growth rate,” he said in a note published late Friday. Shirvaikar maintained his buy rating on the stock but cut his share price target to $140 from $185.

The selloff in tech stocks is putting investors on edge just as some of the biggest companies prepare to report quarterly earnings. The Nasdaq 100 Index declined 3.9% last week, hit by investor concern that the Federal Reserve will be more aggressive than expected in tightening monetary policy. The tech-heavy benchmark fell for the third week in a row, its longest losing streak since October, with $1.89 trillion in market value wiped out in that span.