PayPal (PYPL) has affirmed its commitment to fighting for racial and economic equity by investing in overlooked entrepreneurs. The payment giant will invest $50 million as it looks to create wealth opportunities for diverse founders. The new $50 million investment builds on a similar investment to eight black and Latinx-led venture capital funds late last year. The investment spree is part of PayPal’s $535 million investment plan as it looks to support businesses owned by minorities and members of under-represented communities. PayPal expects the investments to go a long way in enhancing equitability in society as it continues to champion for diversity and a more inclusive economy. (See PayPal stock analysis on TipRanks) “Over the long-term, the $100 million we are investing in 19 exceptional venture capital firms will help to foster the next generation of diverse founders that are building products and services that empower a more inclusive economy,” said PayPal CEO Dan Schulman. In addition to providing the much-needed financing, PayPal will work with the funds to deepen industry ties and provide industry expertise while investing much-needed resources. Mizuho Securities analyst Dan Dolev has reiterated a Buy rating on the stock following an impressive first-quarter report. Dolev stated, “Following a stellar 2020, PYPL showed in 1Q21 that it can comp the COVID e-commerce boom and still outperform expectations by a wide margin. With third-party verification trends accelerating across the board, top and bottom-line beats, and guidance raises despite headwinds, we believe saying that they "crushed it" would be an understatement.” The analyst has a $375 price target on the stock implying 43.47% upside potential to current levels. Consensus among analysts on Wall Street is a Strong Buy based on 20 Buy and 2 Hold ratings. The average analyst price target of $317.50 implies 21.48% upside potential to current levels. PYPL scores 7 out of 10 on TipRanks’ Smart Score rating system, implying its performance is likely to align with market expectations. Related News: Sony’s Strategic Investments to Cost $18B in 3 Years Tesla Sets up Data Center to Store EV Data in China – Report Coinbase Set Sights on Institutional Investors with Coinbase Prime More recent articles from Smarter Analyst: Mondelez to Acquire Chipita for $2B, Expand Bakery Portfolio Workday Beats Analysts’ Expectations in Q1; Shares Down Allscripts to Buy Back $350M in Stock; Shares Jump 5% Amazon Tables $8.45B Acquisition Bid for MGM Read More... 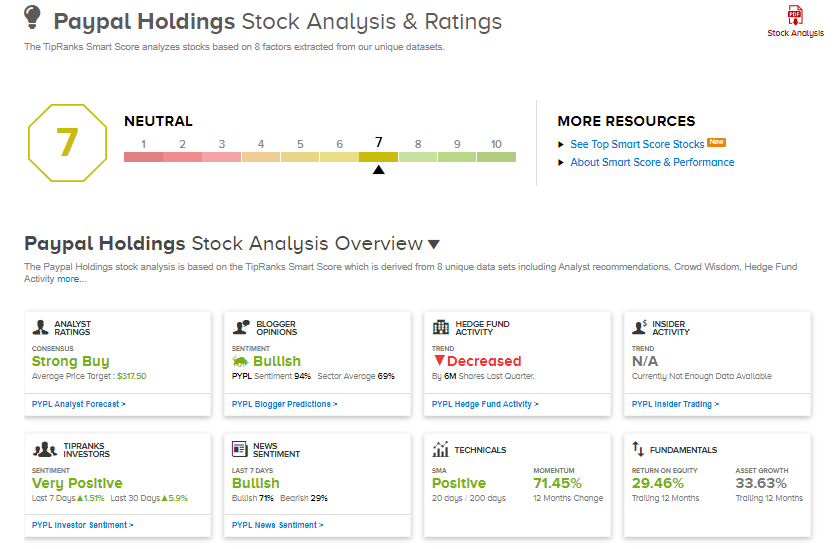 U.S. Tech Firms Cozy Up to China Despite Trade Turmoil

As construction kicks off on Potomac Yard Metro, a second entrance remains in limbo