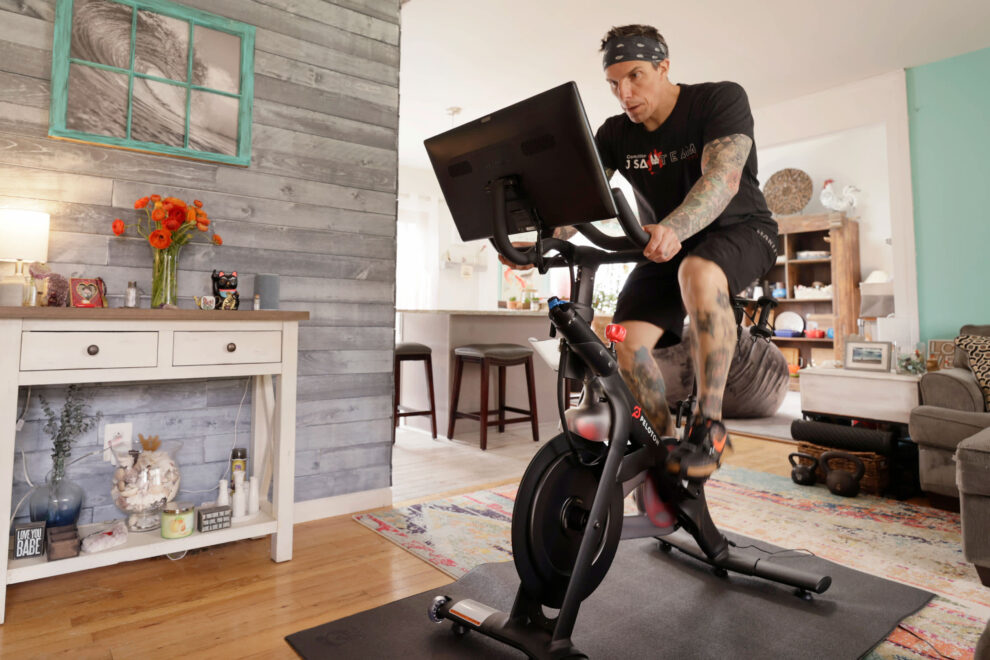 Peloton has pursued sweeping changes, including price hikes and a shift to emphasizing subscriptions, that have yet to fully pay off. Read more...

Brody Longo works out on his Peloton exercise bike on April 16, 2021 in Brick, New Jersey.

Peloton on Thursday reported widening losses and slumping sales for its fiscal fourth quarter as the connected fitness equipment maker attempts to win back investors with cost cuts and strategic shifts.

The company’s shares declined more than 19%, a day after the stock surged more than 20% on news of its partnership with Amazon.

It marks Peloton’s sixth consecutive quarter of reported losses. The company said it aims to reach break-even cash flow on a quarterly basis in the second half of its fiscal year 2023.

Since McCarthy took over as chief executive from Peloton founder John Foley in February, the company has pursued sweeping changes that have yet to fully pay off. Peloton raised membership fees, hiked prices on some equipment, laid off thousands of workers, tested a rental option, exited last-mile delivery and transferred all production over to third parties. On Wednesday, Peloton also started selling a portion of its products on Amazon in the United States, its first such deal with another retailer.

“The naysayers will look at our [fourth-quarter] financial performance and see a melting pot of declining revenue, negative gross margin, and deeper operating losses,” McCarthy wrote in a letter to Peloton shareholders.

“But what I see is significant progress driving our comeback and Peloton’s long-term resilience,” he said. “We still have work to do.”

Peloton did not offer an outlook for its upcoming fiscal 2023. For the first quarter that ends on Sept. 30 it said it sees subscribers staying flat, and revenue ranging between $625 million and $650 million, which is short of analysts’ estimates. Peloton said this takes into account near-term demand weakness and seasonal fluctuations to the business.

There was a silver lining for the company: This marked Peloton’s first reported quarter where higher-margin subscription revenue accounted for the majority of total sales.

During a call with analysts, McCarthy also touted a number of things Peloton is still testing to drum up sales. Those include selling pre-owned bikes, renting bikes for a monthly fee and adding new tiers to Peloton’s digital app, including a premium tier where people would pay more for expanded content and better features.

“It is not enough to just cut expenses, we have to grow revenue,” he said.

Using the movie rental wars as an example, McCarthy said that Netflix was able to come out on top of Blockbuster, a movie rental business that filed for bankruptcy in 2010, because it offered its customers personalized content and lots of choices.

McCarthy said the losses stemmed from Peloton’s efforts to avoid an inventory glut, cut fixed costs and address other supply chain issues. The company earlier this year embarked on an $800 million restructuring plan. Peloton ended the fourth quarter with inventory of $1.1 billion, compared with $937.1 million a year earlier.

Revenue fell 28% to $678.7 million from $936.9 million a year earlier. That came in short of the $718.2 million that analysts had been looking for, according to Refinitiv estimates.

Within that figure, connected fitness revenue that includes the contribution from Peloton’s Precor business dropped 55% to $295.6 million.

Peloton’s connected fitness gross margin was another bleak point, at negative 98.1% compared with positive 11.7% a year earlier. Peloton said it experienced higher logistics expenses per delivery, increased port and storage costs, plus charges related to the recall of its Tread+ treadmill machine.

Peloton booked $383.1 million of subscription revenue, up 36% from the prior year and representing 56.4% of total company sales. Subscription gross margin ticked up to 67.9% from 63.3%.

McCarthy, who previously worked at Netflix and Spotify, has made it clear he is more interested in pursuing growth on the subscription side of Peloton’s business, rather than putting such an emphasis on hardware. He believes Peloton’s digital app will be core to the company’s future success.

Peloton burned through $412 million in cash in the fourth quarter, after it averaged negative cash flow of $650 million in each of the prior two quarters. It ended June with $1.25 billion in cash reserves and a $500 million revolving credit facility.

BMO Capital Markets analyst Simeon Siegel applauded McCarthy for making some “very constructive decisions” to stem a cash bleed in recent months. But, he said, Peloton may be facing a bigger issue of brand saturation.

Peloton ended its latest quarter with 2.97 million connected fitness subscriptions, about flat with prior-quarter levels and up 27% from a year ago. Connected fitness subscribers are people who own a Peloton product, such as its original Bike, and also pay a monthly fee for access to live and on-demand workout classes.

Its total member count, though, declined by about 143,000 people from the prior quarter to 6.9 million. McCarthy, following Foley’s initial vision, has said the company hopes to one day amass 100 million members.

Peloton’s average net monthly churn levels for connected fitness users ticked up to 1.41% from 0.73% a year ago.

The company said this was ahead of its internal expectations in part due to a consumer protection ruling in Canada that forced all customers in the country to approve the subscription price hikes that took effect in June, and about 85% of them have done so to date. Peloton said it had expected that some people would drop their memberships after prices rose.

But investors might be wary of the leap. A lower churn rate would be better news for Peloton, as it means people are sticking around and continuing to pay for their memberships.

McCarthy said in the letter to shareholders that the fourth quarter should prove to be the “high water mark” for write-offs and restructuring charges related to inventory and supply chain challenges. It should also mark the beginning of Peloton’s comeback story, he said.

Peloton shares have dropped around 60% year to date, as of Wednesday’s market close. Its market cap has fallen below $5 billion, after reaching as high as almost $50 billion in early 2021.