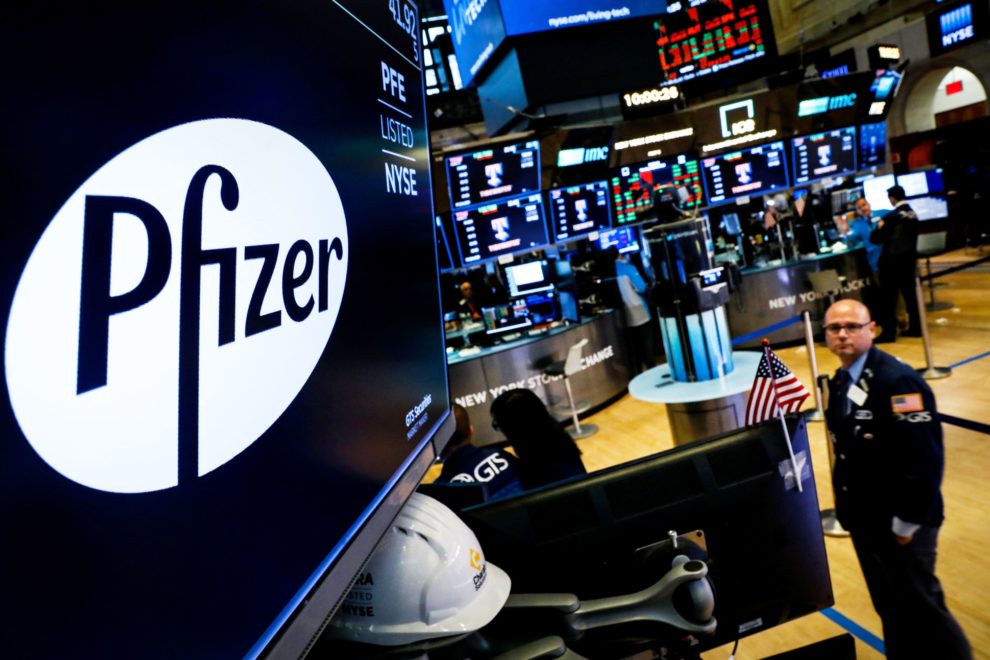 Pfizer posted a third-quarter profit well ahead of analysts' estimates on higher sales of breast cancer drug Ibrance and raised its earnings forecast for the year, sending the largest U.S. drugmaker's shares up 3%. Read more...

Shares of the company rose 3.4% on Tuesday as the results suggested that Chief Executive Officer Albert Bourla’s efforts to slim down the sprawling drugmaker were paying off.

Pfizer announced in July it would separate its off-patent branded drugs business and combine it with generic drugmaker Mylan NV, allowing it to focus on its more profitable drugs.

Bourla said on Tuesday Pfizer would become a “smaller, science-based company” following the Mylan deal, which is expected to close next year.

Although sales of Ibrance rose to $1.28 billion and those of rheumatoid arthritis drug Xeljanz jumped nearly 39% to $599 million, analysts called out Vyndaqel as the biggest surprise in the quarter.

Vyndaqel, chemically known as tafamidis, was approved in May and brought in revenue of $156 million, nearly double the consensus estimate of $82 million.

Priced at $225,000 per year, Vyndaqel’s high cost has faced criticism, with experts affiliated with Boston-based Institute for Clinical and Economic Review (ICER) warning that it could be among the most costly cardiovascular treatments ever sold.

“Importantly, Ibrance is back to strong growth after a period of slowing … (and) the Vyndaqel number, in particular, is impressive,” UBS analyst Navin Jacob said.

The company also said sales of its patented medicines benefited from demand in emerging markets, which contribute about a quarter of total sales.

Net income attributable to Pfizer’s shareholders rose nearly 87% to $7.68 billion, or $1.36 per share, as the company recognized a gain of $8.1 billion after closing its consumer health joint venture with Britain’s GlaxoSmithKline Plc.

Investor sentiment on Pfizer has been poor since it announced the deal with Mylan, making the third-quarter beat a relief, Jacob said.

Including Tuesday’s gains, Pfizer shares had lost about 11% of their value since the deal with Mylan was announced.

Total revenue fell about 5% to $12.68 billion as sales of pain treatment Lyrica, which recently lost patent protection in the United States, more than halved to $527 million.

NewsWatch: The big mystery in the GDP report — where did the inventories come from?

Facebook working out how to protect children after encryption

The Margin: Mitt Romney knew he’d hear ‘abuse’ from Trump and his supporters — and boy, was he right

Market Extra: Oil plunges 25% and investors brace for a race to the bottom, as an all-out OPEC ‘price war’ erupts between Saudi Arabia and Russia