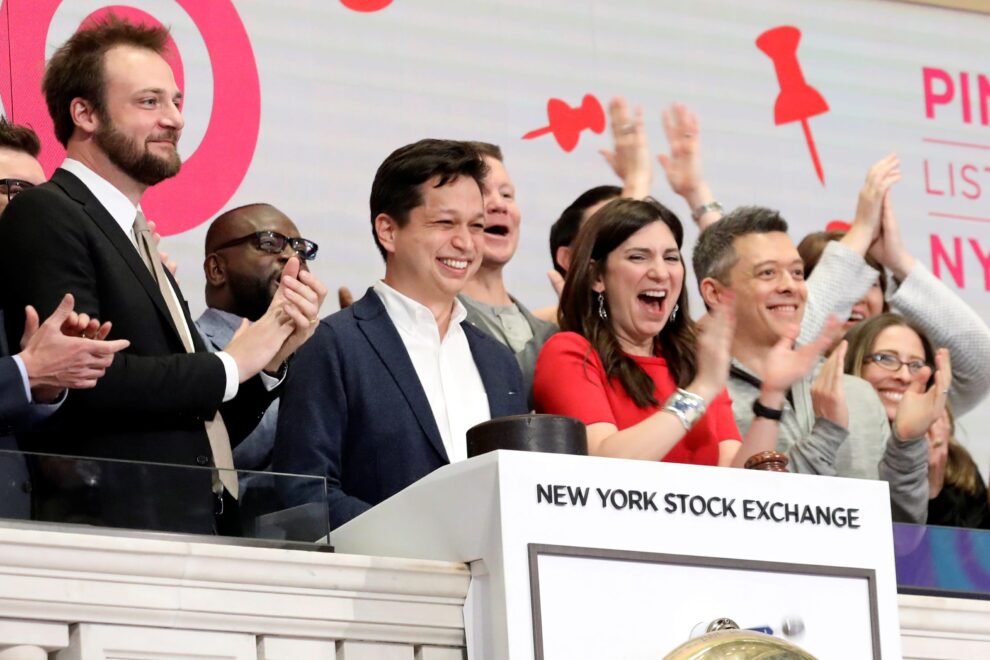 Pinterest's boost from a rebound in advertising likely signals positive things for its tech peers that also have major advertising businesses. Read more...

Shares of Pinterest surged more than 33% Thursday, as investors rallied around the company’s blowout third quarter earnings that indicated advertising demand revved up after a difficult period due to the Covid-19 pandemic.

Shares in tech companies Facebook, Google-parent Alphabet, Amazon and Twitter were also up, helping recover some of Wednesday’s losses. Pinterest’s boost from a rebound in advertising likely signals positive things for its tech peers that also have major advertising businesses. Alphabet, Facebook, Twitter and Amazon, which has a growing advertising business, are all scheduled to report earnings Thursday afternoon.

Analysts went into Pinterest’s earnings with high expectations, especially after Snap’s third-quarter earnings showed “continued resilience” from direct-response advertising, which is used by marketers to elicit an immediate response like clicking a link. The industry is also seeing the beginnings of a recovery in brand advertising, which was harder-hit during the pandemic.

Pinterest said it also benefited from advertisers boycotting other social media platforms like Facebook and Twitter due to the spread of toxic content and misinformation. CEO Ben Silbermann said on the company’s earnings call advertisers “want to be around positivity as they build their brands, and that’s contributing to our growth as well.”

Pinterest saw total revenue of $443 million in the third quarter, an increase of 58% year-over-year. The company forecasts its Q4 revenue will grow 60% year-over-year, saying uncertainty remains around the pandemic and other factors.

Though Pivotal Research analyst Michael Levine said he already had “very high expectations” that had progressively increased given its recent stock outperformance and after Snap’s results last week, Pinterest “more than delivered the goods” in the third quarter.

“Consistent with SNAP, business seemingly accelerated over the course of the quarter, as both Brand and DR spend rebounded,” he wrote in a note Thursday.

Morgan Stanley analysts said in a note Thursday the direct response and brand ad markets continue to show signs of a faster-than-expected recovery. They added that bullish digital ad trends are likely to continue into the “shelter-in holiday” as retailers and marketers increasingly invest and experiment in digital to reach shoppers.

Some positive trends are likely to continue in earnest as consumers stay at home: Emarketer analyst Andrew Lipsman said Pinterest is “especially well positioned for the moment” because of users flocking to the site for inspiration while they’re at home in the pandemic and also benefiting from a surge in e-commerce.

Aaron Goldman, chief marketing officer at advertising software company Mediaocean, said in an email that brands using the company’s closed ecosystems platform increased ad spend almost 40% year-over-year in the third quarter. He also said he expects Pinterest’s shopping tools to take off with consumers and brands as the company embeds shopping ad units into more places on the app.

MKM Partners, while upgrading the stock to Buy, said Thursday that it also expects the company’s shopping tools to grow.

“It is still early days as far as shopping on Pinterest is concerned,” the firm said. “Catalog growth and integration with leading eCommerce ecosystem stakeholders such as Shopify is going to increase the importance of Pinterest in the overall shopping funnel.”

Want to get your finances in order in 2020? Make this one New Year’s resolution

Tilray Slides on Loss, While Analysts Focus on Revenue Beat

FA Center: Here’s what interest rates are saying about stock and bond returns for the next 5 years — the bulls won’t believe it