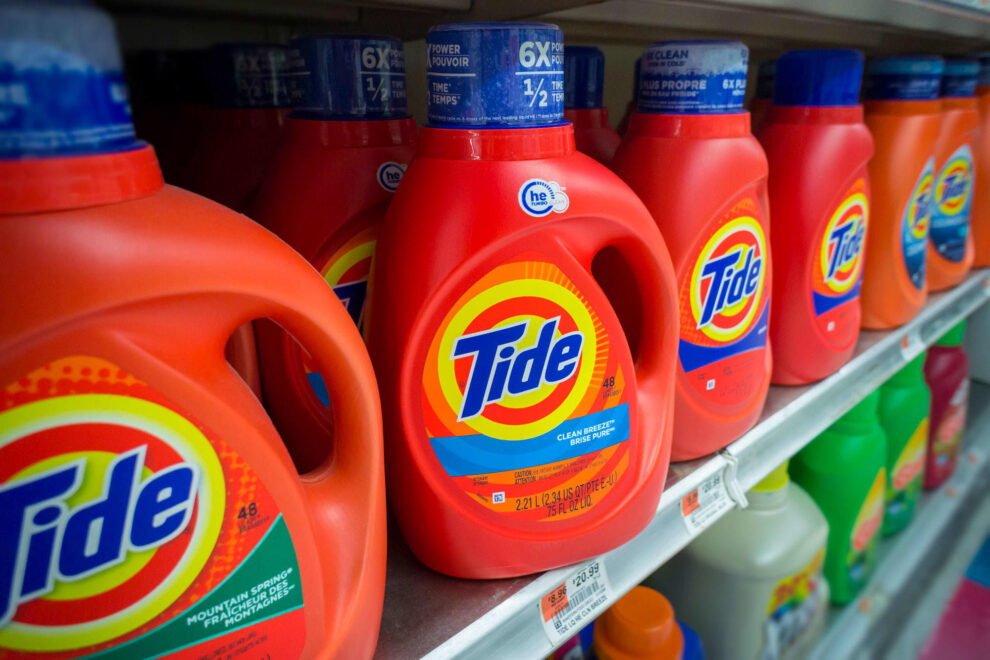 Shares of Procter & Gamble have fallen 21% this year, dragging its market value down to $306.4 billion. Read more...

The maker of Tide detergent, Charmin toilet paper and Pampers diapers also said it’s expecting foreign currency to hit its fiscal 2023 results more than previously expected. Net sales are expected to decline 1% to 3%, lower than its previous outlook of flat to up 2%. P&G is now forecasting earnings per share on the low end of its prior range of flat to up 4%.

The stock rose 1.7% in premarket trading.

Net sales for the quarter rose 1% to $20.61 billion, topping expectations of $20.28 billion. Unfavorable foreign exchange rates dragged revenue down by 6%.

When stripping out the impact of acquisitions, divestitures and foreign currency, the company said organic revenue climbed 7% in the quarter. Higher prices fueled organic sales growth and offset a 3% volume decline.

The company has been raising prices on products to mitigate rising costs, but the strategy has hurt consumer demand for its products, leading to shrinking volume for the last two fiscal quarters.

Executives stood by the strategy, expressing confidence that it hadn’t sparked any significant changes in consumer behavior.

“We feel very good about the consumer reaction to our price increases because we don’t see any major trade downs,” Andre Schulten, the company’s chief financial officer, said on a call with reporters.

However, he added that some categories in certain markets have seen their market share temporarily pressured. For example, P&G slashed marketing spending for laundry detergent in the U.S. due to supply constraints, leading some customers to buy other brands instead, according to Schulten. He said the supply issues have been fixed and P&G’s market share for the category is rebounding.

Schulten also said that 2% of volume declines during the quarter is due to its smaller Russian portfolio. Like many global companies, P&G moved to reduce its Russian exposure after the Kremlin invaded Ukraine earlier this year. The company has stopped marketing and new capital investments in the country and scaled back the products it sells there. Russia previously accounted for less than 2% of P&G’s global sales.

P&G’s grooming business, which includes Gillette and Venus razors, was the company’s only unit to report volume growth for the quarter. The segment’s volume rose 1%, although the company noted a slowdown in grooming appliances.

There were a few other bright spots for P&G’s volume. Skin and personal care, which is part of the company’s beauty segment, saw higher demand, fueled by new and upgraded products. A strong cold and flu season drove volume growth of its personal health care segment, which includes brands like Vicks and Zzzquil.

For the three-month period ended Sept. 30, P&G reported a net income of $3.94 billion, or $1.57 per share, down from $4.11 billion, or $1.61 per share, a year earlier. The company’s gross margin fell 1.6% compared with the year-ago period, weighed down by higher freight and commodity costs.