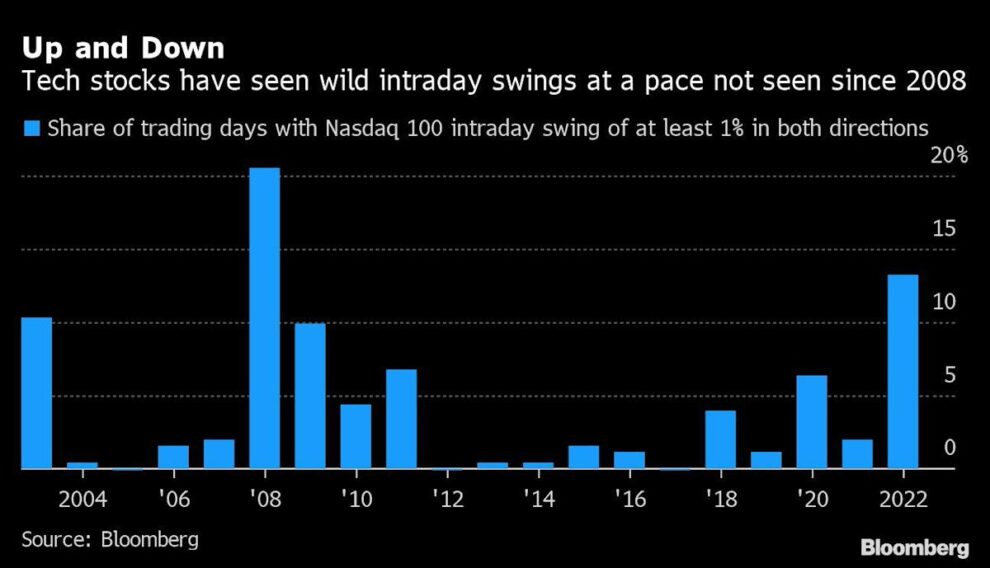 (Bloomberg) -- Milestones have followed one after another for technology stocks in this week’s market meltdown: Apple Inc. is no longer the world’s most valuable company, Amazon.com Inc. is on its longest losing streak in 14 years and the Nasdaq 100 Index is on pace for its biggest weekly slump since January.Most Read from BloombergSony PlayStation Staff Fume Over CEO’s Abortion CommentsElon Musk Sows Doubt Over His $44 Billion Twitter TakeoverUkraine Latest: US Senator Delays Aid Vote; Russia E Read More... 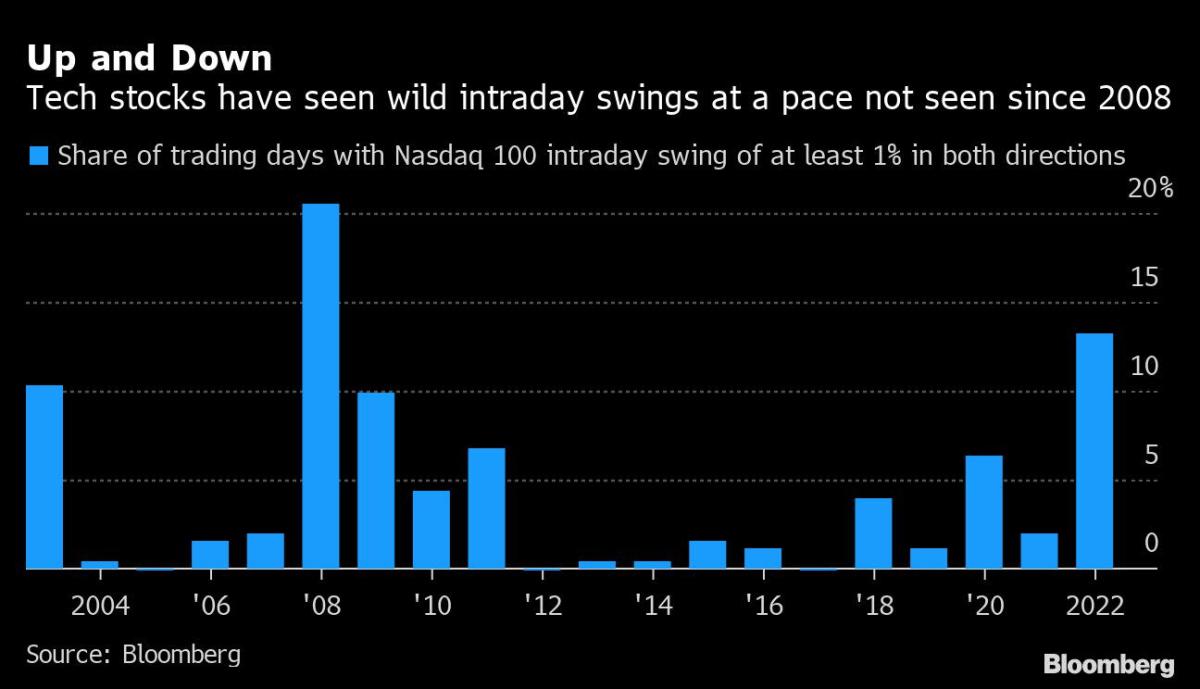 (Bloomberg) — Milestones have followed one after another for technology stocks in this week’s market meltdown: Apple Inc. is no longer the world’s most valuable company, Amazon.com Inc. is on its longest losing streak in 14 years and the Nasdaq 100 Index is on pace for its biggest weekly slump since January.

Blame the Federal Reserve, as policy makers rush to aggressively raise interest rates in their fight against inflation. And supply-chain concerns that are hurting earnings forecasts. Frothy valuations are another reason that investors have fled growth stocks, while chaos in the crypto market has also added to the growing wall of worry.

In the latest example of volatility in both directions, stocks staged a solid rebound on Friday, with the Nasdaq 100 Index gaining 2%, though it remains solidly lower for the week.

“My outlook for tech is positive, but accommodative Fed policy had become mother’s milk, and this will be a painful weaning process,” said Kristina Hooper, chief global market strategist at Invesco Ltd., who sees the more hawkish Fed as the primary catalyst behind the selling. Investors will watch how corporate profits hold up in the face of rising interest rates and the prospect of a recession, she said.

Here are some notable developments of the week:

The week’s rout has erased almost $982 billion from the Nasdaq 100’s market valuation, as of its Thursday close, with Big Tech making up a large chunk of that hole. Microsoft Corp. erased about $120 billion in value, a decline that pushed its capitalization below $2 trillion. Amazon’s $48 billion drop was nearly enough to kick it out of the $1 trillion club altogether.

Perhaps most notably, the $200 billion wipeout at Apple was sizable enough for it to lose its title as the world’s most valuable company, dropping below Saudi Aramco for the first time since 2020.

The sector’s brutal selloff was only the latest example of investors rotating out of information tech and internet stocks. Amazon has dropped 4.1% this week, its seventh negative week in a row and longest losing streak since March 2008. Apple, which has tumbled 8.2%, is also on pace for a seventh straight weekly drop.

The iShares Expanded Tech-Software ETF is on track for a sixth straight negative week, the most since 2014. The Nasdaq 100 also is poised for its longest run of weekly drops in almost a decade.

Investors have soured on one-time pandemic winners, and some disappointing earnings results were only the latest excuse to further beat those stocks down.

Peloton Interactive Inc. collapsed 7% as analysts reduced their share price targets after the exercise-bike maker reported a deeper loss than predicted and cut its revenue guidance. Its shares have plunged from their peak in 2021. Coinbase Global Inc.’s weaker-than-expected first-quarter earnings report fueled a wider selloff with the crypto exchange down more than 70% this year, trading far below its first-day closing price of $328.28 from April 2021.

Upstart Holdings Inc., the cloud-based artificial intelligence lending platform that more than tripled over the course of 2021, slashed its forecast, sending shares down 60% for the week.

The selloff in crypto stocks deepened as Bitcoin fell near its lowest levels since December 2020. The digital currency is down about 11% this week, its sixth consecutive slump and longest streak since October 2014. Crypto companies have been pummeled over the last six months as Bitcoin’s price was cut in half amid a broader rout in global risk assets. A basket of 25 US-listed cryptocurrency-related stocks — which houses Block Inc., Coinbase Global and Robinhood Markets Inc. — has seen roughly $200 billion in market value erased.

Amid this rollercoaster ride, there were some bright spots in the Nasdaq 100. Electronic Arts Inc. was the best performer, gaining 4.9% after analysts were upbeat on the video-game retailer’s fourth-quarter results, which showed that earnings topped expectations. Comcast Corp. and Charter Communications Inc., which announced a streaming TV joint venture last month, are also on track for positive weeks.

Even if stocks do rally for the day Friday, the prolonged selloff may have longer to run. The Cboe NDX Volatility Index, which tracks a market estimate of future volatility, has jumped to the highest level since October 2020.