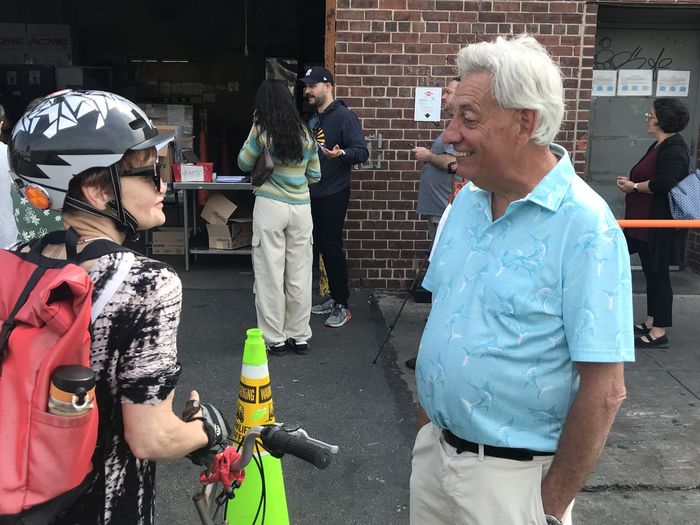 What does it take to work for the same business nearly a half-century? Read More...

Think of Gary Brownstein as the Pied Piper of lox. In his 47-year tenure at Acme Smoked Fish, the Brooklyn, N.Y., company that supplies the country with its namesake product, Brownstein held just about every job there is.

He sliced more than his share of salmon. He loaded trucks. And in his most public-facing role, he helped run Fish Friday, a once-a-week event when the company sells its products directly to consumers at steep discounts. In fact, he became especially known for Gary’s Special — dishes he created just for Fish Friday, such as smoked salmon in a sweet Thai chili sauce.

These days, you can still order Gary’s Special, but you won’t likely see Brownstein in action. He retired from Acme in May, concluding his nearly half-century run with a festive edition of Fish Friday. Many of the regular customers on hand were buying Gary’s Special-themed T-shirts made for the occasion.

On that day, MarketWatch caught up with the 69-year-old Brownstein, a member of the family that owns Acme, to hear about what finally prompted his departure. But just as important, we wanted to know what kept him working for so long at the same place. Naturally, family loyalty played a certain role in Brownstein’s case, but in an era when the median job tenure is 5.4 years, the fishmonger’s story as a company “lifer,” as he described himself, offers a lesson in perseverance — an anti-retirement lesson, if you will.

Here are six things we learned from Brownstein about what it takes to stay with one company through the many years.

You have to love the mission

Yes, Brownstein loves his lox. And his herring. And just about all the products that Acme offers. He talks about eating fish all the time — and he liked to find new ways to utilize it in recipes, as evidenced by his Gary’s Special. It may be stating the obvious, but if Brownstein didn’t have that connection to what Acme is all about, he said it might not have been as easy to enjoy the ride.

Be in a place where you can switch things up

Brownstein may have worked at the same company for 47 years, but he never held the same position for too long, as attested by his duties that indeed ranged from running the slicing department to working Fish Friday. “I loved the fact that it was never stagnant,” he said. He even retains a sense of humor about what may have been his toughest job: working the herring room, stacking barrel after barrel of fish.

Plus, on any given day, Brownstein could end up doing many things. And what was his title? “There were no titles. We just did what we were supposed to do,” he said.

It helps to work for a winner

Brownstein noted that many of Acme’s competitors went out of business over the last few decades. Meanwhile, Acme continued to grow: He said revenues increased in all but one of his 47 years with the company. Naturally, Acme benefited from the loss of competition, but the company also increased its business because of the way it innovated.

Brownstein was integral to that innovation: He helped Acme launch items ranging from a whitefish salad to a smoked salmon Hawaiian-inspired poke bowl. He also played an important role in helping Acme come up with different ways to package its products, which in turn played a large part in the company expanding its footprint in stores. The point, Brownstein said, is that being with a thriving business affords an opportunity for employees to thrive.

Much of Brownstein’s work involved being on his feet. He did more than his share of lifting and moving things — or bending down to fix a freezer. He said the labor sometimes took a toll on his body, but, in general, the physical aspect of the job gave him a certain edge. “You feel good,” he said.

It’s all about the people — and the perks

But don’t forget the perks, either. Brownstein certainly hasn’t. He recalled how he used to enjoy free knishes — a Jewish specialty of baked dough stuffed with potatoes or other ingredients — from a knish producer whose facility was near Acme (Acme would ship the company’s product). Similarly, a nearby bakery often supplied the Acme crew with free rye bread. When Brownstein recounts these little extras that came with life at Acme, he makes it clear they also contributed to his happiness at the company.

Know when it’s truly time to step down

For Brownstein, the decision to retire was very much tied to his wife’s passing last year. Aside from the obvious heartache it caused, he said it changed much of his routine and had him taking on household responsibilities he hadn’t before. “I was having a hard time doing that” while going to work, he said. Finally, he just knew instinctively he needed to step down. “I woke up (one day) and I was like, ‘It’s time.’”

Brownstein, a New Jersey resident, said his retirement will afford him more time to play golf, his favorite pastime. His immediate plan is to “take a year and figure it out,” he said of his new life. He also doesn’t rule out an occasional return visit to Acme, especially on Fish Friday. “They want me to come back all the time,” he said.