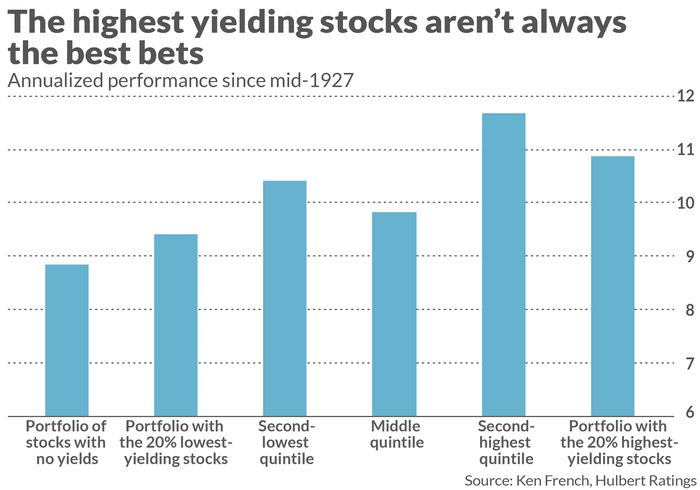 Long-term investors should focus on companies whose dividends are most likely to grow Read More...

When it comes to dividends, too much of a good thing is not wonderful.

That’s especially important information for retirees and near-retirees, many of whom are substituting dividend stocks for some of their bondholdings. Their natural instinct is to gravitate toward those stocks with the highest dividend yields.

They should resist that instinct, however. On average over the long term, the dividend-paying stocks that performed the best were those whose yields were significantly lower than those with the absolute highest yields.

The accompanying chart reports these portfolios’ annualized returns since 1927, courtesy of data from Dartmouth professor Ken French. Notice that the best return was produced by the second-highest yielding quintile of stocks—not the highest-yielding quintile.

To understand this counterintuitive result, you have to focus on dividends’ growth rate over the long term. A stock with a sky-high yield might look good now, but if its dividend doesn’t grow in coming years its contribution to your long-term return will be modest—or worse. Far better to pick a stock whose dividend is modest by current standards but which will grow faster over time.

There are many examples I could use to illustrate this point. Consider first Citigroup C, +0.73%, which was one of the highest-yielding stocks in the S&P 500 SPX, -0.42% before the global financial crisis. During calendar 2007, the company’s quarterly dividend was 54 cents a share, which translated to a 7.3% yield using the stock’s year-end-2007 price.

During the financial crisis, however, Citigroup cut its quarterly dividend to a penny and then, in 2009, eliminated it altogether. The company restored paying a penny dividend in 2011, after undergoing a 1-for-10 reverse split. Since then it has gradually increased its dividend, which it now stands at 51 cents a share. On a pre-split basis, however, Citigroup’s current dividend is less than 10% what it was in 2007; given where the company’s stock is trading, however, this translates to a 3.9% yield.

There are three aspects of the contrast between Citigroup and Procter & Gamble that are relevant to this discussion:

The bottom line? Dividend yield alone is an unreliable guide to constructing a dividend stock portfolio with the best expected return over the long term. You must also focus on dividend-paying stocks with the greatest likelihood of not only maintaining its dividend but increasing it over time.

With apologies to Mae West, too much of a good thing is not wonderful!