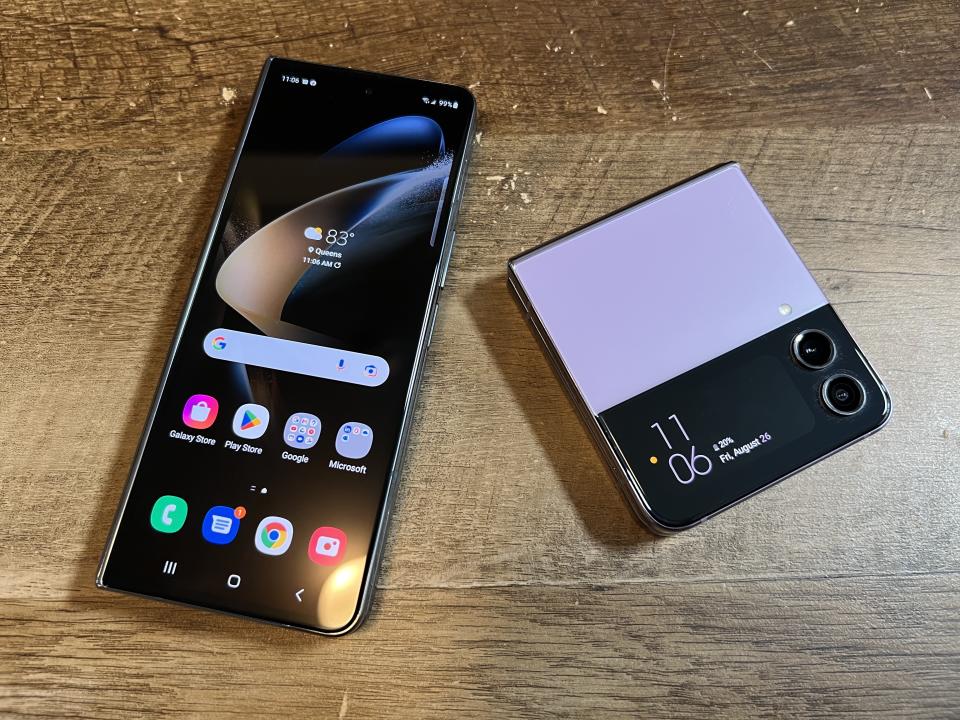 Samsung's foldable Galaxy Z Fold4 and Galaxy Z Flip4 are perfect for the person who wants cutting-edge tech or, in the case of the Fold4, a giant screen. Other's Read More...

Samsung’s fourth generation of foldable phones hits the market Friday, and they bring a number of improvements that could up the ante and justify their relatively high entry-level prices.

The Android (GOOG, GOOGL)-powered Samsung Galaxy Z Flip4 and the Galaxy Z Fold4 start at $999, the same price as high-end phones like the Galaxy S22+, and $1,799, respectively, and sport improved software and cameras, not to mention larger batteries. What’s more, the Fold4 gets enhanced multitasking capabilities with a new PC-like Taskbar feature. Traditional smartphones offer basic multitasking capabilities, but nothing like what the Fold4 can do.

But foldables are still relatively niche devices compared to more popular flat-screen smartphones. They also come with their own unique tradeoffs, especially the Flip4 which you’ll need to unfold to use as a fully functional phone.

If you’re the type of person who loves cutting-edge tech, or in the case of the Fold4, a massive screen, these might be the phones for you. But if you’re looking to save some cash, or just want a phone that you don’t need to unfold, you might want to stick to Samsung’s flat-screen offerings.

You’d be hard pressed to differentiate the Fold4 and Flip4 from the Fold3 and Flip3. The Fold4 is built like a book, while the Flip4 is more like a makeup compact. The Fold4 packs a 6.2-inch cover display that allows you to interact with the majority of the phone’s features.

Open up the Fold4 and you’ll get a tablet-like 7.6-inch screen. In total, you can run three apps on the screen at the same time, with one larger app taking up one side of the screen and two smaller apps stacked on top of each other.

When you open an app, the Fold4’s Taskbar will pop up, offering a series of apps at the bottom of the screen that you can drag onto the main part of the display. Your most recently used apps will also show up in the Taskbar, making it easy to bounce back and forth between them.

Of course, the unfolded screen can be a tad hard to handle if you’re trying to reach items at the center of the screen with your thumb and don’t have hands the size of dinner plates.

The Z Flip4, for its part, has a 1.9-inch cover screen that lets you see notifications, check things like the weather, control your music, and look at your schedule. You can also use the petite display to activate the Flip4’s cameras to take selfies. It works in a pinch, but it’s not the best choice if you want to get that perfect high-angle selfie shot since the screen is tiny.

The Flip4’s big software trick is Flex Mode, though the feature is also available on the Fold4. It allows you to fold your phone and automatically separates the display into two halves. If you’re using the camera, for instance, the top half will serve as the viewfinder, while the bottom half gives you controls like the camera mode you want to use and more.

But not all apps get the special controls, and videos look too small for my liking.

Where the Z Fold4 falls on its face is its under display selfie camera. Samsung says it tried to improve image quality for shots taken with the camera, but woof. Images are rough, and nowhere near as good as those taken on other high-end smartphones, or even the Z Flip4.

For its part, the Flip4 offers a dual lens rear camera setup with ultra-wide and wide-angle options.

Photos taken with both phones’ rear cameras look every bit as fantastic, as you’d expect from Samsung phones. But at $999, you’d think the Z Flip4 would get a triple camera setup, as well.

As for battery life and performance, I managed to use both phones throughout my workday, capturing photos and playing games…er, I mean working, without ever fearing they’d call it quits before I reached my bedside charger at night.

Slowdown, meanwhile, was absent thanks to the phones’ Qualcomm (QCOM) Snapdragon 8+ Gen1 chips, which powered them through everything from videos and multitasking to games.

Are they for you?

Samsung has come a long way since its first foldable devices, making them not just sturdier and water resistant, but packing in more capabilities as well. But they’re still not for everyone.

The Z Flip4 is fun thanks to its unique look, but having to unfold your phone to take full advantage of it can be a pain. As for the Z Fold4, while I loved having a massive screen when it was open, it often felt too large and unwieldy.

For the average consumer, these phones are interesting, but hard to recommend. But if you’ve got the cash to burn and are looking for something that offers a unique take on the smartphone formula, these handsets are worth checking out.