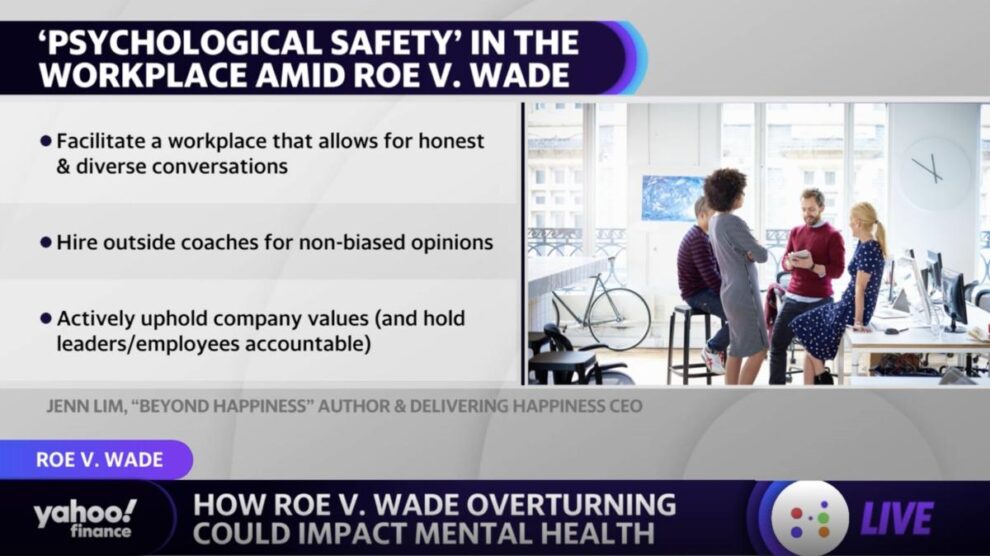 Yahoo Finance reporter Allie Canal joins the Live show to examine which companies are offering more mental health resources and benefits to employees after the Roe v. Wade decision, and how workplaces can be "psychologically safe". Read More... 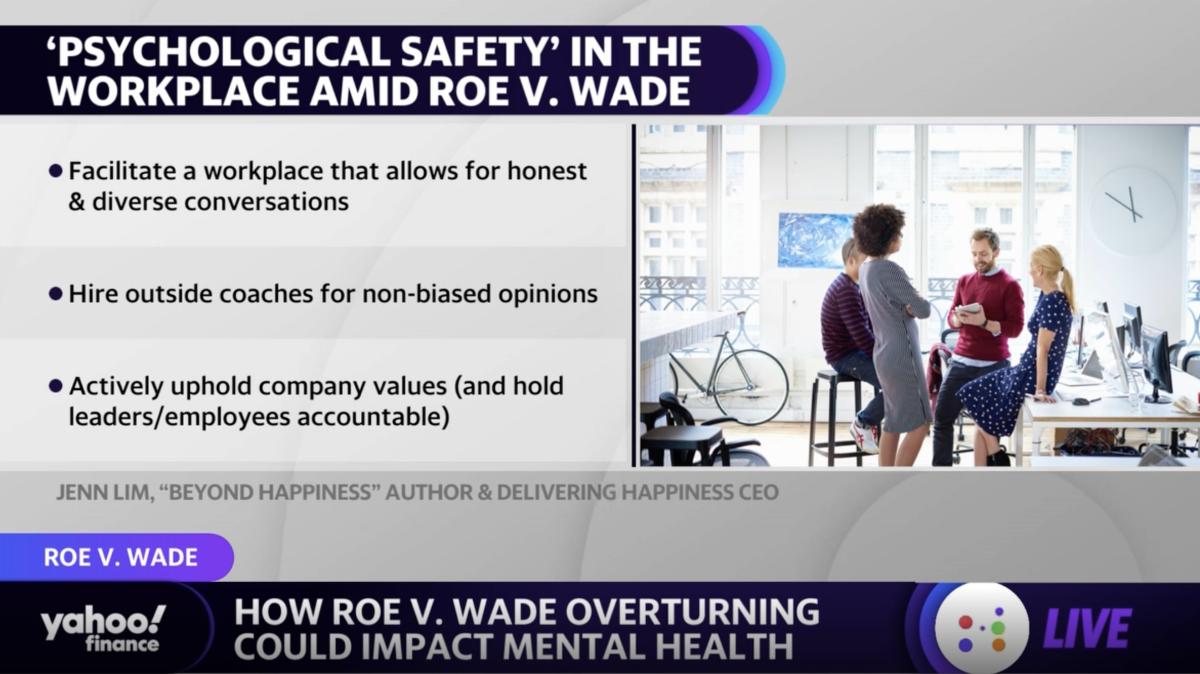 Yahoo Finance reporter Allie Canal joins the Live show to examine which companies are offering more mental health resources and benefits to employees after the Roe v. Wade decision, and how workplaces can be “psychologically safe”.

SEANA SMITH: Well, in the wake of overturning the Roe v. Wade, psychologists are warning that the decision will exacerbate the mental health crisis here in this country. Alexandra Canal is following this story for us. And Allie, we’ve heard a number of companies come out, saying how they are going to help their employees get access to abortion if they live in one of these states, where it is no longer legal to do so. But what else are we hearing from companies when it comes to mental health and the role that they could play there?

ALEXANDRA CANAL: And that was a big question I had, Seana, because a lot of these companies, Netflix, Apple, Tesla, all they all said they would reimburse travel. Target came out this morning, saying the same thing.

But what happens after, especially as it relates to mental health? Because the American Psychological Association did say that overturning Roe v. Wade would, quote, as you mentioned, “exacerbate” the mental health crisis that America is already experiencing. They cited several decades of scientific research that shows that those that are denied abortions, they have lower levels of self-esteem, lower quality of life, higher stress, higher anxiety, compared to those who are able to safely access the procedure.

So I had the chance to speak with workplace happiness expert, Jenn Lim. And she told me that it’s important that these companies create a culture of psychological safety. So what exactly does that mean? It means that leaders today need to facilitate a workplace that allows for honest, diverse conversations with managers and coworkers. They need to hire outside coaches for non-biased opinions, especially if workers feel a bit uncomfortable going to their co-workers or managers with such personal information.

And they also need to actively uphold these company values and hold everyone accountable to them. So that means calling things out when it’s not being done, celebrating it when it is. So really being active. Because she told me that it’s really easy for these companies to just release a PR sound bite when something like this happens. But you need to have actionable steps forward.

So I did reach out to a lot of the companies that came out on Friday to see what their plans were for mental health. A lot of these companies actually already had mental health initiatives in place. So we can take a look at Netflix, Warner Brothers Discovery, Lyft. They all told me that they really offer a wide range of services, access to mental health programs, free therapy sessions, paid time off, as well as extra recharge days to really encourage these employees to take time off of work, recharge their mind, recharge their mental health. But I do think there is more that needs to be done, especially in the wake of a decision like this.

RACHELLE AKUFFO: And Allie, do we know how widespread some of these offerings are? Obviously, you were mentioning some of the biggest names in the industry, your Netflixes. But what about some of these other smaller companies? Do we know what sort of resources they’re perhaps offering?

ALEXANDRA CANAL: There are a variety of services out there. And there’s a lot of companies that these smaller firms and bigger firms can partner with, especially when you want to access therapy or even meditation apps, things like that. But I think the key here is for leaders to be open and honest and express what they plan to do moving forward.

That was a really big point that Jenn Lim told me. She said it’s not enough to just have these conversations, to just put out these consumer surveys or company surveys and ask what you want. You need to listen. You need to reiterate what they said to you. And then you move forward from there. So I just think there needs to be more transparency in the workplace. And that starts from the top.

DAVE BRIGGS: If there’s any positive from COVID, it’s that these companies should have already–

DAVE BRIGGS: –done a lot of work on mental health and they say should be prepared–

ALEXANDRA CANAL: So much anxiety–

DAVE BRIGGS: –for that.

ALEXANDRA CANAL: –over COVID. And I even noticed with our company, they were offering a lot more services, a lot more options, if you were going through a difficult time during COVID. And a lot of people were. So it started here. But this is not going to be the only controversial decision.