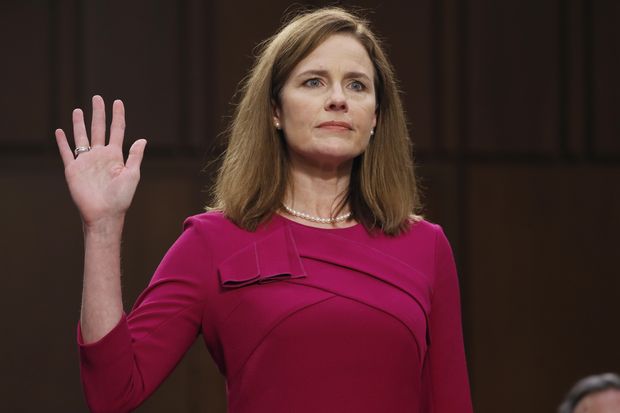 The Senate Judiciary Committee voted to approve Judge Amy Coney Barrett's nomination to the Supreme Court, overcoming a decision by Democrats to boycott the vote, setting the stage for the full Senate to vote on her confirmation on Monday. Read More...

The Senate Judiciary Committee voted to approve Judge Amy Coney Barrett’s nomination to the Supreme Court, overcoming a decision by Democrats to boycott the vote, setting the stage for the full Senate to vote on her confirmation on Monday.

Democrats did not attend the hearing, instead placing in their seats cardboard cutouts of constituents they say will lose their healthcare if the Supreme Court rules that the Affordable Care Act is unconstitutional.

“We are not going to allow them to take over the committee,” said Senate Judiciary Committee Chairman Lindsey Graham, a South Carolina Republican, of the Democratic decision to boycott. “They made a choice not to participate.”

In a case to be heard by the Supreme Court on Nov. 10, California v. Texas, Republican states attorneys general and governors are arguing that the law should be overturned, and with it popular provisions like those requiring health insurance companies to cover Americans with preexisting conditions. The Trump Administration has declined to defend the law in court. Democrats say Barrett will be a vote to overturn the law, while Republicans argue one cannot predict how she’ll vote.

Nevertheless, the 12-10 Republican majority on the committee was sufficient for the GOP to overcome the boycott and advance Barrett’s nomination to the full Senate.

Senate Majority Leader Mitch McConnell, a Kentucky Republican, has said that he has the votes in the full Senate to confirm Judge Barrett’s nomination to the Supreme Court, though at least one Republican Senator, Susan Collins of Maine, has said she’ll vote against the nomination because she thinks the winner of the presidential election should choose the next nominee.

Sen. Lisa Murkowski, Republican from Alaska, has not yet said how she’ll vote on the nomination, while Sen. Mitt Romney, a Utah Republican who has broken with party leadership in past votes, has said he will vote to confirm.

With 53 Republicans Senators, four would have to vote against the nomination for it to fail, as Vice President Mike Pence would cast the decisive vote should there be a 50-50 tie.

The Senate will continue to debate the nomination over the weekend, as according to Senate rules Sunday is the earliest day it can vote for cloture on the measure, likely paving the way for Barrett’s accession to the Supreme Court Monday.