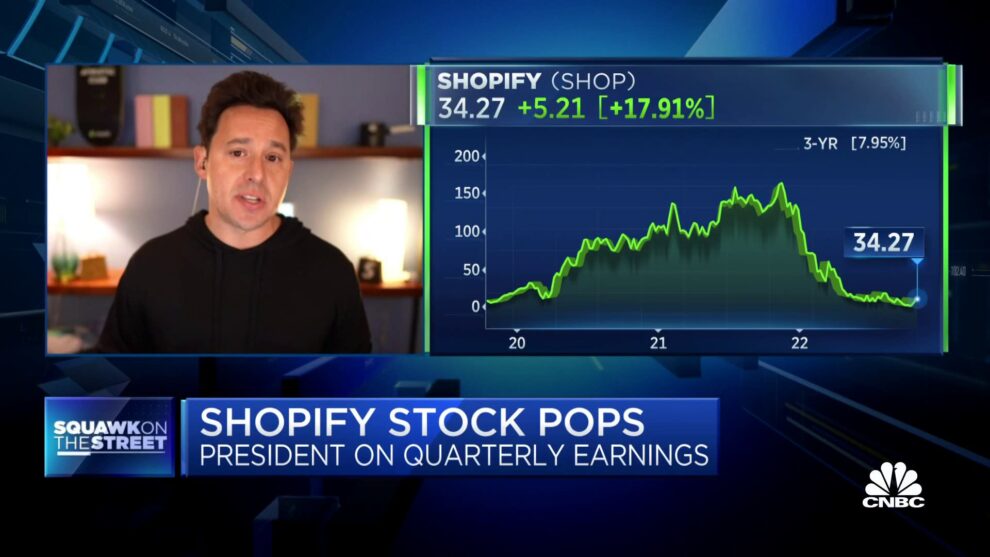 Shopify reported earnings before the opening bell. Here are the results. Read more...

Shares of Shopify jumped 17% after the e-commerce company reported a narrower-than-expected loss for the third quarter and revenue that beat Wall Street’s estimates.

Revenue was up 22% from the same quarter last year, but Shopify said the strong U.S. dollar weighed on its sales.

Last quarter, Shopify said 2022 will be “more of a transition year, in which ecommerce has largely reset to the pre-Covid trend line and is now pressured by persistent high inflation.” The company saw booming growth during the coronavirus pandemic, when its stock hit new highs, as retailers sought out its services to sell products online.

Shopify forecast that its operating expense growth rate will “sequentially decelerate” in the current fourth quarter relative to the third quarter.

“I think what’s being missed is Shopify is a great reopening story. If you look at Shopify point of sale, physical retail of GMV [gross merchandise volume], it was up 35% year on year,” Harley Finkelstein, Shopify’s president, told CNBC’s “Squawk on the Street” on Thursday. “We’re taking a lot of share away from the traditional point of sale physical retail commerce platform and they’re coming to us as well. So I think our job now is to explain to the world, to investors, to everyone that Shopify is the future of commerce wherever that happens.”

This was the first quarter to include the results from the company’s acquisition of Deliverr, an e-commerce shipping company.

“In Q3, we delivered another solid quarter of GMV, revenue, and gross profit dollar growth against the high inflationary environment. From an operational perspective, we recalibrated our organizational structure, successfully rolled out a new compensation framework, and began integrating Deliverr into Shopify,” Amy Shapero, Shopify’s CFO, said in the company’s earnings release.

Shopify shares are down nearly 75% year to date. In July, the company announced it would lay off about 10% of its staff.