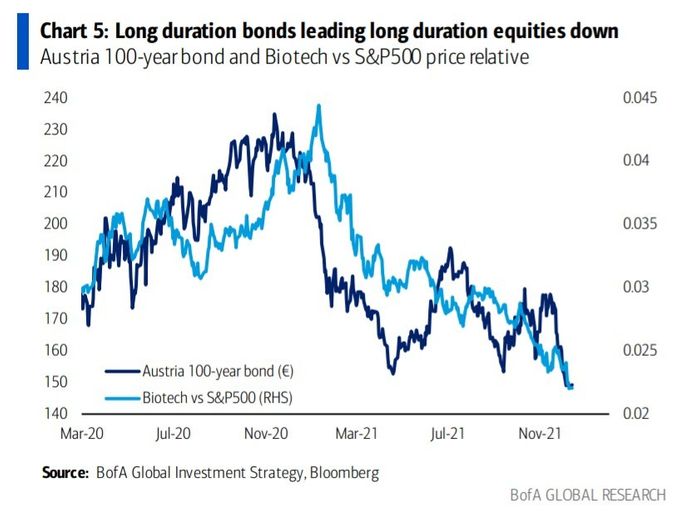 It's time to bet against the winners from the Federal Reserve's unprecedented easing, a top Bank of America strategist. Read More...

It’s time to bet against the winners from the Federal Reserve’s unprecedented monetary easing during the pandemic, a top Bank of America strategist.

Michael Hartnett, chief investment strategist at Bank of America, said the Fed will be very hawkish the next nine months after inflation soared, reaching 7% in December.

That means, “short the winners of Fed’s liquidity supernova…tech, IG, private equity.” The Fed has taken its balance sheet to nearly $9 trillion, and other central banks, as a percentage of their GDP, have been even more aggressive.

Investors already have started to punish the winners from low interest rates. The Nasdaq Composite COMP, -2.51% retreated 2.5% on Thursday after officials including Fed Gov. Christopher Waller discussed making as many as five increases in 2022. The ARK Innovation ETF ARKK, -5.42%, a proxy for futuristic but largely unprofitable companies, has dropped 47% from its February highs.

Investment-grade bonds, and private-equity, are less talked about during the current worries over likely Fed interest rate hikes this year.

The iShares iBoxx $ Investment Grade Corporate Bond ETF LQD, +0.32% has slipped 2% this year and is down 5% from its August highs.

The Invesco Global Listed Private Equity ETF PSP, -1.81% has dropped 2% this year and 9% from its highs in November.

Hartnett said the interest rate shock will be global this year. The G7 unemployment rate is near a 40-year low of 4.5%, and the price of the Austrian 100-year bond has tumbled.

In terms of what he recommends on the long side, Hartnett said high quality, defensive stocks should benefit on tighter financial conditions; oil, energy, and other so-called real assets should gain due to inflation; European and emerging market banks may do well as economies recover; and distressed Asian credit may offer opportunities.

One other note he made was that the U.S. dollar DXY, +0.06% was fading despite increasingly hawkish Fed monetary policy. He said that’s because global investors are losing their faith in the U.S. recovery. Rising yields and a weak dollar is reminiscent of the 1970s, when cash and commodities outperformed stocks and bonds, which is what we’re seeing in 2022, he said.