(Bloomberg) -- U.S. futures were mixed on Friday as a warning from Snap Inc. weighed on social-media giants at the end of a week dominated by earnings reports and inflation worries.Most Read from BloombergThe Top Money Maker at Deutsche Bank Reaps Billions From SingaporeForget Palm Springs—Santa Fe Is the New Mecca for Modern ArchitectureCities' Answer to Sprawl? Go Wild.Why Americans and Britons Are Rushing to Buy Idyllic Homes in ItalyGoogle’s Biggest Moonshot Is Its Search for a Carbon-Free F Read More...
List: The Top 50 Dividend Stocks 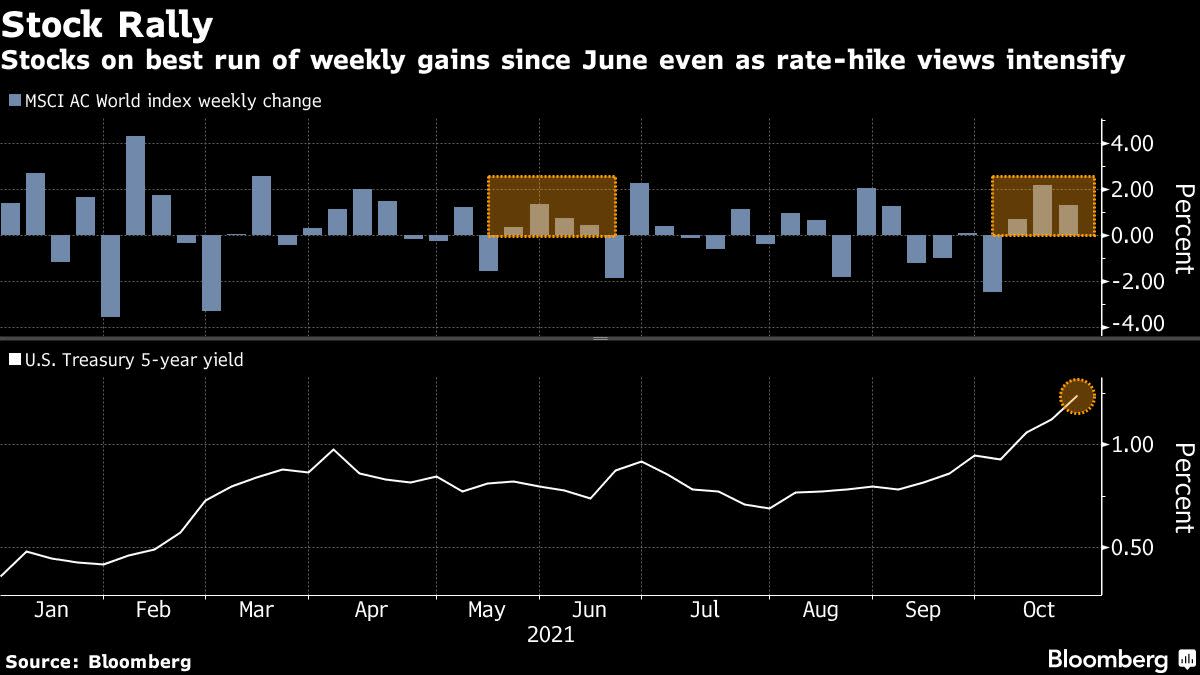 (Bloomberg) — U.S. futures were mixed on Friday as a warning from Snap Inc. weighed on social-media giants at the end of a week dominated by earnings reports and inflation worries.

Contracts on the S&P 500 were little changed and those on the Nasdaq 100 futures retreated. The parent company of Snapchat tumbled as much as 22% in pre-market trading after it sounded a cautious note on advertising spending. Shares of Facebook Inc., Google-owner Alphabet Inc. and Twitter Inc. also slid. Intel Corp. plunged more than 10% following a disappointing third-quarter update.

Stocks in Europe rose after China Evergrande Group pulled back from the brink of a default, easing concerns about contagion from the property developer’s woes. Consumer stocks led the advance in the Stoxx Europe 600 index, which headed for a third week of gains with cosmetics maker L’Oreal SA jumping more than 6% after reporting a third-quarter earnings beat. On the downside, French carmaker Renault SA and London Stock Exchange Group Plc were the latest companies to report supply-chain challenges.

The 10-year U.S. Treasury yield fell below 1.70% but remains higher for the week. The dollar edged lower, on track for a second week of declines. The Federal Reserve is nearing a reduction in bond purchases and traders are ramping up bets on rate hikes to quell price pressures. Market-implied expectations for inflation have hit multiyear highs.

Global stocks are set for a third weekly advance, helped by the ongoing global recovery from the health crisis. The rally is being shadowed by the prospect of a faster-than-expected tightening of monetary policy to curb inflation, which is being stoked by an energy crunch and creaking supply chains.

“Now, as central banks face their next big challenge – faster-than-expected inflation – the question is, what will the fallout be from tighter monetary policy?” said Siobhan Redford, an analyst at FirsRand Bank Ltd. in Johannesburg. “A number of factors need to be finely balanced by policy makers when considering their next moves as the wrong ones could have devastating economic outcomes.”

Elsewhere, crude oil gained, and Bitcoin hovered around $63,000 after slipping back from its recent record. Russia’s ruble surged after the country’s central bank raised borrowing costs by more than economists’ expectations.

Events to watch this week: