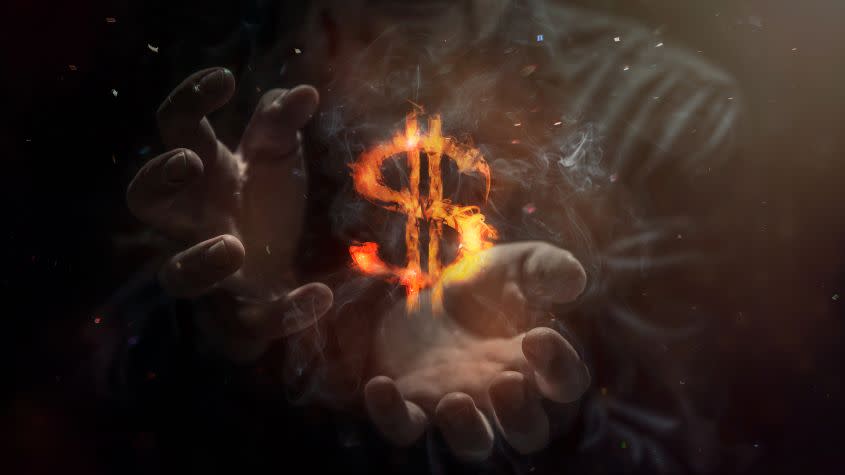 The latest inflation data showed prices continued to rise at an accelerated clip in June, which sparked a volatile session on Wall Street. Read More...

Another red-hot reading on inflation sparked a volatile session for stocks on Wednesday. Specifically, data released from the Labor Department this morning showed the consumer price index (CPI) jumped 1.3% month-over-month in June. On an annualized basis, consumer prices were up 9.1% – outpacing May’s 8.6% spike and marking the fastest year-over-year (YoY) rise since November 1981.

Higher prices were seen across all items the index tracks, though food (+10.4% YoY) and energy (+41.6%) saw the biggest increases. Excluding those two segments, core CPI was up 5.9% annually, slightly less than May’s 6% YoY rise.

“Clearly we’re not out of the inflation woods yet,” says Mike Loewengart, managing director of investment strategy at E*Trade. “That it came in above an already very high estimate shows just how tricky the situation is – and our challenges spread far beyond oil, which is one of the few consumer goods to abate somewhat recently.”

Loewengart believes another 75 basis-point rate hike (a basis point is one-one hundredth of a percentage point) is a “foregone conclusion” at the Fed’s late-July policy meeting, and expects a “bumpy ride in the market” going forward.

Sign up for Kiplinger’s FREE Investing Weekly e-letter for stock, ETF and mutual fund recommendations, and other investing advice.

A bumpy ride is certainly what investors saw today, with stocks selling off sharply in the immediate wake of the CPI release. The main market benchmarks managed to come off those lows – and even spent some time in positive territory. By the close, though, the Nasdaq Composite was down 0.2% at 11,247, the S&P 500 Index was 0.5% lower at 3,801 and the Dow Jones Industrial Average was off 0.7% at 30,772.

Next up: the start of second-quarter earnings season, which is “the most important indication for the economy over the next few weeks,” says Gargi Chaudhuri, head of iShares Investment Strategy, Americas. “We will be watching to see whether companies are still able to keep pushing higher prices to their consumers, and which sectors are significantly revising down their earnings forecast for the future.”

Other news in the stock market today:

There are just hours left in this year’s Amazon Prime Day, but there are still plenty of steals to be found. These include substantial discounts for smart home devices, karaoke machines and Nerf guns, but the biggest Amazon Prime Day deal just might be AMZN stock.

Shares in the consumer discretionary name have been hit this year amid a broader selloff in growth stocks, and that has them trading at a deeply discounted valuation. Additionally, the recent Amazon stock split brought the share price down to around $111 from north of $2,000 – a much more manageable sum for the average retail investor.

No, the drawdown has been no fun, but it has put AMZN on sale, and analysts are wholeheartedly bullish on both the stock and the company’s prospects. Amazon’s “maniacal focus on the customer and its leveraging of technology innovation to disrupt commerce, entertainment and IT services, to be strong differentiators and sustainable competitive advantages,” says Truist Securities analyst Youssef Squali (Buy). And this, the analyst believes, will help AMZN “grow disproprotionately faster than peers, gain market share in several segments of the global economy and sustain above-peers valuation multiples for years to come.”

Read on as we explore why investors could score the best Amazon Prime Day bargain yet.

Karee Venema was long AMZN as of this writing.

21 Best and Worst Things to Buy at Aldi

Your Guide to Roth Conversions