(Bloomberg) -- Stock splits are back in vogue among big U.S. companies, reviving a debate about whether the practice that had fallen out of favor for years is worth the fuss.Last week, Nvidia Corp. became the eighth company in the S&P 500 Index to announce a split in the past year, joining big names like Apple Inc. and Tesla Inc. That’s the most over a comparable period in six years, according to data compiled by Bloomberg.The surge in splits comes amid a rally that’s pushed share prices of almost 600 stocks in the Russell 3000 Index above $100. Yet that has done little to settle the age-old-argument among investors about whether such stock-price engineering has any bearing on performance. In fact, recent developments such as soaring retail trading and fractional share ownership have only heated things up.“Arithmetically, there’s no merit to the notion that stock splits work,” said Mark Lehmann, chief executive officer of JMP Securities LLC. “But there is an optical hesitancy for certain stocks at certain prices and there is a segment of the investing public where that will never change.”The primary motivation cited by companies doing splits is simple: to make each share cheaper to buy. Nvidia, whose share price has more than quadrupled since the start of 2019 to reach almost $650, said in a statement announcing its 4-for-1 stock-split plan that its aim was to “make stock ownership more accessible to investors and employees.” A representative for the chipmaker declined to comment further.Once a reliable hallmark of bull-market exuberance, the practice had until recently fallen out of favor. In 2006 and 2007, when stocks were again setting records, there were 47 splits in the S&P 500. Three companies -- Nvidia, Paccar Inc. and Cummins Inc. -- even split twice. In 2019, there were only two.For Julian Emanuel, chief equity and derivatives strategist at BTIG, it’s harder to make the case for splitting a stock these days because of the rise of commission-free trading and brokerages offering fractional shares. Those developments “have largely rendered irrelevant the dollar value of a company’s share price,” he said in an interview.Brokerages like Robinhood now let investors buy a slice of a share for as little as $1 rather than forking over, say, more than $2,300 for a single share of Google-parent Alphabet Inc.Limited Benefits A look at the data backs up the case against splits providing long-term benefits to stock performance. The shares of companies that have split outperformed the S&P 500 on average in four of the last five years in the year the split was announced, according to Bloomberg data. The calendar year following the move, however, those same shares underperformed four of the five years.The recent rash of stock splits has sparked speculation that other large technology companies like Amazon.com Inc. that boast four-digit share prices may be next. Amazon split its stock three times in 1998 and 1999 and hasn’t done one since. Shares of the e-commerce giant trade around $3,200 and have gained more than... 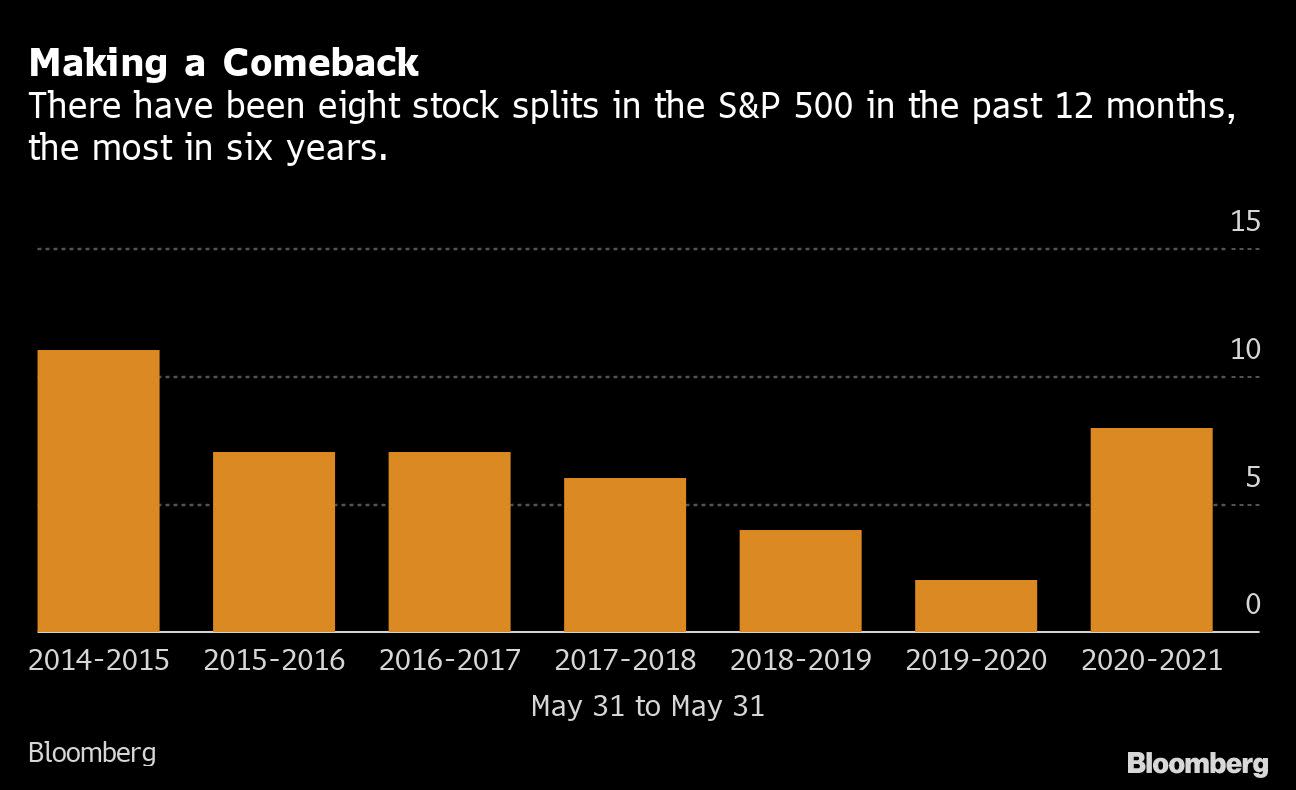 Top Marijuana Stocks for June 2021
Outside the Box: Inflation in drug prices is soaring and it’s time to break Big Pharma’s grip on our health
Comment

Market Extra: How a cash shortage forced the Fed to stem a surge in rates in a vital area on Wall Street funding