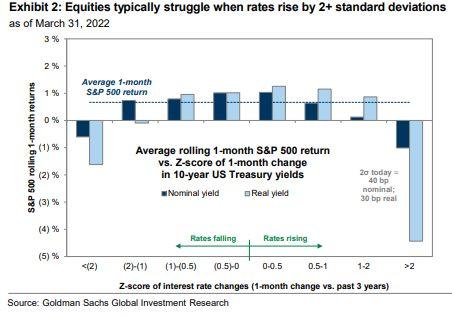 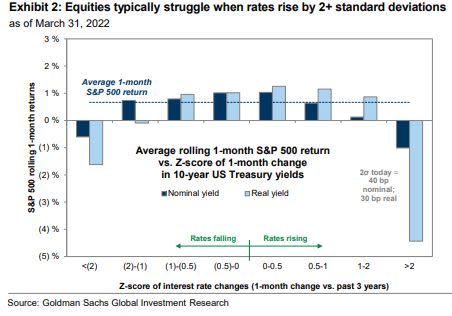 (Bloomberg) — A week that began brimming with economic optimism ended up caving in on stock bulls, who find themselves increasingly helpless in the face of determined Federal Reserve inflation fighters.

It was a stretch that may be remembered as the time bond investors reestablished themselves as rulers of the asset-market roost. Surging yields, whipped up by a belief Jerome Powell’s central bank will enact four half-point rate hikes by September, sent the S&P 500 to a third straight down week, only the second such stretch in 18 months.

Hawkish pronouncements by Jerome Powell’s Fed have set the table for a half-point hike at the central bank’s May meeting, with chances for three more now priced into money markets. Rates on 10-year Treasuries have jumped by more than 50 basis points this month to 2.9%, a rate of increase that Goldman Sachs strategists say usually causes distress in stocks.

Neither buoyant economic data, from housing to consumer spending, nor rising earnings estimates could stanch the losses, a possible sign of capitulation by equity investors who have resisted dire signals from bonds for months.

“It looks like equity markets have to get a little bit of a shock and come to the realization that the credit markets were by-and-large already telling us,” said Shawn Cruz, head trading strategist at TD Ameritrade.

Ironically, the cross-asset slump may be welcome news to a Fed hell-bent on tightening financial conditions, which have actually loosened since the central bank’s March rate hike. The gauge — which measures stress across equity and fixed-income markets — has started to narrow in the past week.

Within the equity market, internet firms, super sensitive to interest-rate changes, were the biggest losers, falling nearly 8% for the week. Non-profitable tech companies, meanwhile, lost 11% for the worst drop in more than four months.

While the run of losses shows Fed hawkishness starting to bite, the damage remains but a flesh wound when considered next to most measures of valuation — a sign that could signal more losses to come. At 22-times earnings and almost 3 times sales, the S&P 500 is still valued at about 60% more than U.S. gross domestic product, higher than any time before the pandemic.

Improving economic data, which this week included higher-than-forecast new home starts and strong credit-card data from banks, have occasionally pierced the Fed-fomented gloom in recent weeks, but rarely for more than a day. The S&P 500 has now jumped above and below its 200-day moving average more than 10 different times this year alone.

“That is some real volatility,” Chris Gaffney, president of world markets at TIAA Bank, said by phone. “Investors are looking at central banks that are aggressively raising interest rates, a war that increases the price in commodities, a big spike in the price of commodities, and maybe the return of Covid with China seeing that big spike in cases — there’s a lot going on.”

Among central bank officials, St. Louis Fed President James Bullard fired this week’s loudest salvo, calling for a 75-basis point hikes, while even relative doves such as San Francisco’s Mary Daly have said that a “couple” half-point increases are probable. That mirrors the tone from the top — Fed chief Jerome Powell road-mapped his most aggressive approach yet to controlling inflation, on Thursday solidifying expectations for a 50-basis point raise in a few weeks’ time.

The repricing across asset classes was swift. Traders are bracing for more than 200 basis points of tightening by year-end, with some hedges emerging for a supersized 75-basis point hike. Treasury yields have screamed higher in the aftermath.

The bond selloff briefly took so-called 10-year real yields — which strip out inflation — into positive territory for the first time since 2020. As a result, the most richly valued corners of the equity market absorbed the brunt of the selling. The Nasdaq 100 also closed out a third consecutive week of losses and is on pace for its worst month since 2008. Meanwhile, the ARK Innovation exchange-traded fund (ticker ARKK) plunged by 11%.

Goldman Sachs’s David Kostin found that S&P 500 returns tend to be negative when rates rise by more than two standard deviations in a month, something that has happened recently, and the weakness is “particularly pronounced” when driven by real rates. “We remain cautious of S&P 500 returns in the near term,” wrote the strategist in a note earlier this month.

Max Gokhman, chief investment officer for AlphaTrAI, says it’s not just commentary from Fed officials that led to the stocks selloff — it’s also that investor “darlings are getting decimated.”

Shares of Netflix Inc. declined this week after the company posted a surprise loss of subscribers. And both the Fed and Netflix are, in a way, realizing their old playbooks no longer work in the new regime, said Gokhman.

“The Fed is understanding that it has to assert its dominance over inflation, even if that alienates its investor ‘friends,’” he said. “Netflix is grasping that letting a third of your users get the service for free doesn’t work when you run out of global middle-class consumers willing to pay for binge-watching increasingly mediocre content you spent billions shooting.”

Anastasia Amoroso, chief investment strategist at iCapital, says that with an economic slowdown likely to limit any stock gains this year, investors need to search for alternatives. The floating rates of private credit look like a compelling option, and “yields from public fixed income are (thankfully and finally) looking attractive,” she wrote in a note.