(Bloomberg) -- European stocks and U.S. futures were steady Monday as traders weighed inflation concerns, rising Covid-19 risks and China’s outlook at the start of a week packed with big-tech earnings reports. Turkey’s lira slumped to a record low amid a diplomatic row.Most Read from BloombergCities' Answer to Sprawl? Go Wild.Hamburg Is at the Heart of Germany’s Growing Dilemma Over ChinaWhy Americans and Britons Are Rushing to Buy Idyllic Homes in ItalyOne of California’s Wealthiest Counties Co Read More...
List: The Top 50 Dividend Stocks 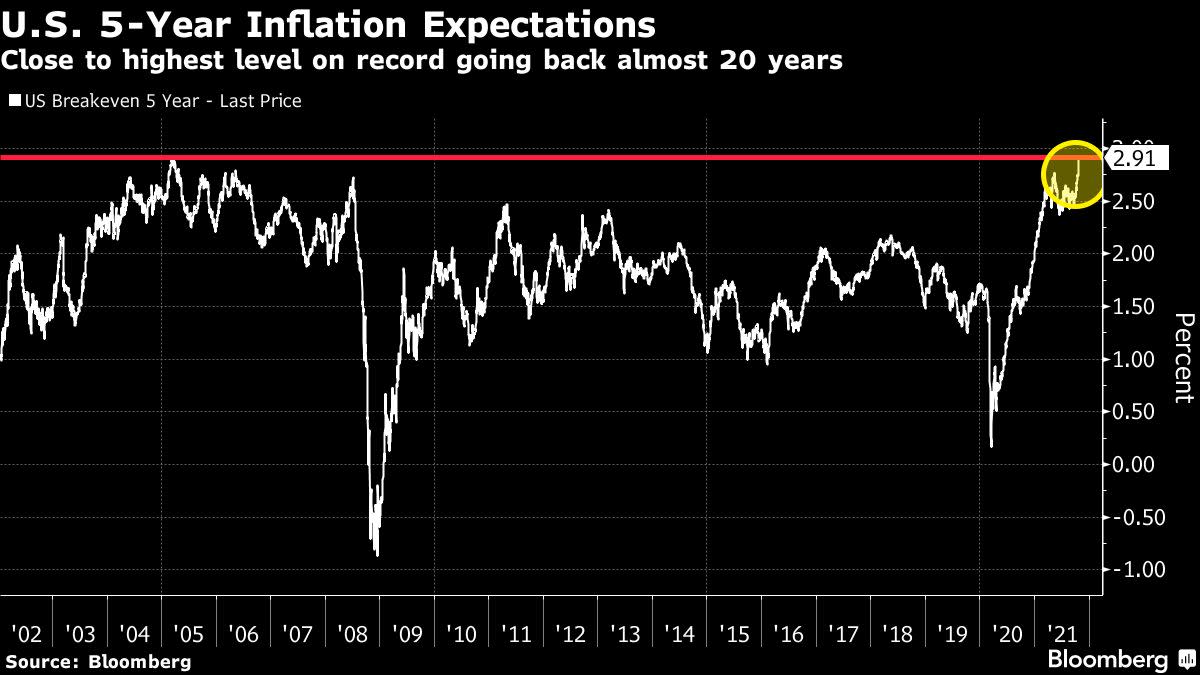 (Bloomberg) — European stocks and U.S. futures were steady Monday as traders weighed inflation concerns, rising Covid-19 risks and China’s outlook at the start of a week packed with big-tech earnings reports. Turkey’s lira slumped to a record low amid a diplomatic row.

The Stoxx Europe 600 index was little changed. The basic resources and energy sectors advanced as crude oil and metals extended gains. Telecoms and consumer stocks were the biggest losers. Futures on the Nasdaq 100 edged higher, while contracts on the S&P 500 were flat.

Equities dipped in Japan and were mixed in China, where the central bank boosted a daily liquidity injection and officials expanded a property-tax trial. Signs that it would take at least five years before authorities impose any nationwide property tax bolstered some industrial metals.

The 10-year U.S. Treasury yield rose and the dollar slipped against a basket of major peers. Federal Reserve Chair Jerome Powell on Friday flagged inflation could stay higher for longer. He made clear the Fed will soon start tapering bond purchases but stay patient on rate hikes.

Global equities have remained resilient despite risks from price pressures stoked by supply-chain bottlenecks and higher energy costs. Treasury Secretary Janet Yellen is among those counseling the inflation situation reflects temporary pain that will ease in the second half of 2022. Investors are wary that tighter monetary policy to keep inflation in check will stir volatility.

The Fed is becoming more hawkish as it responds to inflationary pressures “so we can expect more rate hikes than the market is pricing right now,” Rajeev de Mello, Deep Learning Investments managing director, said on Bloomberg Television. “There is the worry that faster tapering or a more hawkish Fed will create the risk of a slowdown.”

Traders are also monitoring an outbreak of the delta virus strain in China that is expected to worsen. The nation sought to allay concerns about the economy’s slowdown with a lengthy state media commentary outlining how the government is managing risks and remains confident about achieving its targets for the year.

“This new Covid cluster probably will mean that retail sales are going to be a little weaker heading into the year-end,” Julia Wang, a global market strategist at JPMorgan Private Bank, said on Bloomberg Television. “Having said that, the overall impact should be quite short-lived, because we can see that the authorities are generally getting better with testing, tracing and containing these clusters.”

In the U.S., the five largest technology companies are set to report earnings in coming days, started with Facebook Inc. on Monday. Meanwhile, the European Central Bank’s meeting this week will be closely watched for guidance on its pandemic bond-buying program.

Gold advanced toward $1,800 an ounce and crude oil extended a rally. Saudi Arabia said that the OPEC+ alliance should maintain its cautious approach to managing global crude supplies given the threat to demand still posed by the pandemic. Bitcoin held above $62,000.

Elsewhere, the lira fell after Turkey’s President Recep Tayyip Erdogan warned that 10 ambassadors, including those from the U.S., Germany and France, were no longer welcome after they had demanded the release of a businessman and philanthropist. The Turkish currency was already under pressure after last week’s larger-than-expected rate cut.

Here are some events to watch this week: