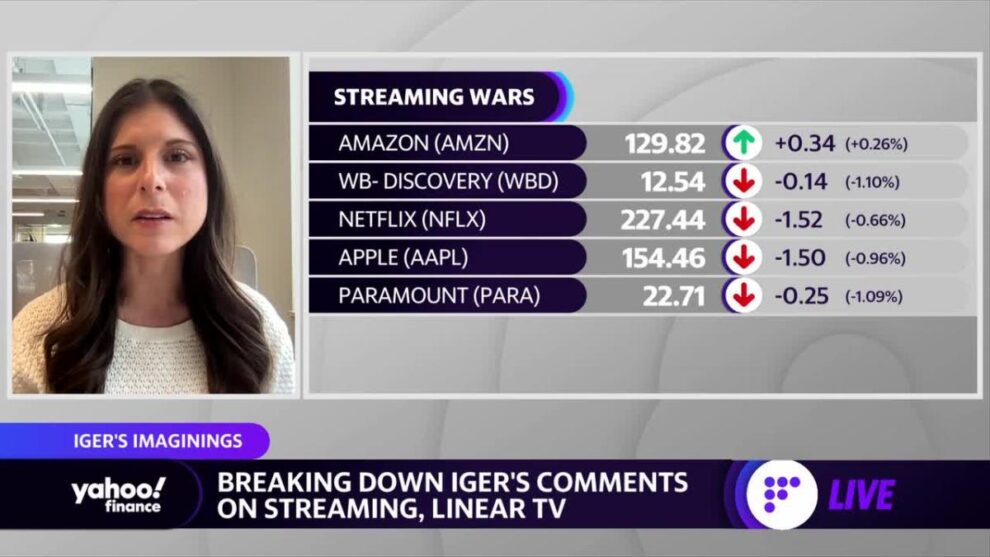 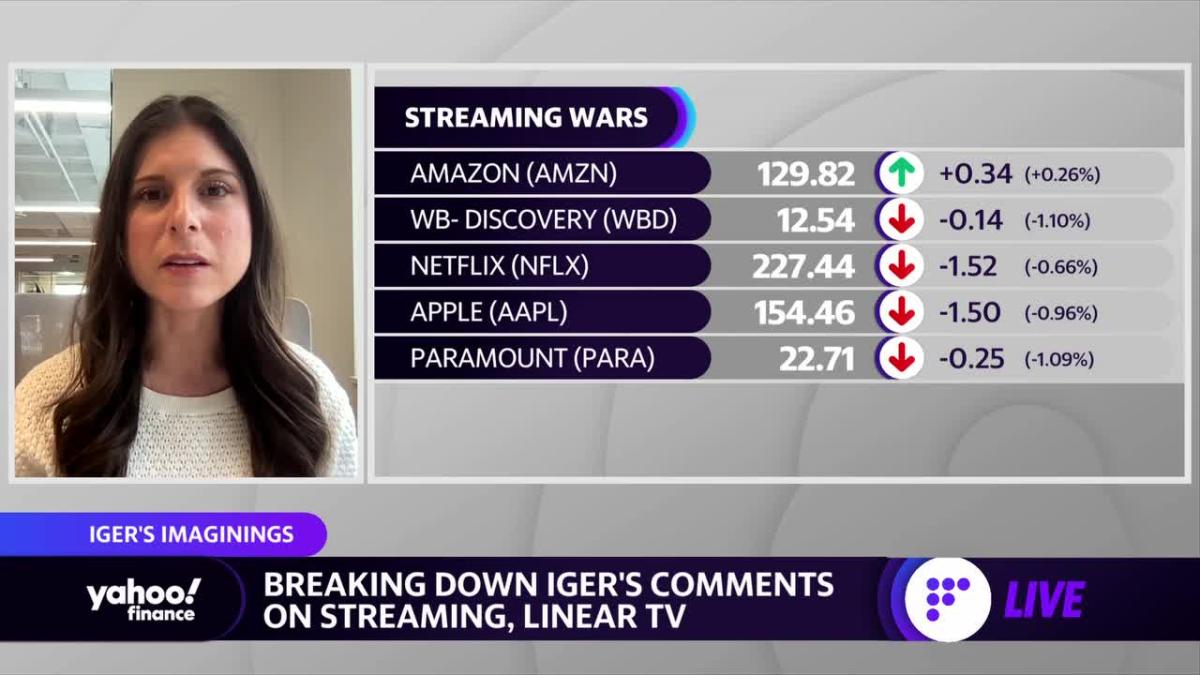 Axios Media Reporter Sara Fischer joins Yahoo Finance Live to discuss the latest in streaming wars and why price consolidation may be necessary.

– Former Disney CEO Bob Iger has a dire prediction for some streaming players, warning that, quote, “not all are created equal and not all are going to make it.” We want to bring in Axios’ media reporter Sara Fischer joining us now for more on this. And Sara just your first take on Iger’s prediction, the fact that only a few are going to survive, and also who you think is best positioned and will be able to survive.

And with prices going up, that means most are only willing to spend on three or four. So there’s going to have to be consolidation in order for these services to survive. Right now, Netflix and Disney obviously have the clear lead with over 220 million subscribers worldwide to both of those. Of course, Disney’s is across Disney+, ESPN+, and Hulu.

But then you have some services that are strong in terms of their content but they don’t have as much of a reach at this point. So that would include whatever is going to be the combination of Discovery Plus and HBO Max as well as Paramount+. And I think in the future, you’re going to see even some of the smaller services– think about things like Starz or Showtime– be consolidated into some of the bigger ones to be able to more aggressively compete with the Netflixes and Disneys of the World

SARA FISCHER: Great question. So I’d say in terms of Amazon and Apple, the thing to remember about those services is that when it comes to big tech, they’re using streaming to sell other things. You know, Amazon wants you to buy an Amazon Prime subscription. Apple wants you to buy more phones and more computers.

And so from them, streaming is not the main thing that they do. It’s just a vehicle to sell other stuff. Whereas for Peacock and some of the other companies that you noted, these streaming services are sort of the bread and butter of their businesses. They kind of complement other sort of dying legacy businesses, whether that’s linear TV, et cetera.

You know, you asked how long is linear TV going to survive, the typical answer has long been as long as sports rights remain on linear TV there’s going to be an audience for it. I mean, there was a report out earlier this year that essentially said that the floor, meaning the bottom, that the fewest amount of people that will pay for pay-tv, it’s probably about 55 million people. And that’s the number of people, or households if you will, that are willing to always pay for sports so long as they’re on live linear TV packages.

I think what will be a key, seminal moment for the TV industry is when we find out whether or not the NFL does grant its major Sunday ticket rights package to a streamer, as it’s expected to. If that goes to Amazon or Apple, I think in the future a lot more big-ticket sports rights will move over to streaming. And that will expedite the death of linear TV.

– So who do you think is most in trouble? Because when I was having a conversation with friends, we started talking about TiVo, how that went out the window after, obviously, other sort of streamers came into play. Who is then perhaps most at risk, do you think?

SARA FISCHER: It’s interesting. You know, in the past quarter, cable companies did not perform well. If you think about how their companies are structured, they really made a lot of money on pay-tv.

And then when pay-tv started to decline, they started to invest a lot in broadband. And now broadband growth is starting to slow, and a lot of those companies– Comcast is a good example of that– are starting to invest now in streaming. Will it be enough to offset the losses from some of those other two big major businesses? I’m not quite sure.

– Sara, going back to what you were just saying a minute ago about sports and streaming, because there’s going to be a real test next week. “Thursday Night Football” is going to be on Amazon. All eyes will be watching. Some are saying that this is a turning point here just in terms of sports and the future of how we view sports. Is Amazon ready?

SARA FISCHER: Yeah, I mean, I’ve been watching the preseason games. I think Kirk and Al have pretty good chemistry. I think what’s interesting about Amazon is it offers you these real-time stats that we’ve never really been able to see before.

They actually have Amazon Web Services chips in the helmets of the players that help the viewer, someone like me, see in real time things I never could see before– running yards, total passes, things like that. Real-time streaming also could one day be a boon for real-time betting, microbetting. And that’s going to be, in many ways, the future of the fan experience.

And so, yes, this is a seminal moment for sports. And yes, this is a big test for Amazon. But it’s not like they’re going in completely without any sort of experience. They have now had two preseason trial runs that have gone pretty smoothly. And I think so long as they continue to do those games without any technical hiccups, I think it should work out pretty well.

– Yeah, the broadcast looked smooth. I’m curious about the viewership. “Thursday Night Football” averaged 16 and 1/2 million viewers last year. How big of a back– a dropoff will we see on Amazon? And that I think the NFL is really watching to see their future in streaming.

But the other streaming story has been “Lord of the Rings” versus “Game of Thrones,” HBO Max versus Amazon. Do you have any winners and losers in that game of survival over the past couple of weeks?

SARA FISCHER: Yeah, that’s a really good point, by the way, about viewership. Amazon has struck a deal with Nielsen, so we will be getting viewership from their games. And also, remember they have a deal With DirecTV to showcase these games in many thousands of bars and restaurants around the country. So it’s not like you absolutely have to have an Amazon subscription to see those Thursday night games.

In terms of a “Game of Thrones” prequel, “House of Dragons” versus “Lord of the Rings,” I think they are both in a really great spot, debuting when there is a huge lull this summer. And by the way, it’s not just a lull in streaming. It’s a lull at the box office. There’s not a lot of new stuff coming in.

I thought it was funny that “Spider-Man,” which debuted last December, was one of the top films from Labor Day weekend and it’s re-release. So both of these companies are going to do very well just because they picked the right time to debut. In terms of who’s going to edge out one over the other in viewership, who knows? I mean, these series completely change from episode to episode. But I am curious to see when both are done how the viewership stacks up.

– And I want to just quickly ask before we go about Twitter. Obviously, most people think of it just in terms of Elon Musk right now. But at one point, Disney was planning on buying Twitter but ended up bailing. What do you think was the fit that didn’t quite work for Disney?

SARA FISCHER: Well, Bob Iger said that it was just that there’s a lot of noise on that platform. It’s some of the chaos that ensues on Twitter in terms of political speech, and it can be very– it can be a tough asset to manage when you’re a brand that is really focused on family-friendly entertainment.

And so I think that was ultimately why Bob Iger and Disney walked away from it. I think other companies have eyed it, including Microsoft, et cetera. And the challenge with Twitter is that it is the platform that sort of represents a lot of the free speech debates as they evolve in our country. And so to take that on and to own that, that’s a pretty tall task.

– And we know also the issue with bots also raised eyebrows for him. But apparently, he did perhaps did enough due diligence to know to stay away from that one. A big thank you, though, to Sara Fischer there for joining us this afternoon.