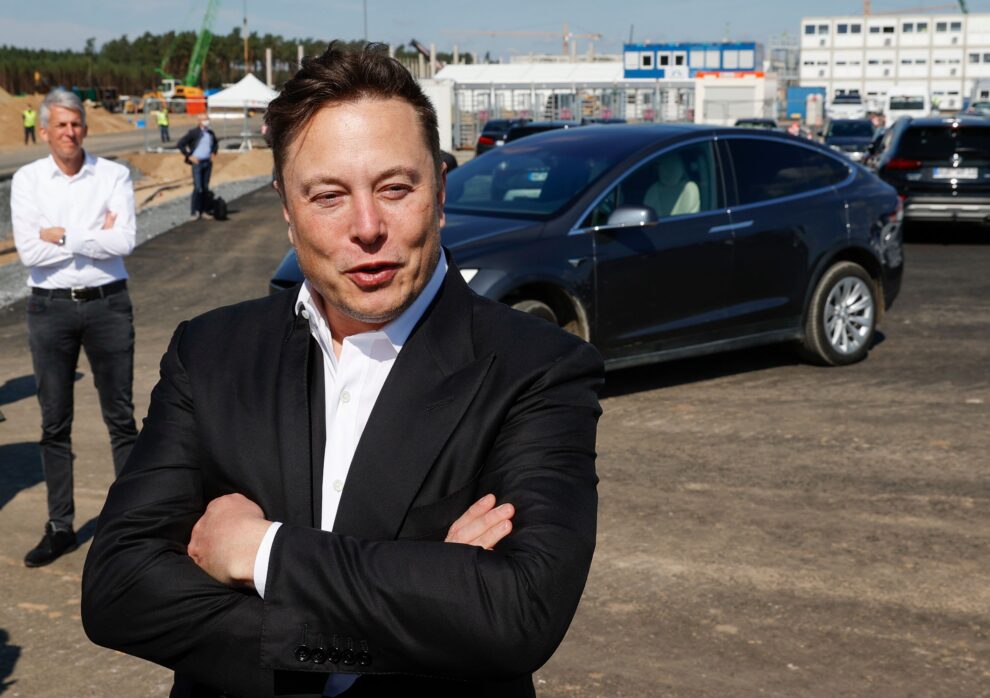 Tesla CEO Elon Musk talks to media as he arrives to visit the construction site of the future US electric car giant Tesla, on September 03, 2020 in Gruenheide near Berlin.

Elon Musk’s electric car and renewable energy company, Tesla, reported third-quarter results after the bell on Wednesday. The stock was up 5% in premarket trading Thursday as the company beat expectations on EPS and revenue, and reported its fifth consecutive quarter of profit.

Here is how Tesla performed versus analyst expectations:

The company already reported that it delivered 139,300 vehicles during the quarter, a new record for Tesla.

Automotive revenue comprised $7.6 billion, about 91% of the total for the quarter. Automotive gross margins, excluding regulatory credits, rose from 18.7% to 23.7% sequentially. Tesla raked in $397 million in regulatory credits during the quarter nearly doubling the amount it made from these “green” credits year-over-year.

Operating expenses jumped 33% from last quarter to $1.25 billion, as Tesla embarked on building new factories in Austin, Texas and Brandenburg, Germany, among other things.

Musk talked about production timelines for those factories in the company’s earnings call. “I should make a point that for Berlin and Austin, we do expect to start delivering cars from those factories next year but because of the exponential nature of the spool up of manufacturing plants especially one with new technology, we’ll start off very slow at first and then become very large.”

He cautioned investors that it could take 12 to 24 months even to hit full capacity at these new factories after they begin operations. Tesla previously planned to start production at the Berlin factory in July 2021.

When asked about the Cybertruck, Musk said he expects some deliveries of the truck — which resembles a large metal trapezoid — to begin by the end of 2021 “if things go well.”

The Cybertruck was unveiled on Nov. 21, 2019. Musk has boasted that Tesla received hundreds of thousands of pre-orders for the vehicle shortly after its debut.

Kirkhorn acknowledged that Tesla’s third-quarter results were helped by better-than-expected regulatory credit sales. “The regulatory credits business was stronger than our expectations and we are tracking to more than double this year compared to last,” he said.

He also said that in 2021 and 2022, Tesla plans to spend far more than it previously forecast — $2.5 billion, especially on new factories and expansion.

Tesla has raised more than $7 billion in the past 9 months. It completed a five-for-one stock split during the quarter. When a company splits its stock, its total value doesn’t change, but it helps get smaller investors to buy shares. Tesla also completed the sale of $5 billion of its common stock in September through an at-the-market offering.

Payback on upcoming capital expenditures may take longer than what Tesla achieved on its newest factory investment in Shanghai, the CFO noted.

How to buy Litecoin in the UK