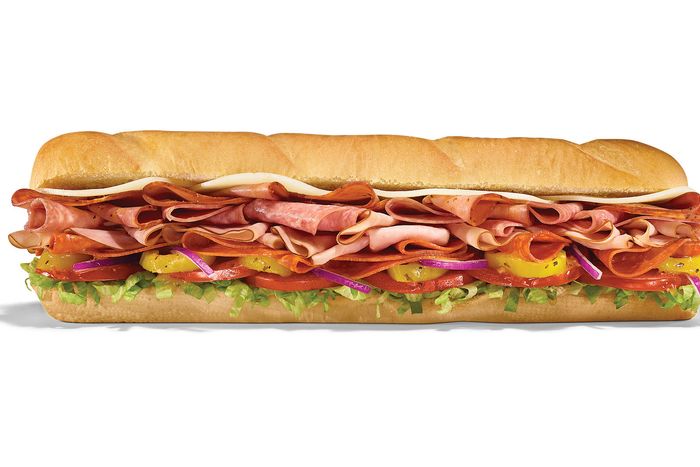 The chain says its Subway Series sandwiches are 'expertly crafted.' But will customers be OK with the fact they can't decide what goes into them? Read More...

Have we reached peak customization?

That was my thought when I learned today that Subway is rolling out a new menu of sandwiches that can’t be customized. That’s right, this is coming from the same chain famous for letting you pile on all the veggies you want or letting you put Buffalo sauce and guacamole on your tuna sub if that’s your thing. To be clear, Subway is still letting you go the customization route, but you can now also opt for a streamlined slate of 12 sandwiches, cleverly dubbed the Subway Series. The offerings are identified by both a number and name, as in #3 (or The Monster, a cheesesteak sub) or #6 (The Boss, a meatball sub).

The sandwiches are clearly in the crowd-pleasing mold and not unlike what many Subway regulars would, well, regularly order. The Connecticut-based chain, which has 37,000 restaurants, all franchisee-owned and operated, spread across 100-plus countries, said the offerings are “expertly crafted” and designed to bring “out the best of Subway.”

Subway’s move is also described by the chain as its biggest menu shake-up in six decades. And it could be a game-changer for the industry as a whole, coming after years and years of fast-food chains embracing customization. Think of Chipotle CMG, +4.34% and its assembly-line approach to burrito making where you can pick and choose what type of beans you want (or request no beans at all). Or think of Starbucks SBUX, +0.15%, where ordering a simple cup of coffee has become almost a spectacle worthy of a daytime drama (ever heard of The Edward drink?).

So maybe Subway has figured out that sometimes less is more. To be fair, the new sandwiches aren’t necessarily slimmed-down affairs: The Monster, for example, comes with steak, bacon, Monterey cheddar, green peppers and red onions. But the idea is to eliminate any choice beyond the most basic one of picking the sandwich itself.

It’s an idea that couldn’t be timelier, restaurant-industry analysts and observers say. Like many businesses, dining spots are burdened these days by labor shortages and supply-chain issues, so they are looking to streamline operations as much as possible. As New York-based restaurant consultant Arlene Spiegel explains, customization adds time to the equation of preparing an order — and time is money. It can even require restaurants to have bigger kitchens to accommodate extra ingredients, she notes. The key, she says, is for a restaurant to “create a system where the guest thinks they’re getting it their way but it’s really the operator’s way.”

Plus, in the case of Subway, the need to shake things up could be a way to stand out from the competition, says Mark Kalinowski, a veteran analyst of fast-food chains. He notes a range of similarly styled sub chains that are gaining growing attention, such as Jersey Mike’s and Firehouse Subs (which was recently acquired by Restaurant Brands International QSR, +0.15% ). Plus, there’s intense competition from other fast-food chains — consider Popeye’s and the chicken sandwich that the world can’t stop devouring.

Here’s the thing: I like Popeye’s, but I love Subway. Part of that love is rooted in the chain’s “have it your way” ethos (Subway always way outdid Burger King in that regard, despite the fact BK was behind the “your way” tagline). I particularly like to make a sub more of a sandwich and a salad all in one — yes, I’m the guy who asks for extra cucumbers, extra tomatoes and extra just about everything else.

So, I can’t say the new subs thrilled me. I sampled four in all today: #2 (The Outlaw, with steak); #4 (Supreme Meats, an Italian-style affair); #8 (The Great Garlic, with chicken and roasted garlic aioli); and #10 (All-American Club, with ham and bacon). Mind you, they were tasty enough. But they weren’t my subs — and with the exception of #8, they felt a little skimpy. As I said, more is more when it comes to my Subway subs — and those extra veggies are a healthy way to fill up. Plus, how is there not a tuna offering on the Subway Series menu? (I’m all about Subway’s tuna, despite some controversies.)

My final nit to pick: There’s truly no way to customize these subs, save for your choice of bread. I know: I tried to convince my local Subway to throw a few jalapeño slices on my Outlaw sub to make it more, um, outlaw-ish. No dice, I was told. These subs stay as they are.

Which is precisely the point. And I can’t help but think that’s perhaps not only a good thing for the chain’s bottom line, but also for some customers who are tired of deliberating over every detail that goes into what is supposed to be fast food. Even I admit to sometimes feeling frustrated as I mull each condiment choice when I walk down the Subway line. It’s enough to make one say, “Ah, to heck with it. Just give me a #4.”

For now, I’ll still stick with the option to customize, which Subway thankfully continues to provide. That is, until the chain has the good sense to turn one of my specialty creations — call it The Extra — into its next menu item.