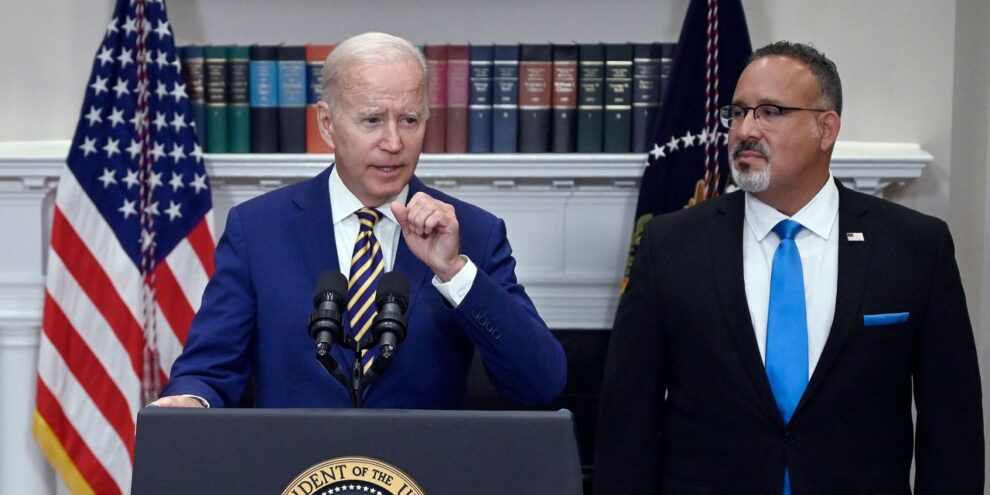 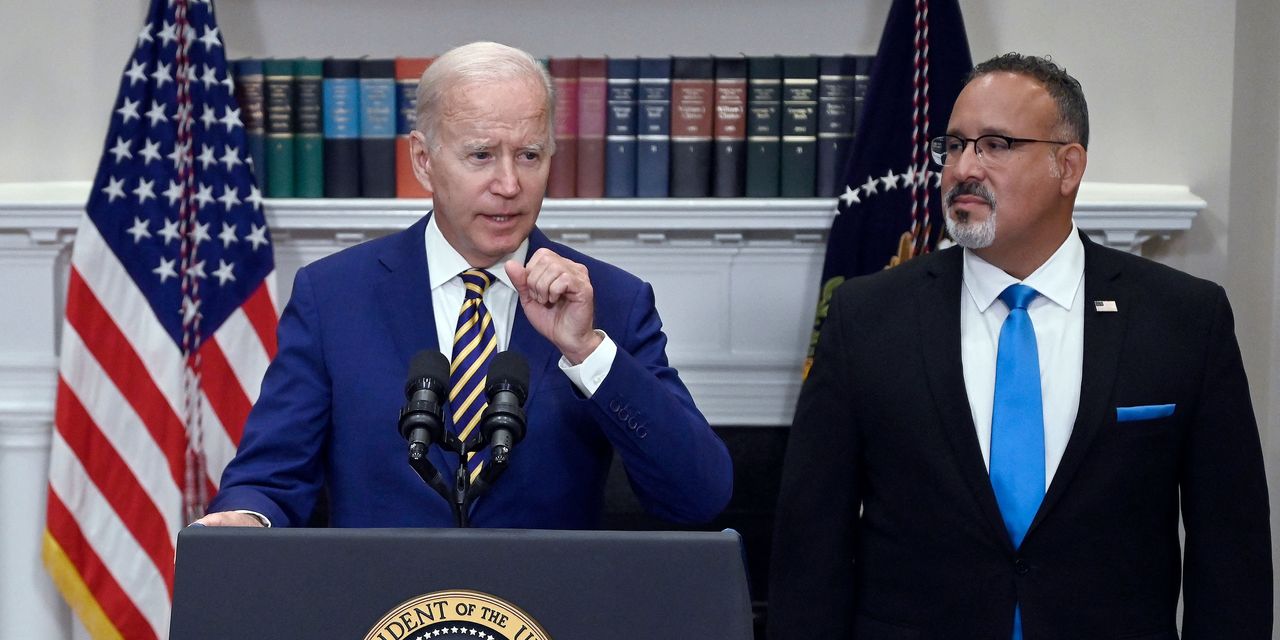 During the multiple-year debate over mass student-loan forgiveness, one of the major points of contention was whether the Secretary of Education had the legal authority to discharge student loans without congressional action.

With Wednesday’s announcement that the Department of Education will cancel up to $10,000 in student debt for borrowers earning up to $125,000, and as much as $20,000 for borrowers who received a Pell grant, the White House is saying he does. Now, stakeholders will be watching closely to see whether critics challenge the policy in court, and if so, how the Biden administration’s legal reasoning holds up.

Though the battle is likely to look like a wonky courtroom back and forth over executive authority, it could have implications for borrowers. David Bergeron, a former Department of Education official who has supported debt cancellation, but preferred it be done through Congress, said the Biden administration’s approach to discharging the debt isn’t “an unreasonable use” of the Department of Education’s authority.  Still, “it makes me nervous,” said Bergeron, who worked at the agency for more than three decades.

“It leaves the Department open to potential litigation,” he said. “At the end of the day if there is litigation, it’s not the Department that gets harmed over the long term, it’s the borrowers, who don’t get the relief they now expect because of this announcement.”

In two memos released along with Wednesday’s announcement, the Department of Education’s Office of General Counsel and the Department of Justice’s Office of Legal Counsel argued that their legal authority to take this action rests in the HEROES Act. The 2003 law allows the Secretary of Education to provide debt relief to borrowers in cases of a natural disaster, a national emergency and other similar circumstances. When the Trump Administration enacted the payment pause for the first time in March 2020, officials relied on the HEROES Act for that authority.

More specifically, the memos argue that the HEROES Act gives the Secretary of Education the authority to waive or modify provisions related to student financial assistance if they deem those actions necessary to ensure that borrowers are “not placed in a worse position financially” due to a national emergency.

In this case, the national emergency is the COVID-19 pandemic and debt cancellation is the action deemed necessary to ensure borrowers won’t be financially worse off. The Department of Education and the Justice Department didn’t immediately respond to requests for comment on the legal reasoning underlying the debt relief, but White House Press Secretary Karine Jean-Pierre told reporters Wednesday that the Administration is “confident in that legal authority.”

Advocates pushing for debt relief over the past several months had urged the White House and the Department of Education to use a different authority, known as settlement and compromise, to cancel student loans en masse. That authority is rooted in the Higher Education Act, which says that the Secretary of Education can “compromise, waive, or release,” or, separately “modify” claims against private parties, including student debtors, said Luke Herrine, an assistant professor of law at the University of Alabama, and one of the architects behind that legal theory.

The HEROES Act authority is not as “sweeping,” as settlement and compromise, which “has upsides and downsides,” Herrine said.

“One reason to use this authority versus the compromise authority would be if you want to do this as a one-time thing and not be continuously asked to do this again,” Herrine said. “From a more try to button it up in front of a court perspective, there’s a clear limiting principle.”

And indeed, Biden Administration officials have framed the debt cancellation as a policy directly tied to the pandemic and used language in public comments mirroring the “not placed in a worse position financially” language in the HEROES Act.

“The goal is to make it out of the pandemic no worse off than you were before the pandemic,” Secretary of Education Miguel Cardona told NPR. “So this is targeted relief based off of [the] pandemic.”

Bharat Ramamurti, the deputy director of the National Economic Council, told reporters during a press briefing Wednesday that part of the motivation for debt cancellation was officials’ concern that when student loan payments resume some borrowers may struggle to make those payments and slip into delinquency and default.

“Part of what the legal authority is being used to do here, in a targeted way, is to make sure that those borrowers who are at highest risk of distress after the restart happens, those are the people who are going to get the relief,” Ramamurti said. “The legal authority gives the Secretary the ability to make sure that the pandemic and the emergency does not cause a net financial harm to those folks.”

Still, the Supreme Court’s decision in the West Virginia vs. EPA case earlier this year could give any detractors of the policy fodder for the challenge, said David Rubenstein, a professor at Washburn University School of Law. In that case, the court found that when executive branch agencies undertake action with significant political or economic impact, they’re overreaching unless it’s clear that Congress intended for the agency to have that authority. The threshold is known as the major questions doctrine.

“Assuming that there is a proper plaintiff to bring the claim, this policy would be prime for challenge under the major questions doctrine,” Rubenstein said.

It’s hard to say exactly how courts will view student debt cancellation in this context because the major questions doctrine is so new and its contours are vague, Rubenstein said. Still, “even broadly worded delegations of authority—like the type the Dept of Education is relying on—may not meet this threshold,” Rubenstein wrote in an email.

For example, in West Virginia vs. EPA, the court found that the Environmental Protection Agency didn’t have the authority it took to regulate emissions, despite the Clean Air Act broadly delegating authority to the EPA that could “reasonably be interpreted to encompass the agency action,” Rubenstein wrote.

Decisions like the West Virginia vs. EPA case and a 2021 ruling striking down the Biden administration’s extension of the pandemic-related eviction moratorium, indicate that whether the Biden administration used the settlement and compromise authority or the HEROES Act authority to cancel student debt, this Supreme Court was likely to view the action skeptically, Herrine said.

But stakeholders, including borrowers, could feel the impact of a legal battle well before it reached the nation’s highest court. That’s because if a lower court issues a temporary injunction halting the Biden administration’s actions it could stall the Department of Education’s ability to deliver the debt relief.

One of the benefits of using the HEROES Act as the legal basis for the debt relief is that it’s an emergency power that doesn’t require any sort of rulemaking procedure, meaning officials can start working quickly to cancel borrowers’ debt, Herrine said.

The speed with which the Department of Education is able to start discharging loans could have an impact on the legal landscape surrounding the decision. The Department estimates that nearly 8 million borrowers could have their loans canceled automatically because they’ve already provided relevant income information to the Department.

Once borrowers see their balances drop or disappear, that could make it more difficult for some entities to challenge the policy “from a PR perspective,” Bergeron said. It’s also unlikely that if an injunction came after borrowers received the relief, it’s unlikely the court would actually reimpose the debt, Bergeron and Herrine said.

Even if borrowers don’t see any relief before a legal challenge, the fact that they feel entitled to the cancellation, given that Biden already announced it, could push courts to consider the Department’s action differently than the EPA’s, Rubenstein said. Environmental regulations are more abstract to the average American than student debt relief.

That dynamic, “may or may not factor into a court’s formal legal analysis,” Rubenstein wrote in an email. “But for courts and judges concerned about public perceptions of judicial politics, the optics of overturning student debt relief could play an unstated (if not explicit) role in whether or how to apply the major questions doctrine in this context.”

Who will challenge is still an open question

Who might bring a lawsuit is still an open question. Scott Buchanan, the executive director of the Student Loan Servicing Alliance, said servicers, the companies that are borrowers’ first point of contact when repaying their loans, are unlikely to sue over the policy.

A small percentage of federal student loans are still owned by commercial lenders. It’s possible those who have a stake in those loans, including their owners and guarantee agencies — which essentially functioned as middlemen in the bank-based student loan system — may challenge the decision. Some of these guarantee agencies are entities linked to state governments, which means states with a political environment that’s hostile to student debt cancellation could choose to challenge the Biden Administration’s actions. Some Republican lawmakers are already calling for a court challenge.

Biden administration officials haven’t said whether commercially-held FFEL loans are included in the debt relief (in its news release, the Department of Education said the debt cancellation applies to loans “held by the Department”). But even if they’re excluded, lenders and guarantee agencies may make a claim based on the idea that the debt relief program would encourage borrowers to consolidate their commercially-held loans into debt owned directly by the government, Bergeron said.

Whether the Biden administration will be able to cancel a significant amount of debt before a lawsuit is filed is “largely a question of how prepared,” entities that might be considering litigation are to make their case, Bergeron said.

“That’s the reason that the Department of Education and Justice Department have been extraordinarily careful not to release the legal opinions early,” Bergeron speculated. “I think that it was very well thought out, the strategy to announce the plan and then go through the process of releasing the supporting documents.”