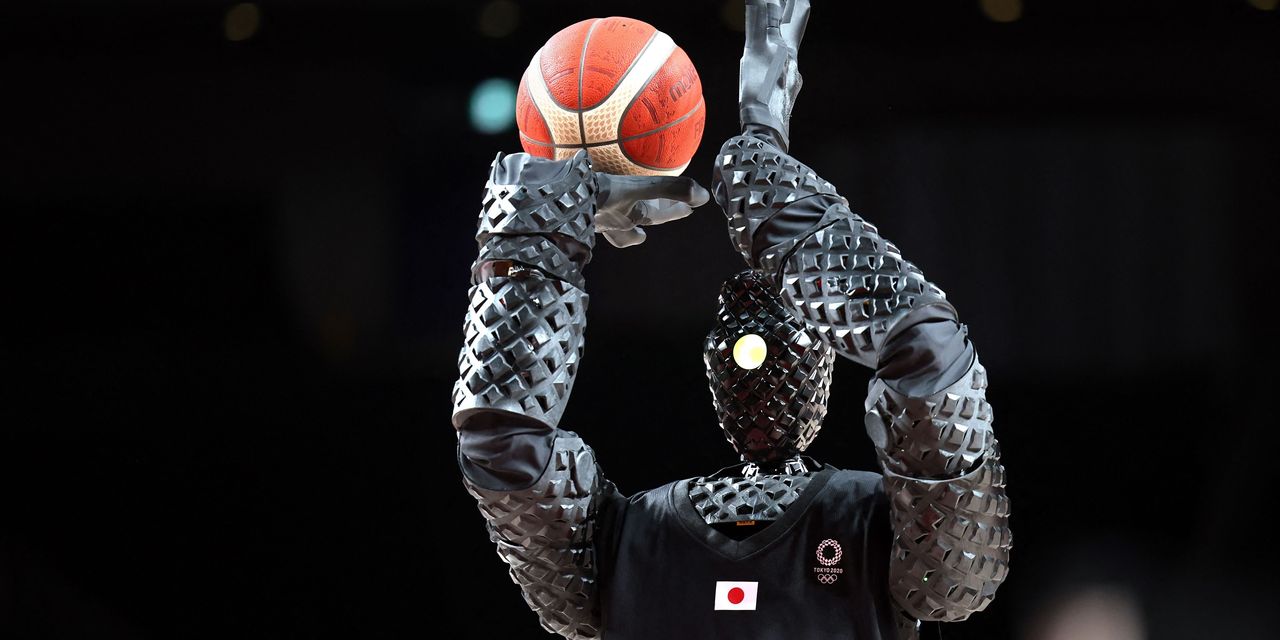 Nothing but net for Skynet!

A 6′ 10″ basketball-playing robot sank a series of deep three-point shots and a half-court shot during halftime of the Men’s Preliminary Round Group B game between the U.S. and France on Sunday.

And the mechanical man invited plenty of comparisons to the murderous, self-aware computer system from the ”Terminator” movies that nearly wiped out humanity. “Here’s our robot overlord hitting free throws at the Olympics,” tweeted one.

Some headlines also referred to the free-throw machine as “horrifying” and “creepy.”

So what is it exactly?

Meet CUE, an artificial intelligence (AI) basketball robot developed by Toyota TM, -0.16% volunteers in their spare time. The original model was crafted in 2018, and by May 2019, the third version (CUE3, which was developed in five months) set the Guinness World Record for “Most consecutive basketball free throws by a humanoid robot (assisted) — 2,020” in honor of the Tokyo 2020 Olympic and Paralympic Games.

It’s unclear which version of CUE stole the show during Sunday’s game, where France beat the U.S. team in a 83-76 upset — the American Olympic basketball team’s first defeat since the 2004 Athens Games. The CUE seen sinking baskets on Saturday was sporting a No. 95 jersey, whereas the CUE3 and CUE4 have worn 93 and 94, respectively. (The Toyota site explains this is because the number 9 is a homonym for “cue” in Japanese. And the “cue” name reflects how technology can serve as a cue for great things to come.)

The CUE4’s official stats note that it stands almost 6 feet, 10 inches tall and weighs about 200 pounds. Its position is listed as “shooting guard,” and it takes about 15 seconds to make a shot, the developers explain on the project website. The CUE uses sensors on its torso calculates the distance to the goal and the angle of the basket, before using its motorized arms and knees to shoot.

But another gadget gave the CUE a run for its money in competing for the audience’s favorite Olympic robot. During the Rugby 7s opener between Fiji and Japan on Sunday, a remote-controlled “Tiny Bus” delivered the match ball to the 50 meter line.

Are Any Marijuana Stocks On U.S. Exchanges Good Buys As This One Forms A Base?
Bitcoin Nears $40,000 as Shorts Fuel Rally on Amazon Speculation
Comment

Intel CEO: ‘We will pursue opportunities with Apple’

The Week In Cannabis: A New Global Leader, Moves In UK And Colombia, ETFs Outperform