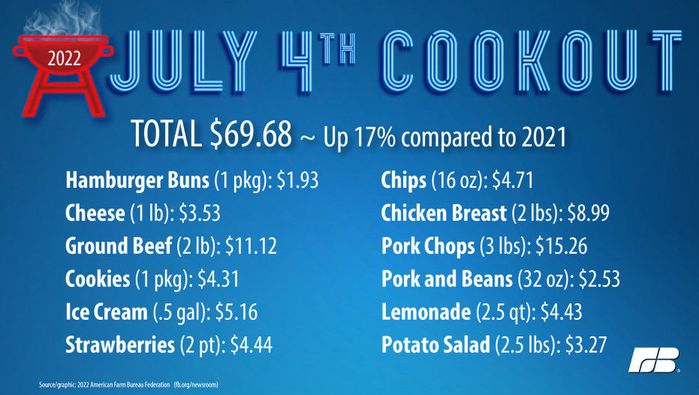 As the cost of cookout staples like hamburger buns and ice cream surge, the tab for a traditional Fourth of July spread is about $10 more than last year Read More...

If you’re planning a Fourth of July barbecue, be prepared to dig deeper into your wallet.

The American Farm Bureau Federation has found that the cost of the traditional holiday cookout, including everything from hamburgers and buns to ice cream and potato salad, has increased by 17% (or about $10) to $69.68 in the past year. And that’s not including alcohol.

And if you’re looking for something to wash down the meal, you’ll feel the pinch as well: The cost of fresh-squeezed lemonade (2.5 quarts) has spiked by 22% to $4.43.

Still, a couple of cookout must-haves are actually dropping in price. The cost of two pints of strawberries has dipped by 16% to $4.44, this report found. And a pound of sliced cheese has gone down by 13% to $3.53.

Not that the overall cookout price hike should come as a surprise at a time when the rate of inflation is 8.6%. Recent federal data shows that Americans are paying dramatically more for a number of consumer goods. For example, the price of a dozen eggs has gone up in the past year from $1.62 to $2.86.  And U.S. retail sales fell for the first time in five months in May.

“This is a sign that higher prices are starting to thwart consumer demand,” said economist Katherine Judge of CIBC Economics.

It’s not just consumers who are being challenged. Farm Bureau Chief Economist Roger Cryan said farmers are feeling inflationary pain, despite the fact their goods may be going up in price. That’s because farmers are themselves paying more for everything from fuel to fertilizer, Cryan noted.

“Bottom line, in many cases the higher prices farmers are being paid aren’t covering the increase in their farm expenses,” Cryan said in a statement.

The Farm Bureau report follows a similar survey by the Political Calculations blog, which found that the cost of a Fourth of July spread has increased by 20.9% to $71.98. Ice cream (up 58.6% to $4.69) and hamburger buns (55.4% to $1.66 for an eight-pack) were two staples driving up the cookout tab in that report. It also found chicken breasts and pork chops to throw on the grill rose by 30% or more in the past year.

The Political Calculations blog noted that consumers can still find ways to save money, even with the price hikes. “A good strategy would be to substitute store-brand versions of the products, assuming you’re okay with any differences in quality. You could also shop at other grocery stores that may offer lower prices,” the blog said.