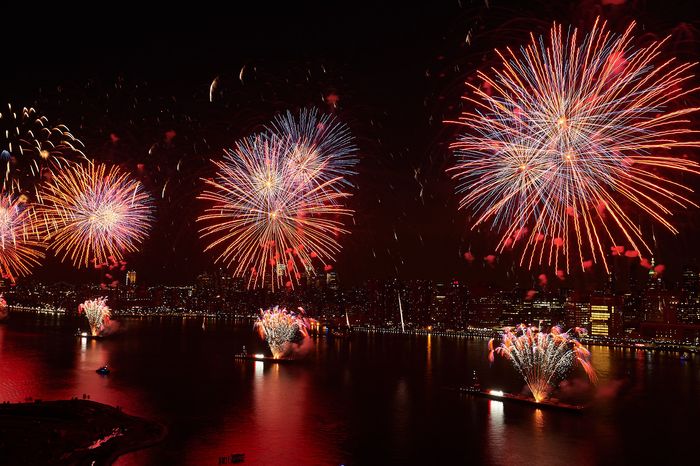 On July 4, 48,000 shells and effects will light the sky with new shapes like howling wolves and color-changing ghosts. Here's where to watch or stream. Read More...

The Macy’s Fourth of July fireworks show is back with a bang.

The 46th annual star-spangled salute from New York City promises to “ignite the night” with more than 48,000 exploding shells and pyrotechnic effects illuminating the sky over the East River for 25 minutes on Monday night.

Viewers who don’t live in the Big Apple can tune into NBC’s national broadcast from 8 to 10 p.m. ET/PT, or 7 to 9 p.m. CT/MT on Monday, and NBC will also have an hour-long encore presentation from 10-11 p.m. ET. Check your local listings.

You can also stream the fireworks on Comcast’s CMCSA, +2.68% Peacock service, or watch NBC Live online, or watch it live via YouTube TV GOOG, -0.27%, Hulu+ Live TV and Sling TV.

NYC residents can check out Macy’s spectator site here for maps on where to watch the fireworks in-person from Midtown East, and along the Queens and Brooklyn riverfronts.

The Independence Day special will include musical performances by 5 Seconds of Summer, Brett Eldredge, Carly Pearce and Pitbull, as well as the cast of Freestyle Love Supreme, which includes “Hamilton” star and creator Lin-Manuel Miranda.

But the main event — the fireworks themselves — lift off at approximately 9:25 p.m. ET. And Coss told MarketWatch that every element in this year’s show has been specially choreographed to a musical score curated by Ray Chew, the musical director for ABC’s DIS, +1.84%  “Dancing with the Stars,” which features jazz, hip-hop, rock and country tunes, as well as patriotic standards like the national anthem. Soul singer Kenny Lattimore and the Community Baptist Church Choir also perform “Lift Every Voice and Sing” for the soundtrack.

“We’re really showcasing all that American music has to offer,” said Coss.

But there’s no upstaging the fireworks themselves. While Macy’s would not disclose what they’re spending to throw the self-described biggest Fourth of July fireworks display in the country, industry insiders have put the pricetag in the $6 million to $7 million ballpark. “This is a multi-million dollar event,” Julie Heckman from the American Pyrotechnics Association previously told MarketWatch. “The fireworks and those barges are gonna be in the six figures, but then you’ve got the live entertainment, staging, traffic management and security costs.”

Related: July 4 forecast: Inflation is raising the cost of summer BBQs by 17% to $70 on average, before alcohol

And this year’s show features effects in 30 different colors, including new shades of grasshopper green, gamboge (a saffron-like color) and titanium, as well as new shapes including tall hats, mushrooms and interlocking rings. What’s more, one-third of the shells will burst with multiple effects — so the initial starbursts lead to other animated elements, such as color-changing ghosts, winking smiley faces and howling wolves, Coss said.

“You’re going to see the fireworks really dance to the music this year in a way that’s gonna be fun and delightful for our audience,” he said.

Here’s a look at the 2022 Macy’s Fourth of July fireworks celebration by the numbers.