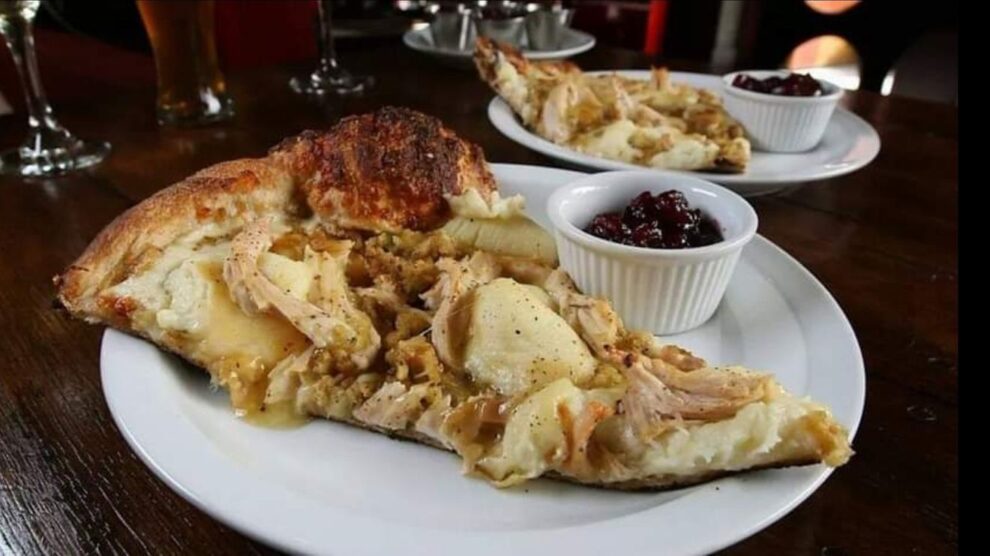 Pizza sales skyrocketed during the pandemic --- and pizza makers got creative as well Read More...

When Nick Argy celebrates Thanksgiving, it’s naturally all about the turkey and trimmings. But in his case, they’re toppings for a loaded-to-the-max pizza.

Argy is the proprietor of Macy’s Place Pizzeria, a 12-year-old establishment in suburban Buffalo, N.Y., that has gained a small measure of viral fame this year for its Thanksgiving-themed pizza. The pie, which costs $28, incorporates pretty much everything that goes into the holiday feast — turkey (both white and dark meat), mashed potatoes, stuffing, corn, cranberry sauce and gravy — with a smothering of mozzarella and cheddar cheese.

“It comes together, I’m telling you,” said Argy, who has been going into overdrive making the pies to keep pace with demand. “I’m crock-potting turkey left and right,” he added.

Argy is in good company. Across the country, many restaurants that specialize in pizza are also doing their version of a holiday pie (the savory kind, that is). In some cases, the tradition has been building for years.

At Fellini Pizzeria, a Rhode Island establishment with two locations, the Thanksgiving pizza has been a favorite for more than a decade. The pie, with turkey and trimmings save for the cranberry sauce (it goes on the side), is offered just one day of the year — Thanksgiving Eve. Proprietor Kristy Knoedler sells a limited amount — about 1,100 pies, priced at $44.50 apiece — and takes orders starting on the first day of fall. This year, she says she sold out of her allotment in eight hours, though she also sets aside some pies so she can offer slices for those who missed the opportunity.

Even then, Knoedler says things can get a little crazy. “The line goes up the street and around the corner,” she said.

Pizza makers say the pies take a certain culinary savvy to pull off correctly. Most opt to eliminate tomato sauce, for example. “It’s not really in the flavor profile of what we’re looking for,” said Jonathan Haffmans, chef of Industry Kitchen, a New York City restaurant known for its wood-fired pizzas. Haffmans serves a Thanksgiving flatbread — similar to a pizza — around holiday time topped with turkey, stuffing and an orange-cranberry sauce, among other ingredients.

In a sense, the current craze for Thanksgiving pizza is decades in the making. Chefs and pizzaiolos — the term for pizza specialists — have been embracing creative toppings since as far back as the 1980s: Think Wolfgang Puck and his now-famous smoked-salmon pizza. Or the California Pizza Kitchen chain with its barbecue-chicken and other inventive pies.

Thanksgiving pizza may have gotten a boost more recently because of the pandemic, says Cara Meiselman, director of strategic content performance for Slice, a pizza-ordering app. She notes that pizza became a strong seller at the onset of the health crisis, when people could no longer dine out and started relying increasingly on takeout and delivery (pizza is a natural to-go fixture, after all). People also wanted to set a more festive tone in whatever way possible last Thanksgiving, when family get-togethers were generally avoided. Put it all together, and a Thanksgiving pizza became a way to “fill that void,” Meiselman said.

A final factor behind the trend: It’s no secret that in recent years, restaurants have offered outrageous dishes to generate buzz on social media. A Thanksgiving pizza is a perfect “Instagram-able moment,” said Alper Uyanik, a proprietor of two New York City pizzerias, Harlem Pizza Co. and Sliced by Harlem Pizza Co.

That doesn’t mean Uyanik is offering a Thanksgiving pie. He finds the whole idea a bit gimmicky. So do many other pizza professionals. “There are certain things that shouldn’t be put on a pizza, and one of them is turkey and stuffing,” said Michael Ayoub, owner and chef of Fornino, an Italian restaurant with locations in New York City. Justin Piazza, proprietor of Piazza Al Forno, a pizzeria in Glendale, Ariz., has a similar take: “Sometimes too much is too much,” he said. (Piazza is also in the camp who refuses to put pineapple on pizza.)

Of course, if pizza isn’t your thing, there are plenty of restaurants that do Thanksgiving mashups of another sort, be it plates of mac ‘n’ cheese or poutine, a classic Canadian dish, that feature multiple holiday items in one. Thanksgiving-themed sandwiches are another option: 7-Eleven recently rolled out one with turkey and cranberry mayo that’s served on a stuffing-flavored roll.

Hutong, a Chinese restaurant in New York City, has also come up with a Thanksgiving-inspired dim-sum menu featuring dumplings and other items filled with turkey, yams or stuffing; so if you order a little of everything, you have the holiday feast covered. And Will Gilson, a Boston-area chef, has even found a way to make Swedish meatballs into a Thanksgiving all-in-one dish — he uses turkey for his meat, seasons it with stuffing spices and finishes it with a cranberry glaze.

Meanwhile, Nick Argy, the pizza maker near Buffalo, is already thinking ahead to what he can do for the next holiday — say, a dessert pizza for Christmas with a candy-cane-flavored crust. “It could happen,” he said.

Facebook picks winners and losers ahead of news page launch