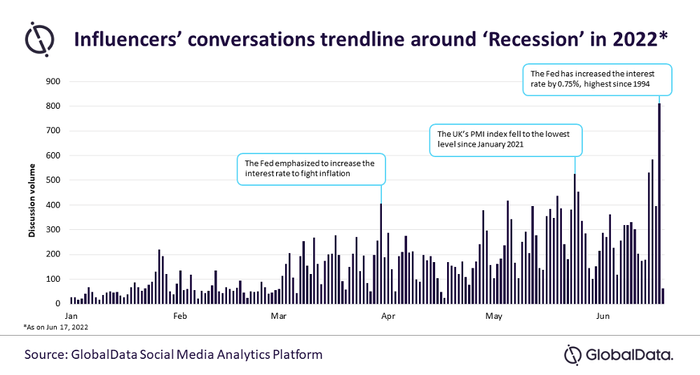 Twitter has seen more than 1 million tweets with the word "recession" since Jan. 1. Recession-related queries have also jumped on Google. Read More...

In fact, Twitter TWTR, +1.12% influencers’ conversations around a possible recession have been rising since the beginning of the year, according to a new GlobalData report. And they spiked by 115% in the second quarter (between April and June) compared to the first quarter of 2022 between January and March.

GlobalData’s social media analytics platform tracks activity among selected Twitter Influencers and Reddit channels. And the report noticed the most significant spike in influencers’ “recession” discussions happened this past week, coinciding with the Federal Reserve Board’s biggest rate hike since 1994.

“‘Recession’ also witnessed a 126% rise quarter-on-quarter in negative sentiments as influencers are concerned about the possibility of an economic recession due to mounting pressure on the global economy with rising interest rates, supply chain disruptions and soaring inflation rates,” said GlobalData social media analyst Smitarani Tripathy in a statement.

It should be noted that what criteria GlobalData used in identifying “influencers” was unclear, and the company was not immediately available for comment. But the report included tweets from financial analysts, professors and journalists, including Charles Schwab’s SCHW, -1.43% chief investment strategist Liz Ann Sonders and political economist Richard Murphy.

The hashtag #recession has also trended on Twitter intermittently in recent weeks, including the morning of June 14th, the day before the Fed meeting. A Twitter rep told MarketWatch that the site has seen more than 1 million tweets that include the word “recession” since Jan. 1 of this year. Twitter also saw a spike in “recession” conversation volume on June 16, the day after the most recent Fed meeting, and also on May 24.

“Recession” has also been a popular topic and meme-generator in Reddit groups like WallStreetBets. Google GOOGL, +1.05% queries around the “recession” topic have been climbing over the past 90 days, as well, according to Google Trends data. And they peaked the day before the June 15th Fed meeting, when the board decided to raise the benchmark interest rate by 75 basis points to a 1.5% to 1.75% range in an attempt to slow inflation, which has hit a 40-year high.

Google searches for “how does a recession affect the average person” also rose 180% in the past week, according to Google Trends data, and the query “is a recession coming in 2023” more than tripled in that same window.

The recession chatter has also circled around what financial decisions people should be making now, with the most searched “should i… before a recession” Google queries including, “should I buy a house?” and “should I sell my house?” — as well as questions about whether people should pull their cash out of the bank, cash out their 401(K)s or change their 401(K) investments.

If you’re worried about the Fed rake hike, take a deep breath, and read these three smart financial moves to make right now related to your debt, big purchases and savings accounts.

These Weekend Reads can also serve as a guide on how to navigate the bear market for stocks, crypto and housing.