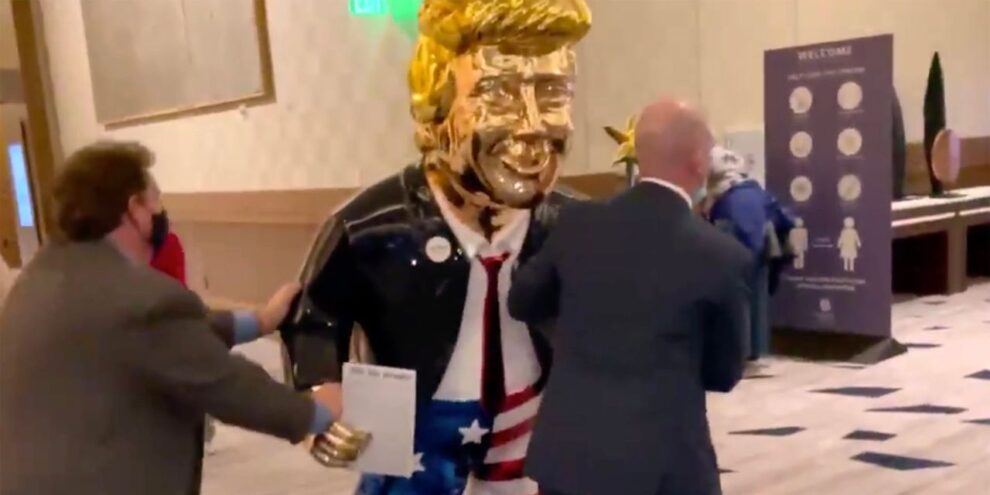 Comments like ‘the GOP worship a golden crook’ spread across Twitter faster than you can say 'Moses' Read More... 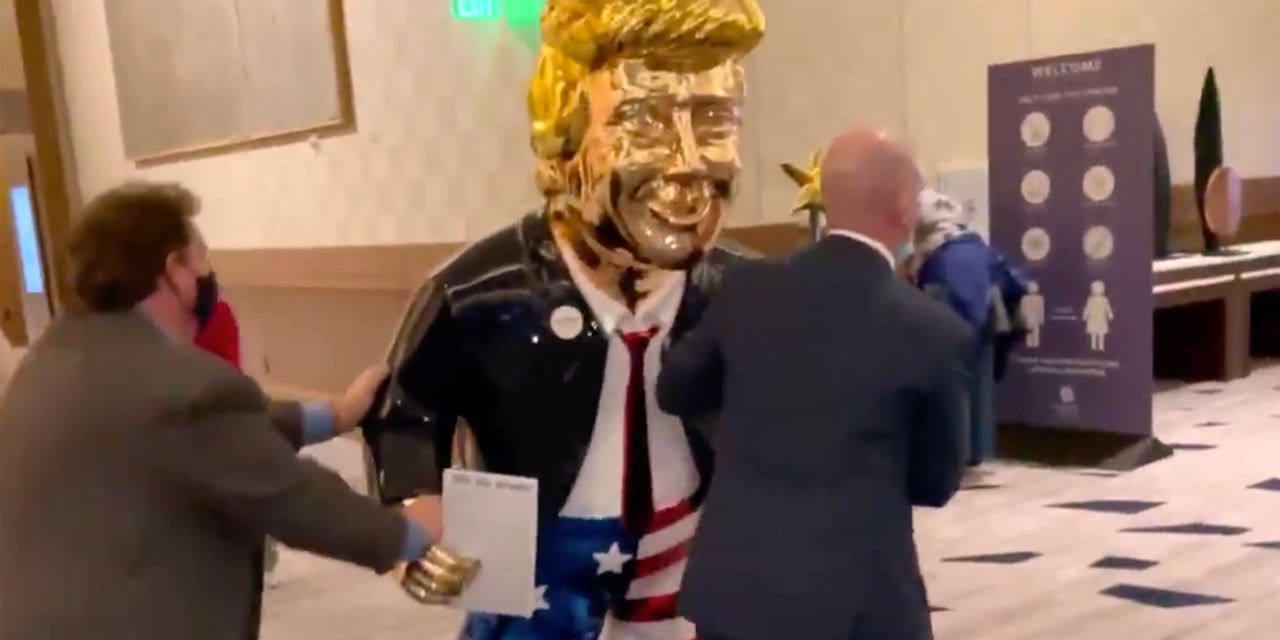 The 2021 Conservative Political Action Conference, or CPAC, kicked off in Orlando, Fla., this week with someone wheeling in a golden statue of Donald Trump.

And the inevitable comparisons to the Old Testament story of the Israelites worshiping a false idol in the form of a golden calf spread across social media faster than you can say “Moses.”

In fact, “golden calf” and related terms like “Moses” and “CPAC” were soon trending on Friday morning.

Here’s a quick Sunday-school refresher on the biblical anecdote:

While Moses was away receiving the Ten Commandments on Mount Sinai, the Israelites were suffering a crisis of faith. So they handed over their gold ornaments and jewelry for the construction of a calf to worship. This angered both God and Moses, who had recently led the Israelites away from Egyptian bondage. And upon his return, an angry Moses destroyed the false idol by burning and grinding it into a powder, scattering the ashes into water, and forcing the Israelites to drink it.

So it should come as no surprise that the golden Trump statue inspired jokes and political commentary of biblical proportions across social media on Friday. Many called out conservatives for worshiping a “false idol” by continuing to follow the former president, who was impeached twice and who has undermined the U.S. presidential election process by pushing debunked, baseless claims that an election he claimed to have won handily had been stolen from him, even as President Joe Biden racked up 7,058,909 more votes.

There were also plenty of irreverent jokes at the expense of the statue’s appearance, which gilded the former president in a pair of star-spangled board shorts and flip flops, and placed him in a stance that resembled cartoon character Bart Simpson on a skateboard, if not a Bob’s Big Boy statue.

The conservative conference this weekend will mark Trump’s first post-presidential public appearance when he delivers a keynote speech on Sunday. He is expected to tell the audience that he is “still in charge” of the Republican Party, and is its “presumptive 2024 nominee” for president.

How much of the GOP is still on board with Trump has been a topic of much debate, however. This week, Rep. Liz Cheney of Wyoming, the House’s third-ranking Republican, said that “I don’t believe that he should be playing a role in the future of the party” following the Jan. 6 insurrection at the Capitol. Trump was impeached on charges that he incited the riot, but the Senate acquitted him earlier this month, with seven Senate Republicans joining all Democrats and independents in finding Trump guilty.

Yet former Rep. Joe Walsh countered in an essay published Thursday that there is no Republican civil war. What’s more, Senate Minority Leader Mitch McConnell also said on Thursday that he would “absolutely” support Trump if he became the GOP presidential nominee in 2024, despite stating on the Senate floor just weeks ago that “Trump is practically and morally responsible for provoking the events” of Jan. 6.

The Klein Law Firm Reminds Investors of Class Actions on Behalf of Shareholders of VNTR, NFLX and VAL

The Tell: Fed should lift caps to buy as much corporate bond ETFs as it wants, says BofA

Netflix will release a new movie every week in 2021