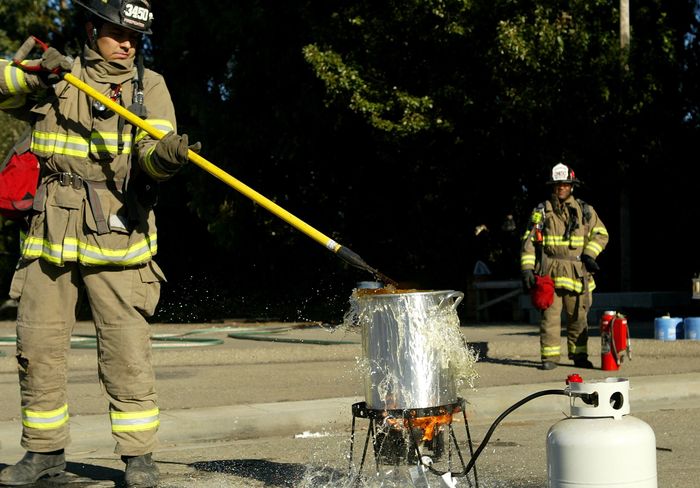 The Insurance Information Institute reports that on Thanksgiving Day there are roughly 1,000 home fires a year. Read More...

Thanksgiving may be a day for feasting with family and friends. But it also proves to be a particularly dangerous occasion, especially because of cooking-related accidents.

One of the key culprits? The increasingly popular ritual of frying your holiday turkey.

The Insurance Information Institute reports that “Thanksgiving Day is the peak day for fires caused by cooking,” with roughly 1,000 home fires occurring on the holiday annually. It also notes that fires related to turkey fryers are responsible for five deaths, 60 injuries and more than $15 million in property damage each year.

“ ‘Our recommendation is if you want a fried turkey, order one from a restaurant or grocery store.’ ”

Obviously, people can fry a turkey at any time of the year, but Thanksgiving has naturally become a big occasion to utilize this cooking method. The method has its roots in Cajun country, but it started spreading across the country in the mid-’90s and became particularly connected with Thanksgiving, according to a historical account by Vogue.

The bottom line, say fire-safety experts, is that it’s just too risky a method to try — largely because it requires heating up a huge pot of oil that can easily cause burns or start a fire if not managed properly during the cooking process.

“Our recommendation is if you want a fried turkey, order one from a restaurant or grocery store,” said Susan McKelvey, spokeswoman for the National Fire Protection Association.

Of course, turkey fryers aren’t the only cause of accidents during Thanksgiving or throughout the holiday season. And accidents do happen: 28% of Americans say they have experienced damage to their homes caused by entertaining during past holiday seasons, according to a new survey by Hippo, an insurance company.

Causes include other cooking-related mishaps, such as kitchen grease fires. And that’s to say nothing of automobile or recreational accidents during the holiday. The Insurance Information Institute also notes that brawls do break out in homes during family gatherings.

Accidents can be avoided, especially in the kitchen. Tim Malcolm, a home-care expert with Hippo, says homeowners should take simple steps to help prevent problems, such as cleaning the hood above the oven to allow for proper ventilation and making sure all the smoke detectors in the house are working. He also says that when you are cooking a holiday meal, it’s important to mind what’s going on in the kitchen and not let yourself be distracted by guests.

If you insist on frying a turkey, Malcolm says you must be situated far enough away from the house or any other structures or vegetation. “Do it at a safe distance,” he says.