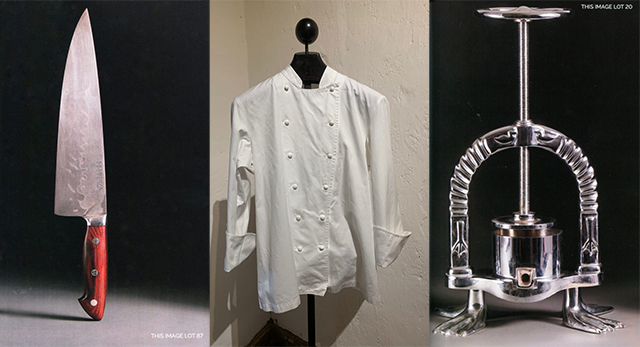 More than 200 of the late chef’s most prized possessions are up for auction this month. Read More...

These pieces of Anthony Bourdain’s estate are destined for parts unknown.

Beginning Wednesday, more than 200 of the late celebrity chef’s most prized keepsakes are being sold in an online auction that’s open to the public, with most of the proceeds benefiting the Anthony Bourdain Legacy Scholarship at the Culinary Institute of America — his alma mater.

The rest of the proceeds will go to his estate, primarily to his daughter, the auction site noted.

“The items being sold present a coherent portrait of Mr. Bourdain. They include art by Ralph Steadman (the Hunter S. Thompson collaborator and a friend of Mr. Bourdain’s) and the artist John Lurie; a steel and meteorite chef’s knife; various books, records and several manuscripts of the chef’s own work. . Many of them speak to the quiet elegance favored by Mr. Bourdain, who told Ms. Woolever that he wanted his Manhattan apartment to feel like the Chateau Marmont in West Hollywood. . “He valued comfort, and he knew what looked good,” Ms. Woolever said. “He was definitely aware of how to play to his assets. When Vogue magazine approached us to do a story about him and I presented to him, my thought was, ‘He’s not going to want this.’ As was the case with so many things, I was wrong. He said, ‘Oh I absolutely want to do this, out of a sense of sheer vanity. I’m so flattered.’”” [@Jonesieman of @nytimes – link to full article available in bio] [Photo Credit @cnn @davidscottholloway] . Property from the Collection of Anthony Bourdain will be available in an online auction from October 9-30 on #igavelauctions presented by @larkmasonassociates. Lots will be available for preview from October 2nd. Watch this space. . #anthonybourdain

The Emmy-winning host of CNN’s “Parts Unknown” and “Kitchen Confidential” died by suicide in France last year at the age of 61, just days after the suicide of fashion designer Kate Spade. (If you need help or know someone else at risk, call the National Suicide Prevention Lifeline at 1-800-273-8255.)

The Smithsonian dubbed him “the original rock star” of the culinary world, and he was credited with getting his audience to think differently about food and travel. “He was one for the first people to truly see food as a way to understand the world,” his longtime friend Matt Goulding previously told MarketWatch.

Now a year after his death, anyone can bid on his collection of artwork, books and accessories until the end of the month — as well as quirky finds like a note from Billy Joel (starting at $50) or his Hermès scarfs (starting at $40). Some of the standout items up for bid include: a 19th-century chrome duck press (estimated value between $700 and $1,000) that he acquired in Paris; his white chef’s jacket ($350); and his Peter Lovig Nielsen teak flip top writing desk ($600).

But his custom Bob Kramer knife is the crown jewel in the collection, and is expected to go for between $4,000 and $6,000. It was crafted from 800 layers of pounded steel and an iron meteorite from Campo de Cielo in South America, and took two years from ordering it to getting it in his hand. The auction site notes that Bourdain told his assistant and co-author Laurie Woolever when he ordered it that, “I might have to go back to working brunch shifts to afford it.”

Woolever told CBS New York that all of the lots up for grabs were meaningful pieces to Bourdain. ”Anything that sort of made it to the home collection was something that had a real, personal significance to him, so when I look around this room, I really see so much of him,” she said. “I see the things that he loved.”