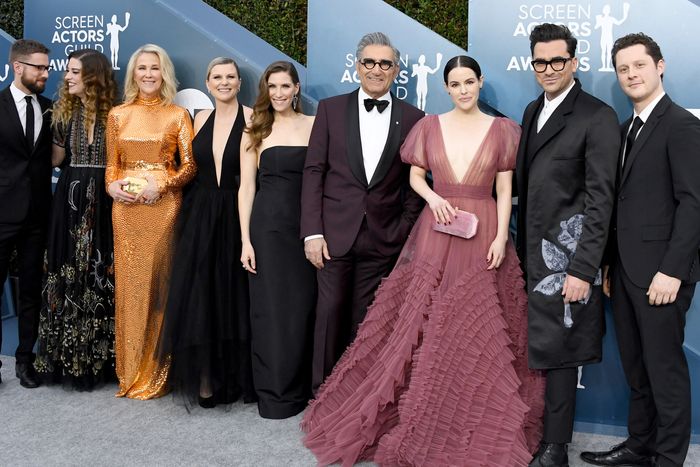 The Canadian actor making his Broadway debut in ‘The Minutes’ shares his best and worst financial decisions, what he hates spending money on, and what's next. Read More...

For Noah Reid, there is life beyond the tiny town of Schitt’s Creek.

The town, of course, is the fictional one that served as the setting for the Emmy Award-winning TV series of the same name. Reid played Patrick, the boyfriend-turned-husband of Dan Levy’s David Rose, one of the show’s ever-comical, overly dramatic lead characters.

Viewers fell in love with Patrick for just the opposite traits — his quiet, unassuming nature. And in conversation, Reid is very much the same guy — soft-spoken and humble to a turn, despite a resume that is growing all the more impressive post-“Schitt’s Creek.”

For starters, the Canadian-born Reid, 34, has appeared in dozens of films and television projects, with roles ranging from a guest appearance in the “Degrassi: The Next Generation” series to the lead in the movie “Score: A Hockey Musical” (in real life, Reid counts himself a big sports fan).

Reid is also as much a singer-songwriter as an actor — and he’s set to release his latest album, “Adjustments,” in June. (You can already listen to two of the tracks, “Everyday” and “Rivers Underground.”) But that’s far from the only big thing that’s forthcoming in Reid’s life: He and his wife, actress Clare Stone, are expecting their first child, a boy, in August.

Meanwhile, Reid is keeping busy making his Broadway debut. He currently stars in the Pulitzer Prize-winning playwright Tracy Letts’ “The Minutes,” a sometimes comical, sometimes searing look at a small American town and the big secret its citizens keep about its past. Reid, who plays Mr. Peel, the newcomer to the city council, has won plenty of praise for his performance: In its review, the New York Times said, “Reid combines the aw-shucks pluck he brought to the role of Patrick on ‘Schitt’s Creek’ with a mounting apprehension that may remind you of other creeping-realization-of-evil tales like ‘The Lottery,’ ‘The Crucible’ and, more pertinently, ‘Get Out.’”

MarketWatch recently caught up with Reid to hear about his life and career, as well as his views on all things financial — including his regret that he didn’t invest in cryptocurrency sooner. Here are condensed and edited excerpts from the conversation:

MarketWatch: Why did you choose to make your Broadway debut with “The Minutes?” What was it about this play that cried out to you?

Reid: First of all, it was Tracy Letts. I mean, if he is not the American playwright of our time then he is certainly one of the all-time greats. His work certainly speaks for itself. There’s an element of danger to his writing. There’s always something you can’t quite put your finger on in his plays. I remember reading this play for the first time and I couldn’t put it down. I was so invested in what the hell was going on. And why couldn’t I know? And of course, then you get to the end and you’ve been slapped in the face a little bit…So yeah, it was very exciting to me. This is exactly how I would have wanted to make my Broadway debut.

MarketWatch: It seems to me the heart of the play is about how we bury history, how the minutes go missing — literally. Talk a little bit about that theme and particularly why it’s so important and relevant right now.

Reid: This play is really about the foundation that we have built our society on and how we go about making decisions and addressing things that have happened in our history that are difficult to contend with. Mr. Peel is at the center of this, the kind of character who wants to be on the right side of history. He wants to ensure that he’s leaving the place better than he found it. And as the play goes on, he’s confronted with how difficult that actually is. And how far is he willing to go to make sure that that happens.

This play is probably more relevant now than it was two years ago when they were about to open it on Broadway. We’ve shifted and altered a couple of things to make it even more relevant today, but really the world around us is letting us know how relevant it is.

MarketWatch: You’ve obviously hit it big in the last few years, especially with “Schitt’s Creek.” How has that changed you personally and financially?

Reid: None of us knew that “Schitt’s Creek” was going to explode in the way that it did. And, you know, it really didn’t fully explode until we had finished making it. By the time that we were winning Emmys, we weren’t shooting anymore. But it’s definitely changed my life in the kinds of opportunities that come my way. People recognize me on the street or want to come to the Broadway show or want to come to my music tour or buy my records. I mean, it’s definitely opened up an incredible door. I think everyone involved in “Schitt’s Creek” is very proud of that show and what it has come to mean to people. Being an actor, you’re happy to be on a show at all. If you can get a few seasons, that changes the way that your life looks and the way that you’re able to approach what you want to do next and how long you can wait before you need the next paycheck. And that means you can be a little more selective (in choosing projects), which is always a very nice place to be.

MarketWatch: You’re one of those rare birds who has pursued two careers at once — in your case, acting and music. Do you ever feel like you’ll have to pick one over the other?

Reid: I think they are two tracks I’ll pursue simultaneously. They work pretty well hand in hand. In the moments when I can carve out some space for myself, I can do the music stuff, which is more personal. (As an actor) I love working on and interpreting other people’s writing, but music is a space where I can think about what I want to contribute in that sense and write from my own perspective. That’s incredibly important to me and being able to shift between those two worlds keeps me on my toes, keeps things fresh for me.

MarketWatch: What’s the best piece of a financial advice you’ve ever been given?

Reid: It was probably to buy property as soon as you can. I’m glad that my wife and I bought our house in Toronto a few years ago. We wouldn’t have been able to buy it now. In the last six months, the housing prices in Toronto have gone up like 20%. It’s an intense market.

MarketWatch: So you’re not a slave to fashion?

Reid: (Laughs.) I think my wife would probably agree with that.

MarketWatch: Conversely, what are you okay with splurging on?

Reid: Generally, [what] I feel good about spending on is music and instruments. My piano –- I bought that when I was a kid. I was in Toronto’s production of “Beauty and the Beast” and my parents cleverly tucked all that money away and invested it in a Yamaha baby grand piano. It’s been a difficult thing to find space for it in some of the smaller apartments I’ve lived in, but it’s been a really steadfast companion and has opened a lot of doors in my life.

Reid: I think I’m pretty conservative. I try to avoid those big mistakes. I was reading somewhere the other day that some CEO — I can’t remember who it was — was saying that the big mistake was not investing. Probably the biggest mistake that I made was, like a lot of people, not getting on the crypto train a little earlier.

MarketWatch: You’re young, but do you ever think ahead to retirement?

Reid: I think the best thing about a career in the arts is that you can retire if you want and you don’t have to if you don’t want to. Right now I’m working with Austin Pendleton and Blair Brown in “The Minutes. These actors…they have had incredible careers. They’re incredible people and they’re so inspiring to me. Austin is 82 and he’s up there every night and just has the audience eating out of the palm of his hand. I would love to be following in those footsteps and still be at it. I mean it’s physically demanding for me at 34. But there’s something about it that probably keeps you sharp, keeps you engaged. And keeps your feet moving.

MarketWatch: What’s the one job you would do even if you didn’t get paid for it?

Reid: Well, I can’t say acting because I want people to pay me for that. I think it would probably be something to do with sports. I’m a huge Toronto sports fan. I’d be the Toronto Blue Jays bat boy if they asked me.

MarketWatch: Are you more of a spender or a saver?

Reid: I think I’m probably more of a saver. But I live with a spender. So, you know, it’s good. We balance each other out.

MarketWatch: You’re expecting your first child. How do you think that might change your views on both money and the world.

Reid: I think it only gets scarier. I think you definitely think about money in a different way. You just want to do anything you can to ensure a stable future for your family. It’s a tricky thing. I guess I’ll find out.